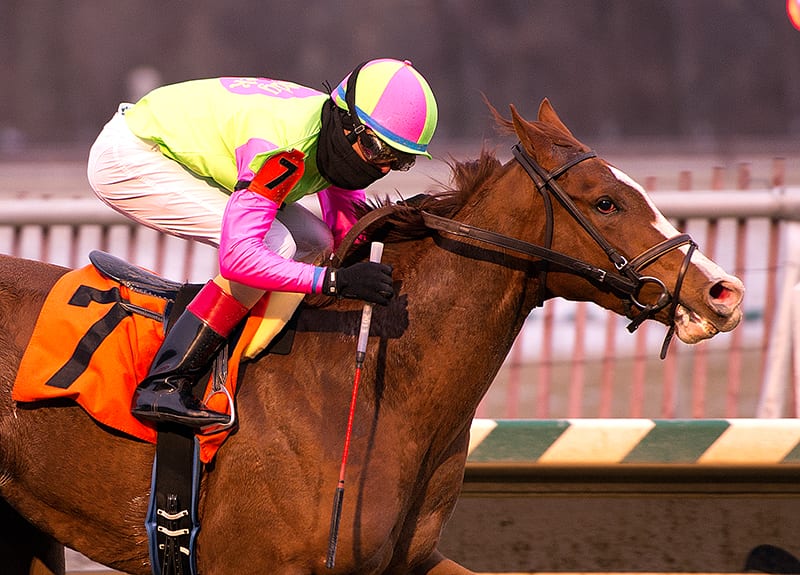 KMN Racing LLC’s Lindisfarne broke from the gate like a shot, backed off two challengers who raced to her inside and then powered by them down the lane to win the $100,000 Marshua Stakes for 3-year-old fillies, the first of two stakes races this afternoon at Laurel Park.

Both the Marshua Stakes and the Frank Whiteley Stakes, which were lost to a weather induced cancellation last Saturday, were re-carded today to highlight a 10-race program.

The winner is trained by Rudy Rodriguez. She is based in New York but had come to Laurel on New Year’s Day to win an optional allowance test. Victor Carrasco rode her that day and retained the mount as the daughter of City Zip won by a length and a half, covering the six furlong distance in 1:11.40 over the fast main track. Lake Sebago delivered a fast closing rally to take second and Comforter finished third.

“Before I rode her last time, Rudy told me that she was very nice but she could be a little nervous,” Carrasco said. “This race was scheduled last weekend and we had the number one post position but when they re-entered for today we were the seven. I think it helped being on the outside. There was a lot of speed down near the rail so I just let my filly settle. I looked back around the 5/16ths to see if Lake Sebago was coming and I didn’t see anything so I just went and asked my filly to go. She responded really well. She ran a great race today.”

Lindisfarne is now three-for-five lifetime. This was her first stakes win. She paid $12.80.