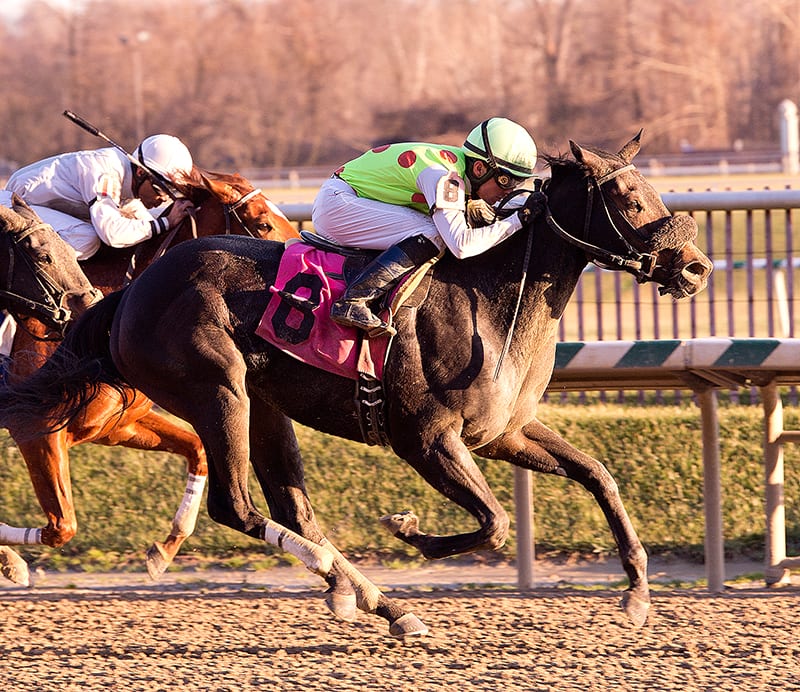 Spotted Heart was up in time to win the Maryland Juvenile Filly Championship. Photo by Jim McCue, Maryland Jockey Club.

Sheldon Russell was at the controls as the Mark Shuman trainee was winning her first stakes. The daughter of Lion Hearted broke alertly, raced near the pacesetters down the backstretch, moved extremely wide into the stretch and overcame some mild bumping before straightening away for the run to the wire. She crossed the finish line in 1:25.63 for the seven furlong distance and won by 1-1/4 lengths over program favorite Miss Bullistic. Everything Lovely finished third.

Spotted Heart came into the Filly Championship off her maiden victory, her only win in five starts, and she was passed over by the betting public, who allowed her to go off at odds of 23-1. She paid $49.40.

“We were in great position, then we went from great position to a little tight,” said Russell.  “Mark told me to try to get her in the clear at the top of the stretch. For a while it didn’t look as if I would be able to as several of the horses were getting tired and drifting out. There were horses that were faster than her, so we really needed good position to win it.”

“I thought we were in the perfect position and it went from good to horrible,” said Shuman. “At that point, with all the traffic, I was just hoping we could get up for third. Once Sheldon got her clear, she really kicked in and he got her there. We had been concerned because she has been growing so fast. We’ll just see how she comes out of this race, freshen her, or maybe not.”