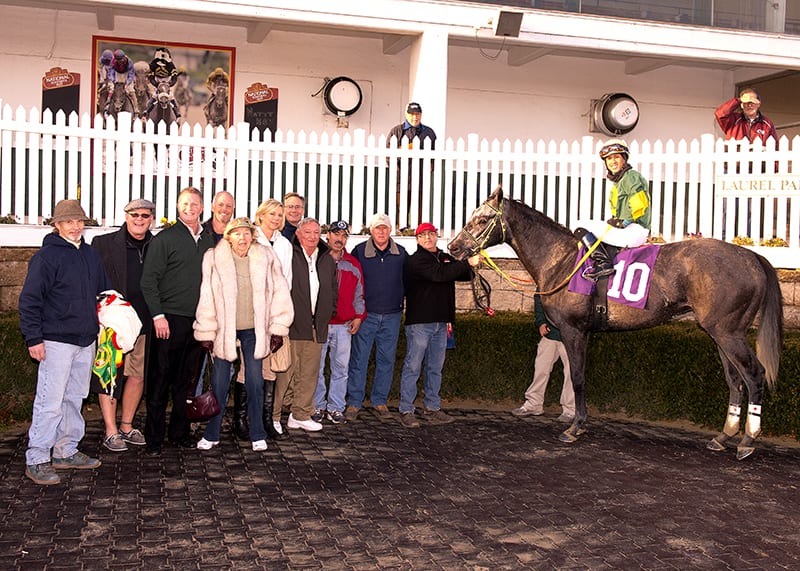 Cutty Shark was one of Victor Carrasco’s three winners on the day. Photo by Jim McCue, Maryland Jockey Club.

With four live racing days remaining in the year, Kieron Magee holds a six-win lead over Claudio Gonzalez after both conditioners saddled winners on Friday’s nine-race card at Laurel Park.

Gonzalez, who leads the fall standings with 27 winners, took the second race with Romp City ($4.20).

Magee countered by taking the eighth race with River Rush ($12.40), his 54th score at Laurel and Pimlico Race Course this year. Gonzales is second with 48. Mike Trombetta (46), Hugh McMahon (43) and Jamie Ness (42) round out the top five.

Carrasco increased his win total at the major Maryland tracks to 123, 44 behind McCarthy.

“It was done to get away from Gulfstream, which starts at 12:35,” Maryland Jockey Club general manager Sal Sinatra said. “It was hard for our mutuel department to avoid being a minute or two away from them. I would prefer to be five to eight minutes away to help increase our handle.”

Sinatra has also made adjustments to the betting menu, adding superfectas, rolling doubles and Pick 3’s and a third Pick 4, which will begin with race 4 each afternoon. Laurel will continue having two other Pick 4’s (races 2-3-4-5 and 6-7-8-9).

“This is being done to enhance our wagering menu and allow patrons to bet their favorite exotics in every race,” added Sinatra. “The extra Pick 4 will help a player who gets knocked out of the early Pick 4 but has done the handicapping to continue on and not have to wait for the late Pick 4.”