Eighttofasttocatch to be feted at Laurel Park 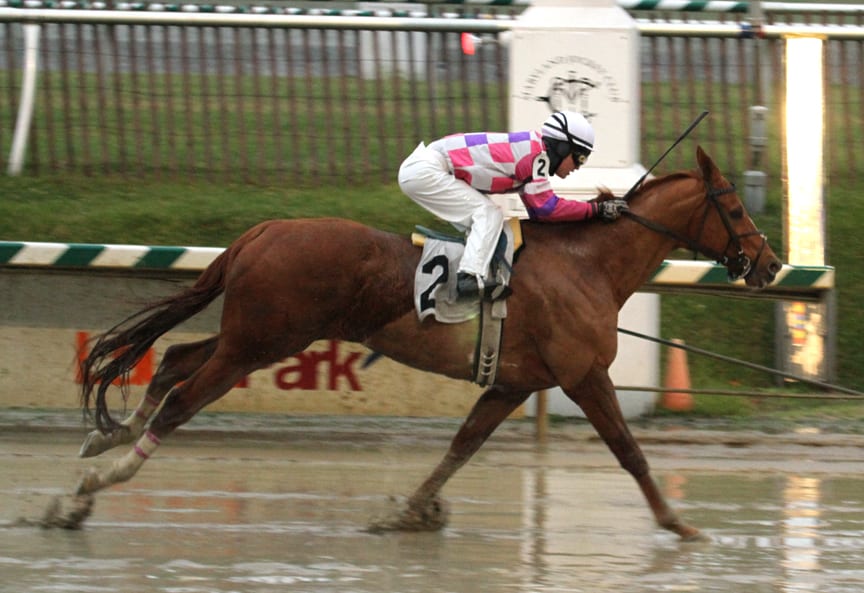 Eighttofasttocatch romped to victory in his final career start. Photo by Laurie Asseo.

Saturday’s nine-race program will also include a special retirement ceremony after the fourth race for Laurel Park-based Eighttofasttocatch, who completed his career in storybook fashion a week ago when the 8-year-old captured the Jennings Handicap for the fourth consecutive year.

Owned by Sylvia Heft and her late husband Arnold and trained by Tim Keefe, the son of Not For Love won 17 of 49 races and became the 24th Maryland-bred to reach millionaire status in his final race with a career-best 107 Beyer Speed figure.

“To say it was storybook was an understatement,” Keefe said. “I didn’t think there was going to be as much pressure but there was a huge amount of people, from my family to Arnie’s family. To have him run so well was thrilling. Disney couldn’t have written it any better.”

With his three Maryland Million Classic victories (2011, 2013-2014), the horse nicknamed Catcher joined Safely Kept, Countus In, Mz. Zill Bear, Docent and Ben’s Cat as the only runners to win three times on Maryland’s Day at The Races. He won 11 of his 12 career stakes at Laurel Park and retires ranked 19th on the all-time list of Maryland-breds with earnings of $1,072,970.

“He did things kind of quietly over a seven-year period,” Keefe added. “He didn’t become a stakes winner until he was five. He taught me to be patient. It is worthwhile and has made sense to our time with him. Every horse is different and he made me realize that. He created his own path.”

Keefe, his wife, kids, mother-in-law, members of the Heft family and the horse’s best friend, Gigi, the barn goat will be on-hand to say goodbye to Eighttofasttocatch, who will be headed to Keefe’s Montgomery County farm next week to start a new career as a three-day eventer.

“It will be good for Gigi to be there with him but she is a little nutty,” joked Keefe. “She loves to travel with him. When I took him to Keeneland in 2011 for the Fayette, we went down five days early to train. When he would go out and gallop on the track in the morning, she would be at the barn screaming. There would be people two or three barns away coming over to see what was going on. It was just Gigi yelling for Catcher.”

The ceremony will take place at approximately 2:10 Eastern. The event features a blanket presentation, video tribute and interview with Keefe in the winners’ circle.