Lady Sabelia was much the best in winning the Willa on the Move Stakes impressively. Photo by Laurie Asseo.

While there were smiles aplenty in the Laurel Park paddock – serving on Saturday as an impromptu venue for post-race trophy presentations – the connections of two open stakes winners on the card were hardly caught up in the celebrations. In fact, they deemed Saturday’s results as a stepping stone to perhaps much bigger accolades in 2015.


In consecutive stakes races on the Laurel card on Saturday, Golden Years splashed home seven lengths clear in the $100,000 Marylander Stakes for two-year-old colts and geldings, then Lady Sabelia led throughout and romped home eight lengths the best in the $100,000 Willa On The Move Stakes for fillies and mares. Though more than pleased, respective trainers, Rodney Jenkins and Robin Graham, are already thinking about bigger and better things ahead. 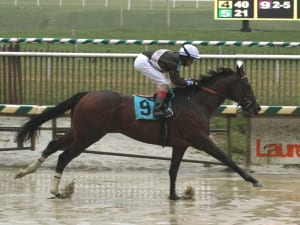 Victor Carrasco and Golden Years were much the best in the Marylander Stakes. Photo by Laurie Asseo.

Golden Years, a West Virginia-bred son of Not For Love out of the Oh Say mare, Sweet Annuity, made quick work of his rivals when he captured the seven-furlong Marylander Stakes as the 2-5 favorite in 1:24.82, a solid time for the distance over the off going and a full second faster than the clocking Lake Sebago posted when taking the $100,000 Gin Talking Stakes for two-year-old fillies andhour earlier. Golden Years, who had won his first two starts over the track, including the Maryland Million Nursery, had been fourth in the $100,000 James Lewis, III Stakes in his prior outing. But he had been working well for the Marylander and his effort gave Jenkins and jockey Victor Carrasco cause for optimism this spring.


“I was very impressed with him,” Jenkins said of Golden Years, who has now won three of four starts and earned nearly $150,000. “We fell in love with this horse the first time. I think this horse wants to go somewhere, I really do. Right now we’ll rest him until January and keep him here and give him a break.”


After his brief respite, Golden Years could point for the $100,000 Miracle Wood Stakes at one mile on February 16 on the undercard of the $250,000 General George Stakes for older horses and then the $100,000 Private Terms at nine furlongs on March 14. Both of those races could give Jenkins and Carrasco a much better gauge on how well Golden Years would handle the added distance and two turns and that, in turn, could give them and owner Ellen Charles (Hillwood Stables) added enthusiasm heading into the spring classics.

Jenkins, for one, believes that longer might be better for Golden Years.

“What I loved about today was he showed that he is going to stretch out good,” the veteran conditioner said. “After we give him some time off we’ll look for some of the longer races here in the spring and then we’ll see where he takes us. He looks like he stretch out without any trouble and that’s always exciting.”


“This horse has been training like a monster since his last race,” Carrasco added. “He got out of the gate good today and I knew [Hear The Chatter] was the horse to beat, so I just stayed close to him. I wanted to keep him out of trouble. He just carried me up to the other horse. At the top of the lane I looked back and didn’t see anyone coming. I tapped my horse one time and he changed leads. I think he will get better as the races get longer.” 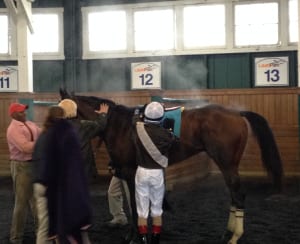 Steam rises off Golden Years’s back as Victor Carrasco takes the tack off. Photo by The Racing Biz.

Then one race later in the $100,000 Willa On The Move Stakes for fillies and mares, Lady Sabelia, with Horacio Karamanos up, lived up to her billing as the 6-5 favorite when she gained command soon after the break and then drew clear as much the best to an eight-length score in 1:10.42 for the six furlongs. It was the second straight win and fourth victory in five starts this year for the four-year-old daughter of Majestic Warrior, out of the Citidancer mare Terra Maria, trained by Robin Graham for owner-breeder Mrs. Frank Wright. As was the case with Golden Years, her connections have already earmarked a potentially lucrative path for next year.


“I think she’s good enough for the Fritchie,” Frank Wright said in the paddock immediately afterward, referring to the Grade 2, $300,000 Barbara Fritchie at Laurel on February 14. “She could probably go straight there. She’s earned the chance to be in that race. I think she will probably need another race between now and then, but she’s good enough for the Fritchie. She ran a great race today. It was never in doubt.”


Without prompting, Graham also quipped that the Fritchie is high on her list, although the $100,000 What A Summer Stakes on January 3 is the ideal likely prep for the seven-furlong dash.

Lady Sabelia had been third while only a three-year-old facing older rivals in the 2013 edition of the Willa on the Move, but the added maturity and seasoning enabled her to make quick work of her foes in the slop on Saturday and gave Graham added confidence that she can make the ascension into graded stakes company.


“We weren’t even worried about her going to the lead,” Graham said. “We just wanted to get off the rail some. We thought she had enough speed.”