Tim Keefe ticked off the names as methodically as his trainee, Eighttofasttocatch, ticked off the quarters in Saturday’s easy Jennings Handicap victory.

“Little Bold John won [the Jennings] three times — he was a really neat horse I remember from galloping horses 20 years ago,” Keefe said.  “Algar was a pretty cool old horse… Forry Cow How… all those neat old-time horses… It kinda maybe gets [Eighttofasttocatch] in that same kind of league, which is neat.” 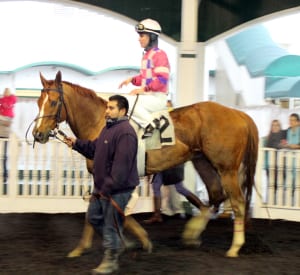 Eighttofasttocatch in the paddock after winning Saturday’s Jennings. Photo by Laurie Asseo.

Eighttofasttocatch’s 10-length victory did a lot of things: set a Jennings wins record, push the horse past a coveted earnings mark.  Close his career.  Fulfill a dream; connect past and present.

Algar won the Maryland Million Classic twice; ‘Catcher’s October win in that event was his third.

Forry Cow How won 10 races at either Laurel Park or Pimlico; ‘Catcher won 16.

‘Catcher’s owner, Arnie Heft, passed away in March.  Heft’s racing stock has been dispersed.  All except for Eighttofasttocatch, who ran Saturday in the colors of Heft’s wife Sylvia; the extended Heft family turned out in force.

“This fulfills Arnie’s dream, absolutely,” Keefe said.  “I swear he had something to do with that million.”

When ‘Catcher won the Maryland Million Classic on October 18, it pushed his career earnings to the cusp of — most folks thought a bit past — $1 million.

Most folks were wrong, though; that win left him a couple thousand bucks short of $1 million.  A fifth-place finish Saturday would have done the trick — but that wasn’t the way anyone wanted this story to end.

“The most important thing for me today was that he goes out with a win,” said jockey Forest Boyce, who flew in from her winter Louisiana base to ride her longtime mount.

“I swear [Heft] had something to do with that,” said Keefe of the narrow shortfall.  “That was Arnie’s way of making sure that the estate lawyer let me run him in this one more time.”

And so Eighttofasttocatch faced the starter one last time on Saturday, cruised up along the inside to take command early, and spurted away in the lane for the easiest of easy victories.

“This is the last horse I had for the Hefts. Arnie was a great owner of mine — a great supporter through good times and bad,” added Keefe.  “So I’ll miss that connection.  I’ll miss the horse — not watching him train in the mornings.  I’ll miss the people — ‘Hey, there’s Eighttofasttocatch,’ you know, everybody kind of knows him, so I’ll miss all that stuff.”

Soon enough, he’ll be on to his next career, with Keefe’s wife and oldest daughter working to turn him into an event horse.

That’s for the future; Saturday in its way was more about the past.

“Eighttofasttocatch,” said Laurel race caller Dave Rodman in the last jumps of the Jennings, “Thanks for the memories!” 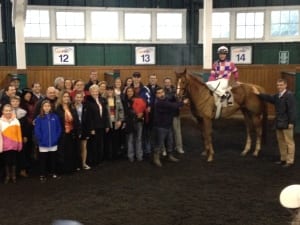 A Heft family affair. Photo by The Racing Biz.

Those memories — that fairy tale ending — are about something hard to put your finger on, yet real and enduring all the same: the connections between horses and people spanning generations, from Little Bold John to Algar to Forry Cow How and now, yes, to Eighttofasttocatch.

There’d been tears in the winner’s circle after his Maryland Million win, but Saturday’s event was remarkably dry-eyed, an end reached that felt exactly right.

Boyce, the jockey, gave Keefe a long hug.  “Send me pictures,” she said with a big smile as Eighttofasttocatch was led away.

“You don’t get to be with one horse all the time with so many tracks running,” she mused.  “But we have stayed together, and he is my true teammate.”