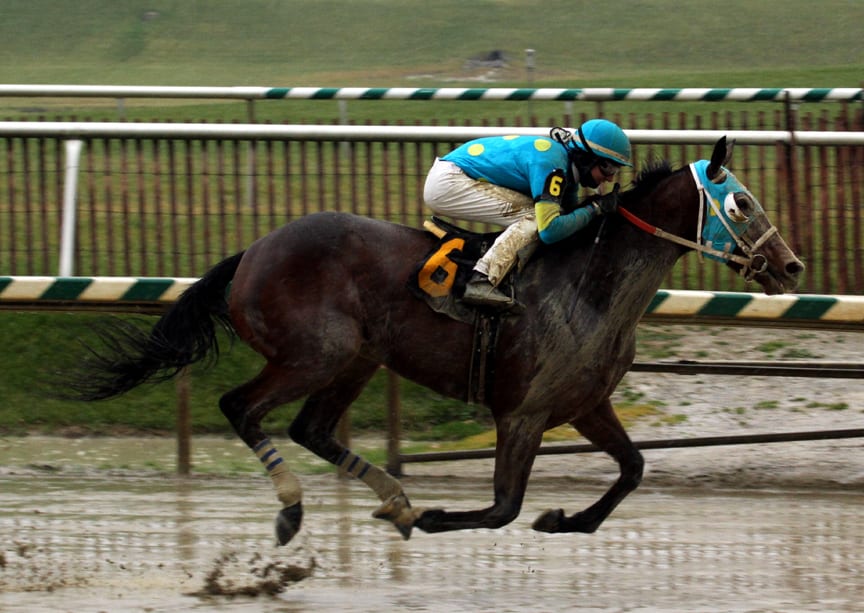 Tim E. O’Donohue Racing Stable LLC’s Lake Sebago splashed through the sloppy going on her way to a popular victory in the $100,000 Gin Talking Stakes for 2-year old fillies, the first of four stakes on a soggy Saturday afternoon at Laurel Park.

Sent to post as the 4-5 favorite under leading jockey Trevor McCarthy, the daughter of Munnings tracked the speed down the back side, split rivals through the turn and swept five wide into the stretch. The winner, who is trained by John Robb, reached the finish line two lengths ahead of Darling Sky, while Pistolina finished a late closing third. Lake Sebago completed the seven furlong distance in 1:25.98.

“The blinkers have helped her a little bit,” said Robb. “She’s never run a bad race. She had run twice in the mud, so that was not a concern. She ran as expected. We expected her to come from off of it.”

“I entered this race with a lot of confidence in this filly,” said McCarthy. “She kind of fools you the first part of her races. She doesn’t really act like you’ve got a lot of horse but when you get to the turn she gets into the bridle and it’s a whole new ball game. She was looking at those other horses turning for home because we’re usually on the inside and being out in the middle was a little new for her. Typically, on sloppy tracks, that’s the best place to be so I put her where we wouldn’t get in any trouble and in the end I had the best horse today.”

Lake Sebago entered the Gin Talking off a 27-1 upset victory in the Smart Halo Stakes in her previous start.  Today she paid $3.60.