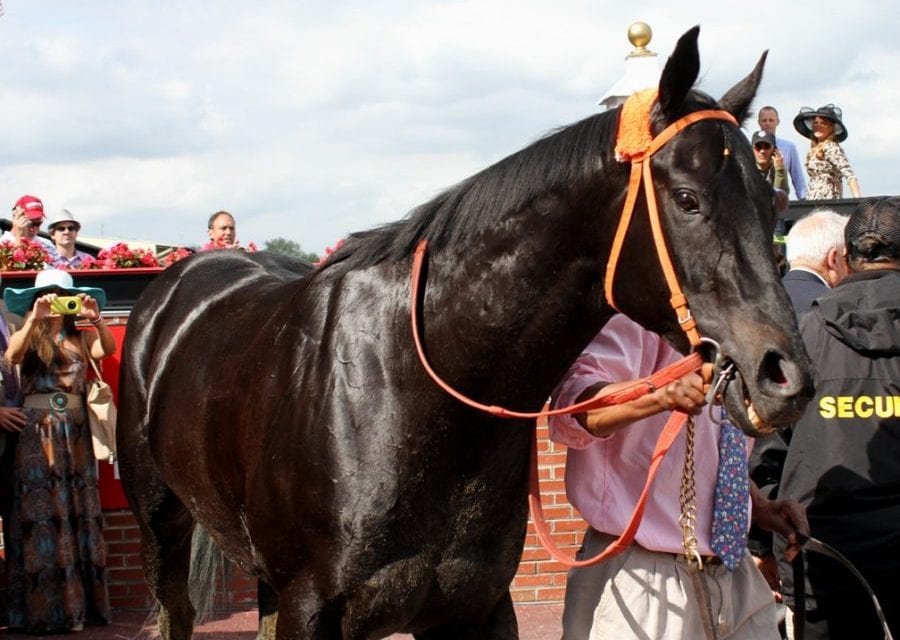 Ben’s Cat has made a career — and what a career! — out of arriving just in time.  Neck, nose, and head victories dot his past performances.

But on Saturday night, at chilly Penn National Race Course, the eight-year-old tried something entirely new.  Under an astute ride by Julian Pimentel, Ben’s Cat stalked what was for a half-mile a four-way pace duel, angled outside nearing the lane, and romped to a 3 1/4-length victory over an accomplished field of older sprinters in the six furlong Fabulous Strike Handicap.

Bred in Maryland, owned, and trained by King Leatherbury, the son of Parker’s Storm Cat has now won the $200,000 Fabulous Strike — originally scheduled for Thanksgiving even but postponed because of the weather — three consecutive years.  He has won 28 of 45 career starts and earned over $2.3 million.

When the gates opened, speedy local King Henry, turf star Tightend Touchdown, post-time favorite River Rocks, and Grade 1 winner Strapping Groom immediately set sail for the lead, running four across the track.  They blazed through an opening quarter mile of 21 3/5 seconds and a half in 44 3/5.  Ben’s Cat sat just a length-and-a-half off that group.

Ben’s Cat, off the rail, tipped wider nearing the lane, cruised up to command, and opened a yawning gap between himself and his pursuers as Pimentel kept him to task.  Running time for the six furlongs was 1:09.46.

Strapping Groom, who finished sixth, broke down after the wire and was vanned off.  He suffered broken bones behind his right knee and, according to trainer David Jacobson, has been retired…

There were three other stakes on the docket this weekend, two at Penn National and one at Charles Town.

In the Swatara Stakes, a $100,000 1 1/16 mile mile test for three-year-olds and up, Stormin Monarcho won the fourth stake of his career — and second straight — when he wore down game longshot Adirondack King to win by a length in 1:44.40.  Stormin Monarcho, the 6-5 favorite, was never far back under Jevian Toledo before angling out in the lane to run down his rival.  Trained by David Jacobson for himself and Lawrence Roman, the four-year-old Stormin Monarcho has now won nine of 28 starts and earned $412,281.  A pair of local runners — Van Persie and Twin Engine — were sent off at more than 100-1 by bettors; they finished fourth and fifth, respectively…

Rockin Jojo finished third as the favorite in last month’s Maryland Million Lassie, beaten less than a length for all the money.  Saturday, sent off as the favorite once again in the Blue Mountain Juvenile Fillies Stakes, a six-furlong test, the daughter of Street Magician did not disappoint.  Never far back while racing in the four-path, Rockin Jojo, ridden by Trevor McCarthy for trainer Bernie Houghton, powered home to win by 1 1/2 lengths in 1:11.44.  She has now won two of five starts, and the victory in this $75,000 event pushed her career earnings to $101,050.  She was bred in Pennsylvania by David Miller and Skymarc Farm and is owned by Michael Cox…

Saturday evening’s West Virginia Futurity ended up being the John A. Casey Show.  The veteran trainer sent out the top three finishers in the $50,000, seven-furlong event for juvenile state-breds, and the best of all was the flashy Hear the Chatter, who posted his fifth win in six tries, fourth against state-bred stakes company, and pushed his career earnings to $175,776.  Bred by owner Kristy Petty, Hear the Chatter, a gelded son of Mass Media, shot to the lead and didn’t look back, posting a three-length victory as the 1-5 favorite in 1:27.26.  Two-year-old allowance runners one race previously took 1:29.43 to cover the same ground.  Casey and Petty also sent out the second-place finisher, One More Time, while Casey both trains and owns the show horse, Too Much to Do… 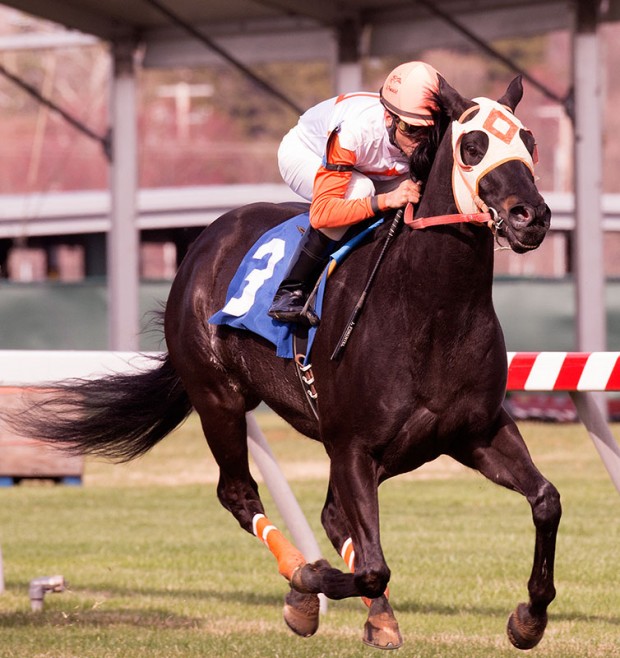 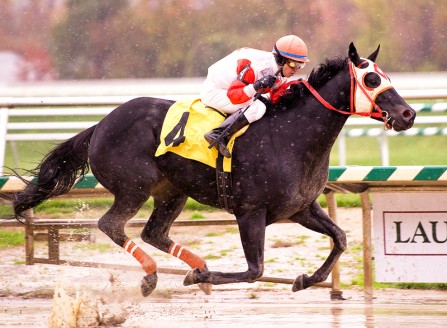 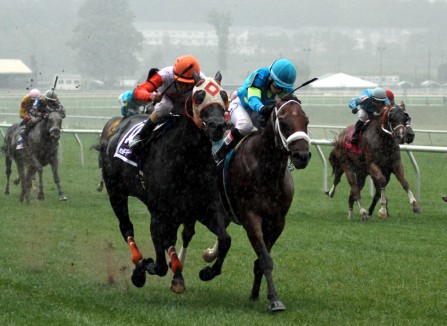 Ben’s Cat and Mr. Online in the 2013 Laurel Dash. Photo by Laurie Asseo. 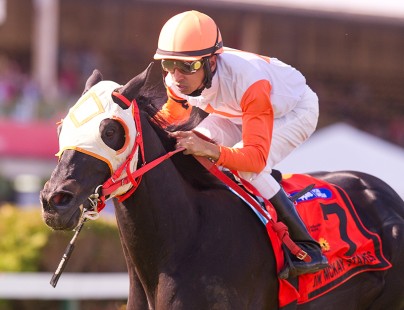 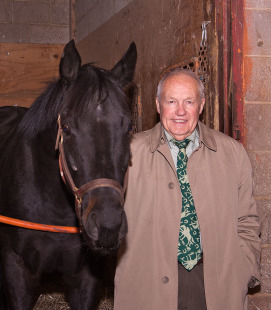 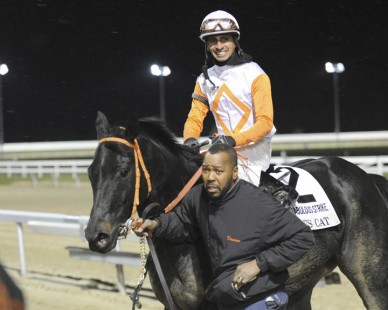 Julian Pimentel aboard Ben’s Cat after the 2013 Fabulous Strike. Photo by B & D Photography. 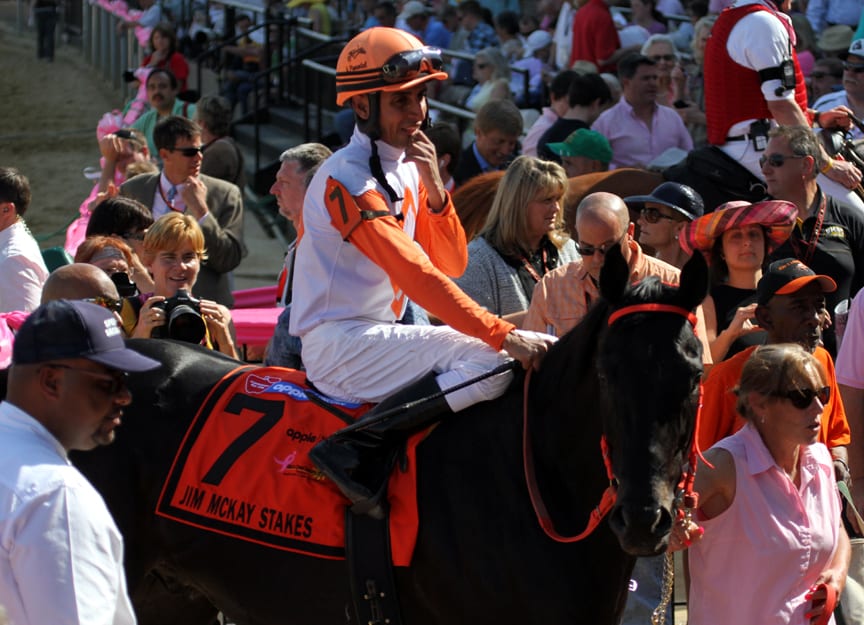