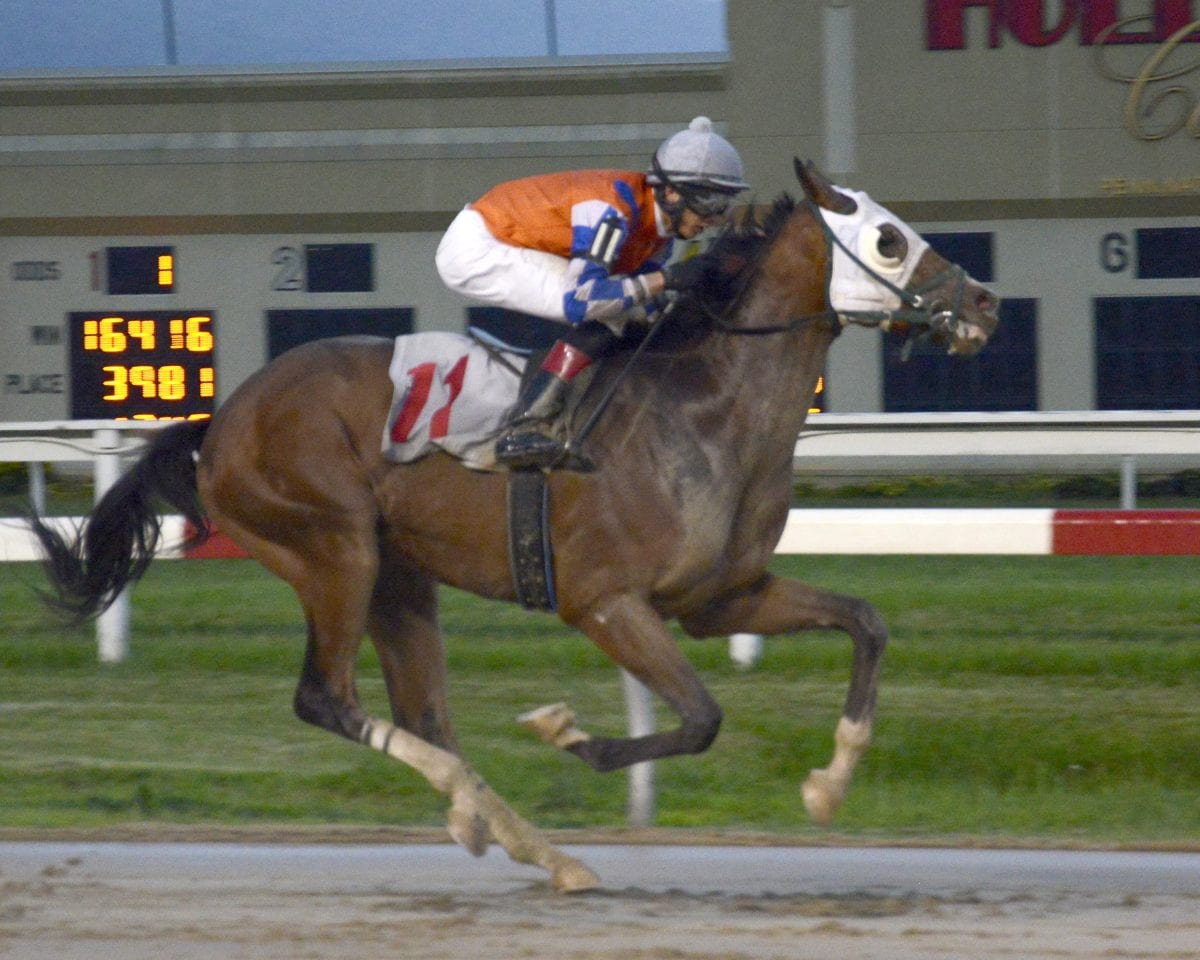 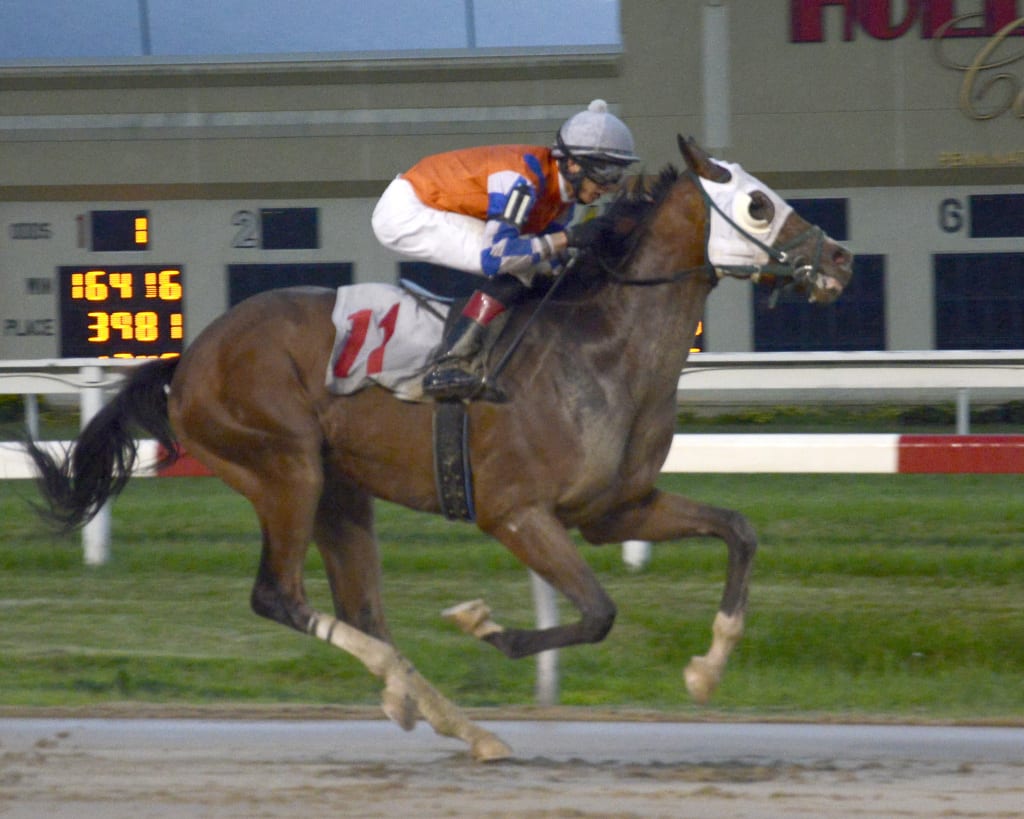 Van Persie, here running at Penn National, will be a longshot in the Swatara. Photo by Donna Kovalchick/B & D Photography.

The $100,000 Swatara Stakes is one of three added-money events headlining the card at Penn National Race Course on Saturday, November 29, and the 1-1/16 mile test has drawn a wide-open field of seasoned campaigners.

The three stakes had originally been scheduled for Thanksgiving eve, but moved to Saturday because of inclement weather.

Of the 11 entrants in the Swatara, nine are from out of town, including morning line favorite Stormin Monarcho and 8-1 Wealth to Me, from the David Jacobson barn; second-choice Ground Transport, courtesy of trainer Mike Stidham, and third-choice Integrity, from Chad Brown.

The two locally-based runners, Z and Z Stables’ Van Persie and Blackjack Stables’ Twin Engine, are not without talent, but have been tabbed by the Penn National oddsmaker at 50-1 and 30-1 in the morning line, respectively.

Those high early odds, however, have done nothing to dissuade each horse’s connections from starting in the Swatara. In fact, each trainer might be facing a tall task, but neither has let the morning line influence the decision to run.

Trainer Michael Zalalas, one-half owner of Z and Z Stables with his brother Angelo Zalalas, said he is hoping that the track comes up sloppy for the Swatara, which would enhance Van Persie’s chances greatly, he believes.

“I know he loves a sloppy track,” said Zalalas, who currently has a dozen horses in training at Penn National, four of which are for outside owners. “His (speed) numbers go up on an off-track. He might not be this caliber of horse on a fast track, but we’re going to run, no matter what the track is like.”

Van Persie, a son of Medallist, was bred in Pennsylvania by Angelo Zalalas and is out of the unraced Peaks and Valleys mare Shar’s Smile. He was foaled on June 1, 2010, at Northview-Pa, where Zalalas keeps six mares and where Medallist stands.

The chestnut gelding broke his maiden against special weight competition at Penn National in his first career start as a 2-year-old, and won multiple allowance races at the Grantville oval prior to placing in his first stakes race, the $75,000 Robellino Stakes in August at Penn, against state-breds.

Prior to being entered in the Swatara Stakes, Van Persie was third in a one-mile allowance/optional claiming event at Laurel Park October 11. In that event, which was contested over a wet track, the gelding rallied four-wide but ran out of real estate in time to catch leader Warrioroftheroses.

“That was a tough race, a tough bunch of horses,” said Zalalas, who’s been training for three years. “Plus, his best races have come at distances longer than a mile, so the Swatara should suit him much better.”

Zalalas said that Van Persie, who has won five times from 28 starts and earned $156,658, is a well-behaved, attractive horse that has been a joy to train from the beginning.

“He has incredibly long legs, so when his racing days are over, he’ll make a nice jumper,” he said.

The other Swatara longshot that is based at Penn National is Twin Engine, given a 30-1 chance by the Penn linemaker.

A 4-year-old Kentucky-bred colt by Mr. Greeley, Twin Engine races for the Blackjack Stable of owner Michael Pettas, and is trained by Paulina Sinnefia.

While Twin Engine may be a relative newcomer to the Penn backstretch, Sinnefia and her husband, Dimitrios K. Synnefias (also a trainer), have been domiciled there for nearly 15 years, having come to Grantville via the Suffolk Downs-New York-New Jersey route. 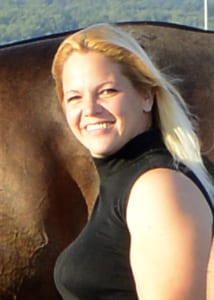 Paulina Sinnefia will be looking to pull a shocker when she sends out Twin Engine in the Swatara. Photo by Donna Kovalchick/B & D Photography.

A $125,000 Keeneland September purchase, Twin Engine broke his maiden at first asking at Ellis Park in maiden special competition, racing initially for Six Column Stables and trainer Carl Bowman, who signed the ticket for him at Keeneland.

While he has never competed in a stakes race, Twin Engine did win against allowance company at Indiana Grand, Tampa Bay Downs and Churchill Downs, and placed twice this summer in allowance company at Saratoga before being claimed by Pettas for $25,000 at Keeneland October 14. The colt, who has won four times from 25 starts and earned $123,581, arrived at Sinnefia’s barn in early November.

“I wasn’t surprised he was 30-1 against this field (in the Swatara),” said Sinnefia. “I was expecting him to be high odds. But he’s doing good, and you just never know what might happen. We’re taking a chance. He had a nice workout here (five furlongs, 1:01 4/5 on Nov. 15), and he had been facing some good company at other tracks, so we’re hoping he might do something.”

Sinnefia, who has won 10 races this year, said she and her husband combined condition 15 horses.

“We really like it here at Penn National,” she said. “And it’s a really nice area to live year-round and raise children.”