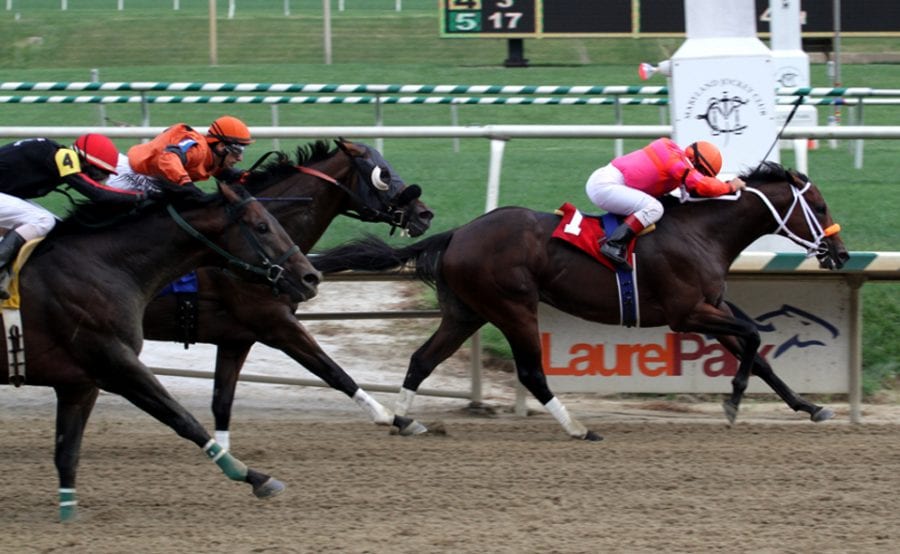 King Henry (#3) was a game second, to Bern Identity, in the Dave’s Friend at Laurel in September. Photo by The Racing Biz.

NOTE: Wednesday’s Penn National card has been canceled and will be held instead on Saturday.

But no runner in the 12-horse field will feel more at home under the lights than locally-based King Henry.

King Henry will enter the race with four consecutive bullet works over the strip — most recently, a three-furlong drill in 35 3/5 seconds last Friday — and four wins in seven local tries.  Local rider William Otero will have the mount. 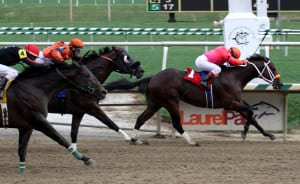 King Henry (orange silks in between horses) was a close second in the Dave’s Friend. Photo by Laurie Asseo.

That’s not to say the competition won’t be stiff.

Ben’s Cat, the ageless, eight-year-old gelding owned, bred and trained by King T. Leatherbury, will arrive as the two-time defending champion of the Fabulous Strike and easily its richest starter with over $2.2 million banked in a 44-race career.  Strapping Groom, winner of the Grade 1 Forego for trainer David Jacobson, figures to be formidable.  Turf speedster Tightend Touchdown, runner-up in the 2013 Breeders’ Cup Turf Sprint, and morning line choice Bern Identity are also likely to figure in the outcome.

“He gets over the track really well and he came back in good order [from his last],” added Kreiser. “That’s why we figured we would take a shot with him in the Fabulous Strike. He loves training and racing over this track. We’re going against some really tough horses, like Ben’s Cat and Bern Identity, but he’s always done so well here we figured it was worth it to take a shot at the big money.”

A six-year-old Congrats gelding out of Wood Witch, by Woodman, King Henry sports a solid 3-5-2 slate and $123,300 bankroll from 11 starts this year, including a score in the Penn Dash over this track on May 31. It was his second consecutive win in the that event.

Excluding a rough-trip fifth in the Fort Delaware Stakes back in July, King Henry has done nothing but run good races this season.  He finished second to Bern Identity in the Dave’s Friend Stakes at Laurel Park in September, then followed that up with a third-place finish in a $55,000 allowance at the same track.  Two of the runners from that race returned victorious in their next, and the field also included multiple Grade 3 winner Sage Valley.

Not too shabby for a horse who was a modest $13,000 claim by Kreiser and owner Ronald Ulrich in January 2013.  Since then, he has divided his time almost equally among minor stakes, allowance races and starter races.  Four of his last six starts have come in stakes company.

“The main reason we claimed him was because he looked like he could do well in the starter handicaps here and maybe even the allowance races,” Kreiser said. “He was running low-80’s [Beyer speed figures] and those types of horses usually do well in the starter handicaps here. He’s been doing a lot better than that since we got him, so we always look for some small stakes or allowance races where it looks like he’ll have a shot.”

Two of his rivals from the Dave’s Friend are slated to face him again here.  Trickmeister — third behind Bern Identity and King Henry — hasn’t run since.  Bern Identity, meanwhile, competed earlier this month in the $350,000 Frank J. De Francis Memorial Dash, finishing third.

“I was kind of surprised to see Bern Identity right back in here this week,” said Kreiser. “Maybe we’ll have a little freshness edge on him this time. My horse is training well for the race and he loves this track, so we’ll take a shot and hope for the best.”

Despite King Henry’s strong overall record — and solid performance at Penn National — he has only a modest 3-11-6 slate and earnings of just over $185,000 from 26 outings at the six-furlong distance. Two of his three wins this year have been at 5 1/2-furlongs, while the other occurred in the five-furlong Penn Dash on the Penn Mile undercard here Memorial Day weekend.  He hasn’t won going longer than 5 1/2 furlongs since February 2013.

“I’m not worried about the distance,” Kreiser said. “I know the King will give us his best effort.”

With Ben’s Cat, Bern Identity and Strapping Groom likely to vie for favoritism, King Henry may only receive modest support at the windows.  But his fondness for the surface in races and recent workouts will perhaps give his connections and his backers ample optimism on the Thanksgiving eve.