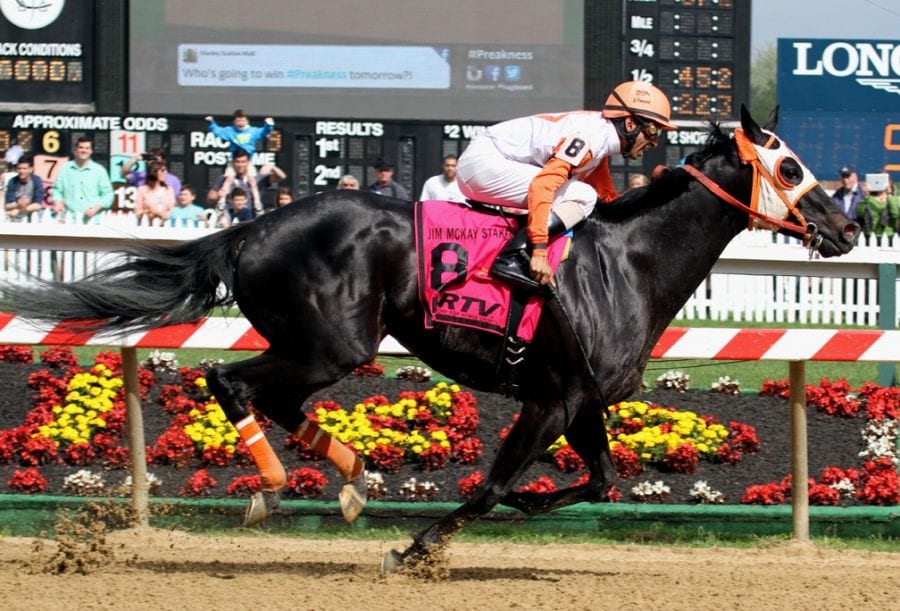 The Jim Stable’s Ben’s Cat and a pair of graded winners from the Linda Rice barn in Palace and La Verdad highlight the list of 50 nominees for the Fabulous Strike Handicap to be run on Wednesday, November 26 at Penn National Race Course.  The $200,000 Fabulous Strike serves as the feature race on Penn National’s 2014 Penn National Holiday Racing Festival program, which also includes the $100,000 Swatara and the $75,000 Blue Mountain Juvenile Fillies. The three stakes will all be part of an early Pick 4, which begins with the first race at 6:00 pm EST.

Trained by King Leatherbury, Mid-Atlantic sprint superstar Ben’s Cat appears probable to return to the Penn National oval and defend his title in the Fabulous Strike.  In the race’s 2013 edition, the now eight-year-old won a thrilling stretch drive to prevail over Ribo Bobo by a half-length.  One of most popular and durable sprinters in the region in recent memory, Ben’s Cat has won 27 of 44 lifetime starts and banked more than $2.2 million in earnings. However, Ben’s Cat will enter the Fabulous Strike off three straight defeats following his win in the Parx Dash (G3) in July. In his most recent start, he checked in second, beaten just a half-length, in the Maryland Million Turf.

Also nominated to the Fabulous Strike is Lady Sheila Stable’s filly, La Verdad.  Trained by Linda Rice, La Verdad has won 10 of her 15 lifetime starts including a win in the Distaff Handicap (G2) at Aqueduct earlier this year. Should the daughter of Yes It’s True contest the Fabulous Strike, it would be her first start outside of the filly and mare ranks. Rice, who grew up in Hershey, also has multiple Grade 1 winner Palace, most recently sixth in the Breeders’ Cup Sprint, nominated.

While the Rice and Leatherbury runners appear formidable, they are far from the only horses having competed against upper level competition as the Fabulous Strike nominations drew a total of 16 graded stakes winners – a figure which represents nearly one-third of the list.

Included in that list are Strapping Groom, winner of the 2013 Forego (G1) at Saratoga, a trio for trainer Reade Baker in Bear No Joke, Go Blue or Go Home and Sharp Sensation as well as Solutos Amigos and Bourbon Courage, both of whom are exiting the Breeders’ Cup Sprint.

In addition to the graded winners, the hometown hopes appear to lay with Ronald Ulrich’s King Henry, trained by Tim Kreiser.  King Henry, victorious in the Penn Dash on Penn Mile day, has won 3 of his 11 starts so far in 2014.

In addition to a great group of sprinters, the $100,000 Swatara, at one mile and one-sixteenth, drew a total of 38 nominations, including Robert V. La Penta’s Easter Gift. Trained by Chad Brown, Easter Gift won the 2013 Mountainview Handicap at Penn National defeating, among others, Pants on Fire and Macho Macho in the process.

Nominations for the restricted $75,000 Blue Mountain Juvenile Fillies at Six Furlongs will close on Saturday, November 15, 2014.

The Fabulous Strike and Swatara will also serve as the final two races in the inaugural Penn Gaming Racing Challenge, which ties together more than 20 stakes worth more than $5.5 million at Hollywood Casino at Penn National Race Course, Hollywood Casino at Charles Town Races, Sam Houston Race Park, and Zia Park.

Owners, trainers and jockeys compete in the series of unrestricted stakes races and the leaders in each category at the end of the contest receive a trip to the Penn National Gaming owned M Resort in Las Vegas.  The winning owner and trainer will also have all entry and starting fees covered for unrestricted stakes races at Charles Town, Sam Houston, and Zia Park for the following year.