Chartcallers: Eyes and ears of the betting public 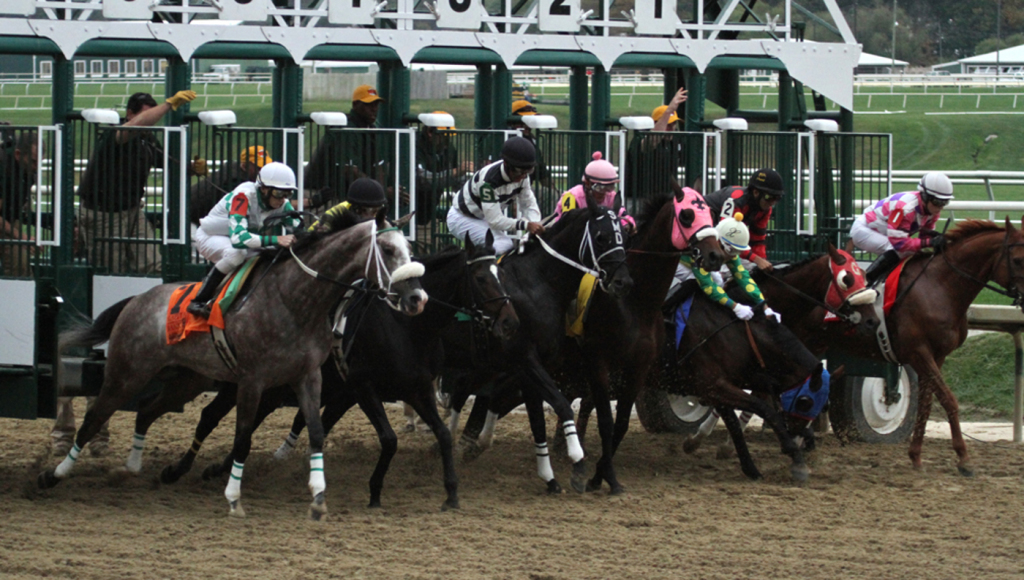 The break from the gate can be crucial in a race. Note the 3-horse stumbling here. Photo by Laurie Asseo.

Everybody in racing — from the serious bettor to the casual fan to the person doing the race charts — watches races.

But how many of them really see what’s going on?

In other words, do you know how to gain insight and information from watching a race?  How to observe and retain information as the race is run live?   How to use pan and head-on angle replays to confirm your initial findings and perhaps uncover other bits of information that may have affected the overall race scenario or a single horse’s performance?

For chartcallers, of course, those abilities are their stock-in-trade.  But anyone who plays the ponies can benefit by learning from the guys with the binoculars: how they train their minds so that when the gates open they can follow a full field of horses, call out their numbers and margins between horses and still retain an overview of the race as a whole.  We’ll also point out where sharp chartcallers look for potential trouble during a race.

GETTING IN A RACE-WATCHING FRAME OF MIND

So how can a single person call the positions of 12 horses five times in just over a minute, be accurate and still observe and retain what happened in that time frame?

It’s about training your mind. Good chartcallers learn how to train their minds to, in a sense, go into a type of tunnel vision of the mind. They learn how to focus completely on their field of view and how to block outside distractions like noise and movements that don’t relate to the race. Of course you may not easily attain that level of concentration but simply learning to ignore things like other fans pounding on their programs or yelling will allow you to focus on, and retain more from, the race you’re watching.

Valentine emphasizes the importance of learning to see.

“If you’re going to hope to do any good betting horses you have to learn that even though you may have bet a particular horse in a race you have to learn to watch others in the race as well,” he points out.  “I can’t tell you how many times I’ve watched a race where I bet on one horse and spotted something about another horse that I profited from later.”

KEY POINTS DURING A RACE

Obviously, the start of any race is important.  In this speed-consumed world of American racing, how a horse breaks can be crucial to their success or failure. And chartcallers watch starts carefully.

But good chartcallers look for more than just the horses that stumble, are bumped hard, or who get away poorly. They watch for horses that break awkwardly, whose feet are not straight at the break, horses where the ground breaks out from under their feet, and horses that may pause just that split second when the doors open. Technically these horses didn’t break poorly but they also didn’t break with their fields and that often costs them their best chance to win.

“Watch horses at the start then pay particular attention to those horses after the start,” Valentine, the veteran chartcaller, advises, “Often times the ground will break out from under a horse’s hind legs at the start and they’ll lose all traction during a critical moment. This is hard to see and you have to learn how to watch underneath the stall doors carefully to pick this up.”

Yet it’s not just those key moments that Valentine watches.  A horse who packs it in after a bad start might be a toss next time out, while one who fights on might be worth watching.

“After the start, if that horse [who broke awkwardly] is able to make his way up through the field to a contending position and is able to hold that position at least until the stretch, then that’s a horse I’ll put on my list and look to bet on next time out,” he says.

One of the key moments in any race is when the field enters turns. It’s the spot where riders have to make important decisions concerning what they’re going to do with their mounts. And when horses change leads into the turn they may pitch to the inside or outside causing the rider to have to act quickly to maintain control. This can often cause riders close to the horse in question to steady, check or alter course to stay safe.

Horses can also be trapped, or “boxed in,” going into and through turns with horses in front and outside them. Having no place to go and being forced to restrain his mount can prevent a jockey from getting the horse clear to run on until it’s too late.

An important fact that is often overlooked is how important placement from the inner rail is through the turn. At many tracks, a horse who is hung four or five wide through the turn, especially in a sprint, loses almost any chance of being competitive.

This is crunch time in a lot of races. When the field turns into the stretch there are all sorts of scenarios that can occur. Horses can drift wide or swerve inside or outside as they again change leads for the run to the wire. Traffic can force a horse to alter course and swing to the far outside, thus losing momentum and making it even more difficult to win from their far outside position.

A lot of people tend to relax their concentration in the late stages of a race unless they’ve got horses in contention.  That’s a mistake. Even in a race where a horse is a runaway winner there are still things that can be learned. Often behind a runaway winner is a pack of horses. Sometimes there are horses that have may encounter traffic problems or have no place to run free until it’s too late. That could make the difference between a horse finishing second or seventh. Also watching how horses finish, no matter where they are in the field, can be helpful the next time they run. Even watching how a horse “goes out” following the finish can provide valuable insight into the horse’s ability and potential. Horses who do this are called “out well” horses, and some sharp handicappers have done quite well over the years noting “out well” horses and betting on them the next time they ran.

Of course, these days you have the ability to watch races as often as you like on replay, and that’s a powerful tool available to the handicapper.  It allows you to look for the things that won’t be noted in footnotes and comments to help you to come up with future winners.

Also, watch closely how a rider finishes on a horse and how a horse responds to a particular rider. Sometimes a horse simply needs a stronger jockey, a jockey that can get them to respond and finish powerfully.

A good recent example of this is the horse Two Wonders. After winning three straight races for trainer Jamie Ness on the Tapeta surface at Presque Isle, Two Wonders was defeated on the turf at Laurel in a race where she made up ground through a very fast :23 4/5 second middle quarter only to be blocked inside in the stretch and prevented from making a late run.

In her next race, an apprentice jockey was aboard, and through the lane the young rider just didn’t have the strength and experience to get the strong response needed to contend during the crucial final furlong.

In her next outing Ness went with an older, stronger rider in Julian Pimentel. The result?  Two Wonders stalked the pace outside, ranged up four wide into the stretch, then responded to strong handling from Pimentel to get up in the final sixteenth.

Ultimately, the point is to watch each race with an open mind — and open eyes — and to use what you see to understand what really happened — and what might happen in the future.

“It’s not easy,” says Valentine.  “But if you can learn to be less emotional and more observant while watching races, it’ll pay off in the long run.”