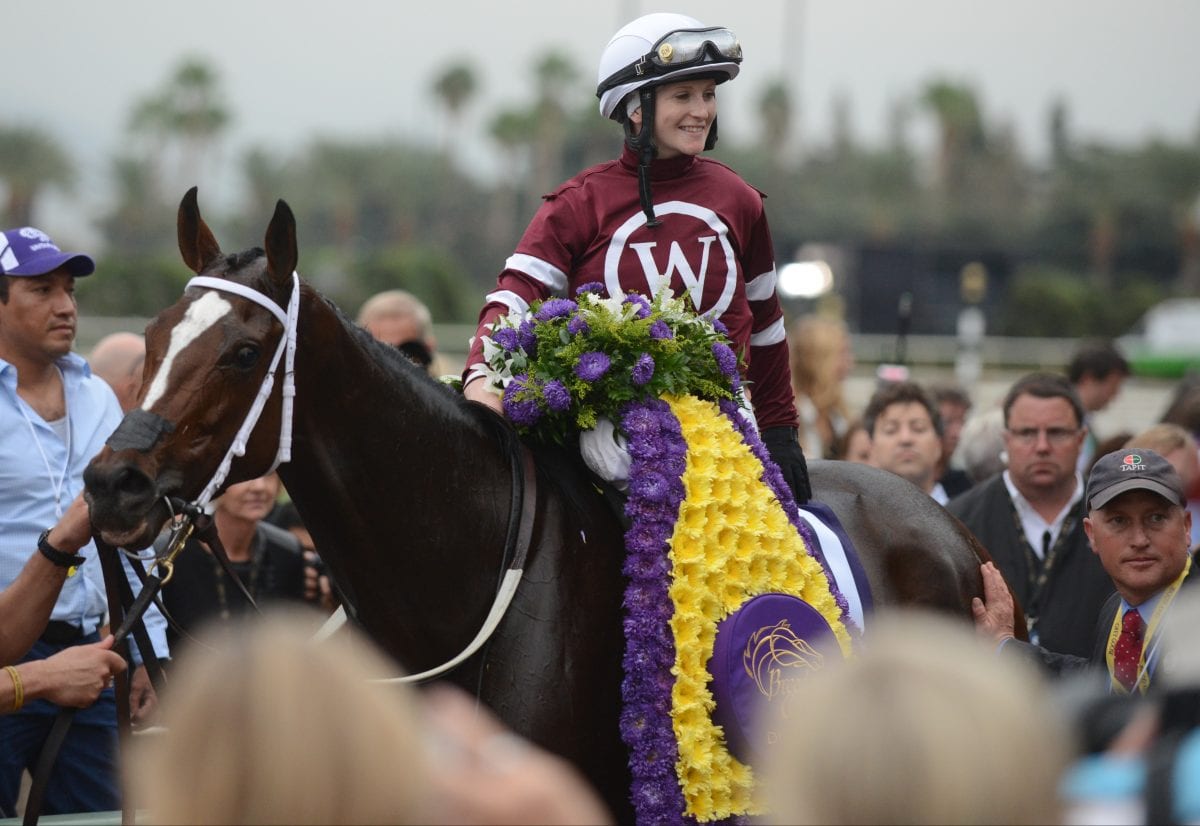 Main Sequence, on the outside, gets the better of Flintshire in the Turf. Photo by © Breeders’ Cup/Todd Buchanan 2014

The short version of the story: ouch.

The trouble started in the weekend’s first race, the Juvenile Turf.  Two of the ‘cappers — Hahn and Horvath — put Luck of the Kitten on top.  He went right to the lead, set fast fractions (including 22 4/5 seconds for the opening quarter), and stayed on gamely — but not gamely enough, as Hootenanny ran him down in the race’s late stages.  None of our players liked Hootenanny at all.

If it wasn’t, the next race surely was.  All four of our players had in mind that they would beat Goldencents, with three of them putting that runner in the place spot, and the fourth leaving him off altogether.  Needless to say, Goldencents held off Tapiture to get the money.

In the Juvenile Fillies Turf, only Nick Hahn had Lady Eli — who won ultra-impressively — anywhere on his ticket (he pegged her for second).  The horse the group liked most of all, Isabella Sings, finished 12th of 13.

In the day’s final race, the Distaff, our group hit its stride.  Its top two selections, Untapable and Don’t Tell Sophia, ran one-two.

None of our ‘cappers particularly aced Friday’s races, but Nick Hahn did achieve one unusual distinction: his top selection finished second in three of the races and third in the other.

Saturday’s handicapping was a mixed bag for our group, with some notable successes.

Gary Quill correctly pegged Texas Red’s $29.80 upset of the Juvenile, and he was our consensus second choice.  In that race, our consensus top choice, Carpe Diem, ran second; and our consensus third choice, Upstart, earned the show.  Quill’s selection was the biggest top-choice winner for the group.

Two of our group (Ted Black and Michael Horvath) pegged Main Sequence as the Turf winner (he was our consensus second choice), and his win paid $14.40.

And Horvath liked Work All Week enough to slide him in the second spot in his Sprint prediction; the Illinois-bred won and paid $40.20.  That helped Horvath be the most successful of our group; had you played $2 on each of his selections to do what he predicted (that is, his win selection to win, place to place, etc.), you’d have earned a net profit just shy of $30 on $78 invested.