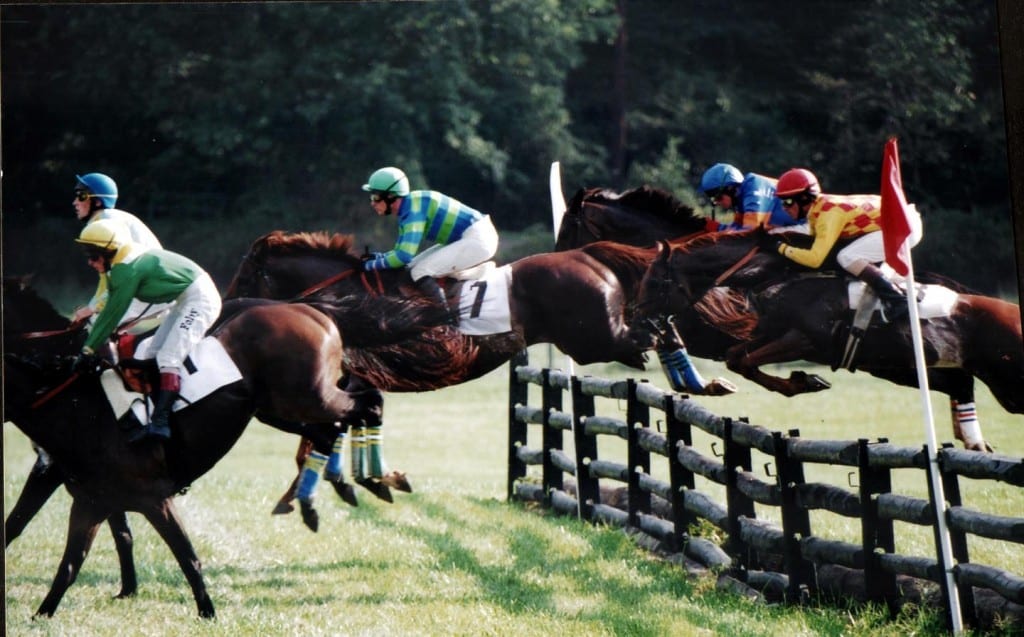 Up and over. Photo by Laurie Asseo.

On the heels of a successful September Saturday of Virginia-bred racing at Laurel, Virginia horsemen hope that Saturday’s International Gold Cup can serve as much more than a steeplechase venue.

Whether it is the pent up impact of no racing at Colonial this summer or desire to showcase Virginia’s racing health, Saturday’s event at Great Meadow in The Plains filled nine races and starts the day with an average of over nine starters per race.  Two scheduled flat races were split into two divisions.

“We’re pleased as punch that we got so many horses,” relished VHPBA executive director Frank Petramalo.

With ideal weather conditions forecasted, it’s not just the horses that may be showing up.  Last year’s autumn event drew an estimated 35,000 race goers and racing officials believe attendance may grow.  The Spring event attracted an estimated 80,000.

“Forty thousand would be a great number with so much going on,” says Dr. Al Griffin, Gold Cup’s Director of Racing, about two legged guests.   “I applaud the desire of so many reputable horsemen to give it a try perhaps as a way going forward. “

Griffin hopes Chamber of Commerce weather will work for the Gold Cup despite its being a college football Saturday that includes a Virginia home football game down Route 29, as well as many other entertainment options.

With many mid-Atlantic tracks under rainfall this week, there’s a better chance that the fields would hold together better although by first race post time scratches will likely inch the number of starters below nine per race.

“We hope to provide some hope for the sport and give these horsemen a chance to run for some money, helping during this interim period,” explained Dr. William Allison, Chairman and President of the Gold Cup.   “We’re fortunate.  We’re in a good location, we’re well supported.”

Dr. Allyson cites two priorities of the entity that own the property, the Great Meadow Foundation, as maintaining open space and providing a site for equestrian events.

“Certainly a concept I encourage everyone to look at,” advises Dr. Allyson.

On-site and off-site, on Saturday and the rest of the year, the Gold Cup races make by offering purse money and reinvesting revenues after expenses back into the purse structure.  Landowners of farms have the opportunity to generate income by means other than subdivision and development.

Allyson says that the ongoing impasse between Virginia’s Thoroughbred horsemen and Colonial Downs, the state’s lone flat track, suggests that “maybe not all the eggs should be kept in one basket” in regard to Virginia racing opportunity on the flat.  Colonial Downs concludes its harness meet Sunday, October 26, and that is expected to be followed by the termination of its unlimited license effective November 1.  Virginia’s popular traditional steeplechase circuit may become the “new-old frontier.”

Instead of bringing people to racing, Allyson wants to bring racing to the people.

Four of the nine Gold Cup races showcase the athleticism of the steeplechase racing.  Darren Nagle who rides the morning line favorite in the International Gold Cup, Dakota Slew, spoke about the nuances of steeplechase races.  What’s being jumped can impact the race.  There is a substantial difference versus brush hurdles and timber.

“You don’t want to waste too much time in the air so we want to get as quickly and accurately from one side of the fence to the other.”  Nagle explains.  “The best horses can run down and measure the fence themselves.”

Thinking of past mounts, Nagle considered Divine Fortune, last year’s Eclipse Award steeplechase champion, as a “crazy athletic” horse that was one of the best jumpers he’s ever been aboard.  There are those that could jump without effort, like Tax Ruling or Parker Project had sheer athletic ability.

Hang time is more important going over timber.  You have to be very efficient over timber, Nagle said.  Nagle recalls Professor Maxwell as one of the highest and most accurate leapers over timber.

“I hope he wins it. He won his last start well even though I didn’t think the track fit him but he found a way to win.  A bigger track and a bigger fence suit him better,” says Nagle.

Grinding Speed won this race in 2012, and he took the 2013 edition of the Virginia Gold Cup the following spring.  He’s 2-1 on the morning line.

Schoolhouse Woods (10-1) won his last start and four of his last five when he’s finished the race, including a win at Great Meadow last fall.

Straight to It ran second to Foyle in this event a year ago, and that rival won’t be in the starting gate for this year’s edition.  Straight to It is 3-1 on the morning line.

In the finale, Hard Enough passed on a race pulled from the turf at Laurel this week to run and is 3-1 in the 1 1/4 mile turf test.  Larry Johnson’s Hard Spun colt ran second in the Bert Allen at Laurel Park last month.  This year alone he has won the Grade 3 Red Bank at Monmouth Park and also owns wins at Gulfstream and Saratoga.  In the fourth race, Johnson also starts favored Grand Old Game, who won three times at Presque Isle this summer.

In the eighth race, Reid Nagle’s Daddy Kid is featured as the favorite after running second in the Hill Prince (G3) earlier this month.  He will face Daniel and Eva Smithwick’s Coturnix, who was perfect in three starts at Colonial Downs in 2013.

Tim Wooley’s Cork County has won three of his four starts this summer but deferred his favored status in the third race to George Weaver’s Monument Hill, who has been running against tough competition in New York and Florida.

All Together’s seven length win for trainer Jack Fisher at Middleburg this month was enough to provide him favored status in the $50,000 Zeke Ferguson (G3) run for the first time this year at Great Meadow.  That’s the day’s second race.

Post time for the card is 12 noon.  For “Nick’s Picks” of all nine races, please click here.