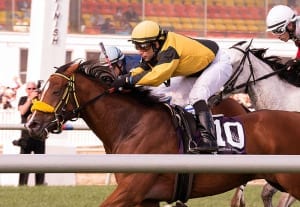 Bear Access made the early lead, controlled the pace, and held off the pursuit in a Maryland Million Ladies shocker. Photo by Jim McCue, Maryland Jockey Club.

Howard M. Bender’s Bear Access rushed to the front at the start and led the rest of the way to post an upset victory at odds of 66-1 in the $100,000 Maryland Million Ladies at Laurel Park.

Horacio Karamanos put the daughter of Gators N Bears on the engine from go, crossing ahead of the field from her outside post to reach the front passing the finish line the first time around and then moderated the tempo until they reached the finish line again in 1:54.83 over the good turf, winning by ¾’s of a length over 4-5 post time favorite Devilish Love. The 4-year-old paid $134.20.

“It impressed me how much she paid to win but I knew I had a chance,” Karamanos said. “She responded and did what she needed to do today.”

Karamanos moves into sole possession of fifth place on the all-time Maryland Million standings with his ninth victory.

Larry Murray trains Bear Access, who had never won on the turf nor raced in a stakes. She came into the race off an eighth place finish here on September 10 in allowance company.

“This filly always tries,” said Murray, who has four Maryland Million victories. “She wasn’t very impressive in her last race but she trained very well coming in here. When I looked at the program I didn’t see much speed. At 50-60 to 1, I told Horacio you might be on the front end and they might forget about you. I thought if she does 50 (half-mile in 50 seconds) she has a chance and that’s exactly what she did and then she spurted away at the 3/8ths pole and I said, ‘my gosh they won’t catch her’.”

Bear Access is the fifth Maryland Million winner bred by Bender and his late wife Sondra.

“Mr. Bender is home watching on TV,” added Murray. “It’s difficult for him to get around and he doesn’t come to the races anymore.”