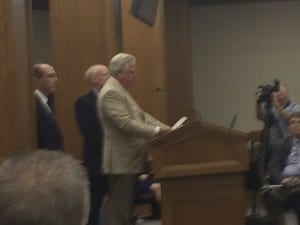 The move, before the Virginia Racing Commission, which voted unanimously to accept it, may effectively end the Jacobs era at Colonial Downs and cast the future of the New Kent County, VA track into question.

In a release, Jacobs said that he was making the move “rather than putting our industry through a painful public meeting which will benefit no one, and will just serve to polarize all the Virginia stakeholders.”

In truth, however, it is hard to see how the stakeholders could become more polarized than they already are.

Jacobs and the Virginia Horsemen’s Benevolent and Protective Association (VHBPA), which represents the Commonwealth’s horsemen, have been at each other’s throats since late 2013 over the future of Virginia racing.

Jacobs has repeatedly outlined a future increasingly focused on a small number of big days — three of them in his latest proposal, culminating with the Virginia Derby — and moves to cut Colonial’s costs for the remainder of the meet.  Foremost among those is eliminating free stabling on the Colonial backside, which would make the track perhaps the only Thoroughbred track in the nation to do so.  His latest effort would also have led to Colonial’s continued ability to accept wagering on Thoroughbred racing even without an operating contract with horsemen.

Horsemen have countered with proposals substantially similar to prior Colonial meets.  Their most recent would have led to 24 days of racing at Colonial over eight weeks and the continuation of free stabling.

“I would like to see quality thoroughbred racing thrive and Colonial Downs move towards its full potential,” Jacobs said.  “This is why I put forward this horsemen’s contract.  After 17 years, we cannot continue on any other basis.  Virginians deserve nothing less.  The Virginia HBPA does not share our vision.”

Jacobs’ certainty that he could not work with the VHBPA led to his latest — and essentially game-ending — proposal.  He supported the creation of a new group to represent the horsemen, called the Old Dominion Thoroughbred Horsemen’s Association (ODTHA).  The group, Jacobs told the Commission, is “legitimate” and “building membership every day.”

That move predictably caused outrage among many horsemen, who contend that the ODTHA is essentially a sham organization created only to serve as “yes-men” to Colonial Downs.

And it would have put the state’s Racing Commission in the uncomfortable position of choosing between the state’s established horsemen’s group, the VHBPA, which has represented horsemen for more than a decade but has been unable to forge accord with the track owner this year; and an upstart group representing essentially no one but with a signed agreement with the track operator.

In the end, Jacobs’ withdrawal of his requests, which he said was predicated on “private conversations” that he said indicated the Commission would not back his effort, spared the Commission that choice.

“[T]he glory days have faded into memory,” Jacobs said.  “I am very proud of all of the Colonial Downs’ associates and proud of what they have accomplished,” Jacobs said.  “I am sorry that we have come to this day.  Virginia horseracing must change and the change must be dramatic, with all the disruption that dramatic change brings.”