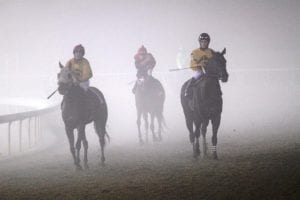 Horses emerge from the fog on opening night 2013 at Colonial Downs. Will Virginia racing do the same? Photo by Nick Hahn.

Take a step back, and this has been one of the Virginia Thoroughbred industry’s best years in a decade.

While not necessarily bearing the Virginia-bred brand, a number of horses with deep Commonwealth connections made splashes on the national scene.

Magalen Bryant’s V.E. Day won the Travers at Saratoga (not to be confused with Colonial Downs, the Saratoga of the South).  Wicked Strong, a strong contender in the Triple Crown, was stabled in Middleburg in his early days, and Arlington Million winner Hardest Core is owned in part by Virginian Rusty Carrier.  Former Orange County resident General A Rod started two Triple Crown races.

In one of coolest summers on recent record, there was a summer without a Colonial meet that would have started on the day California Chrome’s Triple Crown bid in the Belmont Stakes was thwarted by Tonalist, bred by Virginia breeders Rene and Lauren Woolcott at Woodslane. Tonalist has come back to win the Grade 1 Jockey Club Gold Cup, and now has the Breeders’ Cup Classic in front of him.  A win would give him a Horse of the Year-type resume.

If Virginia’s racing venue is far off the thoroughbred highway, the state’s horsemen are not.  That’s a lot of winner’s circle photos.

Virginia’s breeding woes can be exaggerated because many Virginia horses don’t appear as Virginia-breds.  Yet the breeding program can’t seem to provide enough incentive to tag their native foals as “VA-breds.”

And in any case, Wednesday’s Virginia Racing Commission meeting in Richmond may come to bury Virginia racing, rather than to praise it.

The outcome of that meeting may go a long way to settling the fate of Virginia’s first sport.  And, as might be expected in the state that gave us Patrick Henry, who wished for liberty, or for death, the event to come is feeling like a cross between a carnival and a riot.

There are rally shirts and Internet petitions, endorsements and personal grudges.

If you listen carefully, you’ll hear speeches being rehearsed.

For centuries Virginia breeders have produced stellar champions.  For a long time in racing history, Virginia was larger than Kentucky.  In its short existence, Virginia’s racing venue showcased champions and found a way to position its races as among the most important in the three-year old turf division.

And now it’s come to this: a commission vote on vague wording of code, one that could lead to the racetrack surrendering its license — or an ugly court battle.

“Fix it.  Do what you can to work with the parties,” Virginia’ Secretary of Agriculture and Forestry, Todd Haymore, told the Racing Commission last month, quoting Governor Terry McAuliffe.  “Colonial Downs, the Horsemen’s Association, everybody involved on the horse breeder’s side, the Thoroughbred industry, to bring the parties together.”

Easier said than done, of course, and if Haymore manages it, they should name a stakes race after him.

Tomorrow’s meeting may provide a thrilling conclusion for those who have watched this race all year.  Meetings postponed by pratfalls weather- and man-made.  The miserably failed mediation, which left the sides farther apart.  The $2 million loan offer by Colonial.  Deals struck and unstruck.  Commission mandates ignored.

All of that comes down to this: Virginia’s horsemen, through the Horsemen’s Benevolent and Protective Association (VHBPA), propose to run 24 days over an eight-week period in the summer.

Meanwhile, Colonial Downs proposes to scrap the horsemen’s group altogether, replacing it with a new group, and then to run a meet that consists of three high-end days, plus an additional 20 or so days primarily at Colonial and run as an all ship-in meet.

If Colonial doesn’t get what it wants, it says it will surrender its license to conduct racing and wagering and consider alternatives for its real estate.

While some in the state appear to think that that would be a disaster, many horsemen think it the best possible outcome.

All of which means that the sides are — still — far apart and don’t seem to be getting closer.

Even the non-racing world is paying attention this one.

So take my advice the next time you go see live racing.  Take lots of pictures, shake hands with the admission clerks when you enter and tip your tellers a little extra.  The Thoroughbred industry’s future is murky, at best, no matter how this one gets resolved.

Colonial is nearing its self-imposed wire.