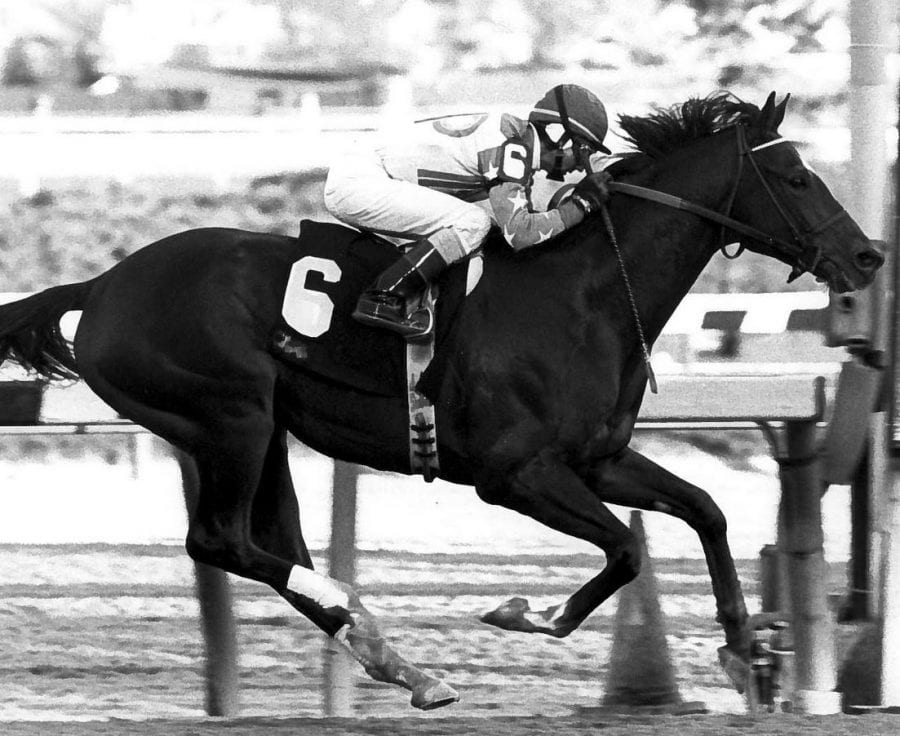 Cigar, the Maryland-bred colt who grabbed the nation’s attention during a 16-race win streak that began in 1994 and extended into 1996, has died, sources said, among them a tweet from the Breeders’ Cup.

A son of Palace Music out of the winless Seattle Slew mare Solar Slew, Cigar was 24.

Cigar, foaled at Country Life Farm in Bel Air, MD, raced in the red-white-blue colors of the late Allen E. Paulson.  He debuted with little fanfare at age three and achieved nothing of consequence until late in his four-year-old season.

Then, on October 28, trainer Bill Mott, who had tried the horse on turf and on dirt, switched him back to the dirt for a second-level allowance at Aqueduct.  Sent off as the 7-2 third choice in a field of six, Cigar recorded a dominating, eight-length victory.

In his next start, in the Grade 1 NYRA Mile, Cigar obliterated a full field by seven lengths, and a streak was born.  Before it ended, the streak included 10 Grade 1 victories, a Breeders’ Cup Classic triumph, a pair of wins in the Massachusetts Handicap, and a win in the first Dubai World Cup.

Mike Pons, who with his brother Josh owns Country Life Farm, recalled Cigar’s success in a 2013 interview.  “It was like a meteorite landed at Country Life,” he said.

Cigar earned Horse of the Year honors following his Breeders’ Cup Classic triumph in 1995, a race remembered in part for announcer Tom Durkin’s unforgettable call.  As Cigar neared the wire, a victory in hand, Durkin called him ““the incomparable, invincible, unbeatable Cigar.”  He won all 10 of his starts that year and earned over $4.8 million.

Cigar repeated as Horse of the Year in 1996, despite seeing his streak broken when second in the Grade 1 Pacific Classic.

For his career, Cigar won 19 of 33 starts and earned just shy of $10 million, an amount which stood as the record until surpassed by Curlin in 2008.

He earned admission into the National Museum of Racing and Hall of Fame in 2002 and was a member of the inaugural class of the Maryland Thoroughbred Hall of Fame, in 2013.

“He was a horse that would just imprint your heart,” Pons said.