It’s a Bang won his debut like a good thing, overwhelming a half-dozen rivals at Delaware Park to win by nine lengths.

That was on October 10; nine days later, the son of Great Notion, out of Explosive Prospect, an unraced daughter of Fortunate Prospect, showed up at Laurel Park for the six furlong, $100,000 Maryland Million Nursery.

For It’s a Bang, bred by Country Roads Ltd. and owned by Walter Vieser, II, it was a big step — but, said his trainer, a necessary one.

“After his first performance, I have to go there [to the Maryland Million],” trainer Donald Barr said prior to the race.  “Otherwise, I wouldn’t be doing justice to the owner or the breeder.”

The horse — 29-1 in his debut — was just 2-1 on Maryland Million day, making him the second-favorite in a field of six.  The race figured to come down to two horses: It’s a Bang and Joint Custody, trained by Jerry Robb.

When the gates opened, those two, along with longshot Olde Bay, hooked up in a speed duel that carried the three of them through a quarter mile in 22 flat and a half in 45 2/5 seconds.  In the lane, Olde Bay could not keep the pace.

It’s a Bang and Joint Custody — at each other’s throats from the moment the gates opened — continued to slug it out until the late stages, with It’s a Bang prevailing by by 1 1/2 lengths over Joint Custody and another six back to Fran’s Buckaroo in third.

“I knew he would run well today,” Barr said.  “All of us Maryland trainers want to win a race on Maryland Million day or Preakness day.” 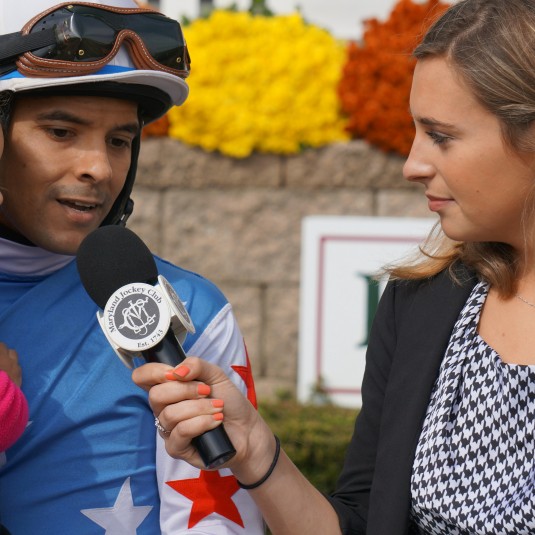 Richard Monterrey holds daughter Daniella while talking with Gabby Gaudet after winning the Maryland Million Nursery aboard It’s a Bang. 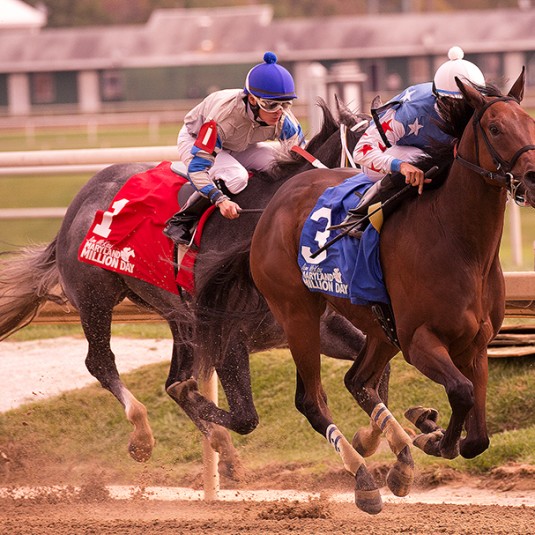