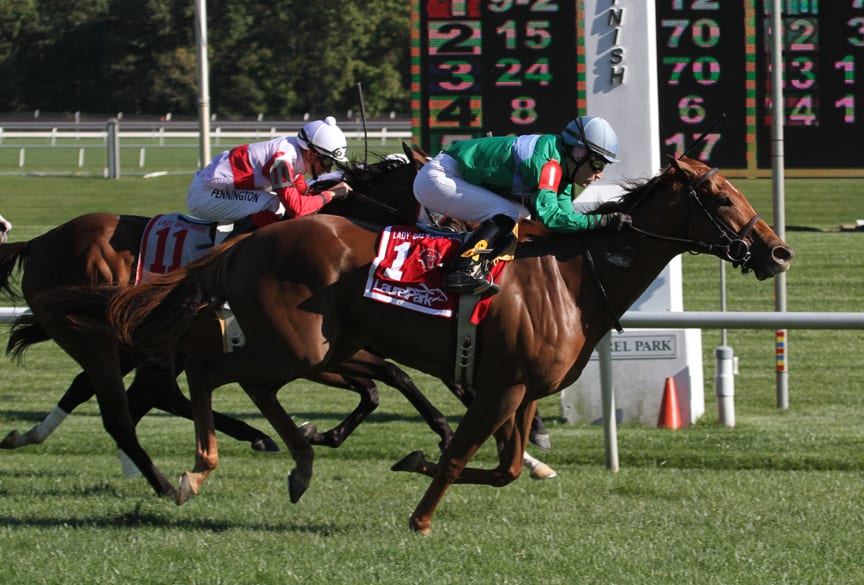 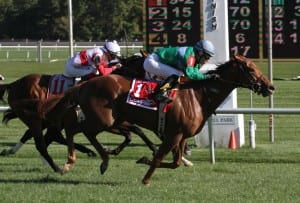 Cornerstone Thoroughbreds LLC’s Medea (IRE) came off the rail approaching the top of the stretch, moved to the middle of the track and was up in time to win the $100,000 Lady Baltimore Stakes for fillies and mares, the third of six stakes races on the Laurel Park turf course.

Forest Boyce guided the daughter of Danehill Dancer to a half-length score in 1:42.47 for the 1-1/16th distance over the firm turf. 70-1 long shot Party Started broke for the lead at the start and managed to hold on to finish second. Scampering was a fast closing third. Medea paid $11.40 and topped a $454.80 exacta and a $3,945 trifecta.

“She broke sharp and I got her tucked in nicely down the backside behind the two which is right where I wanted to be,” said Boyce. “At the top of the lane it all opened up nice and she went on.”

Tres Abbott trains the chestnut mare, who won the Eatontown Stakes (G3) at Monmouth this summer.

“She is a filly that needs fast ground,” Abbott said.  “She has very bad feet. Hard ground stings them. I thought there was a little bit of cushion here today. Forest gave her a great ride. She got herself mid-pack where they were very bunched up. She saved ground and because the straight here is very long she had the opportunity to get her outside for clean run.”