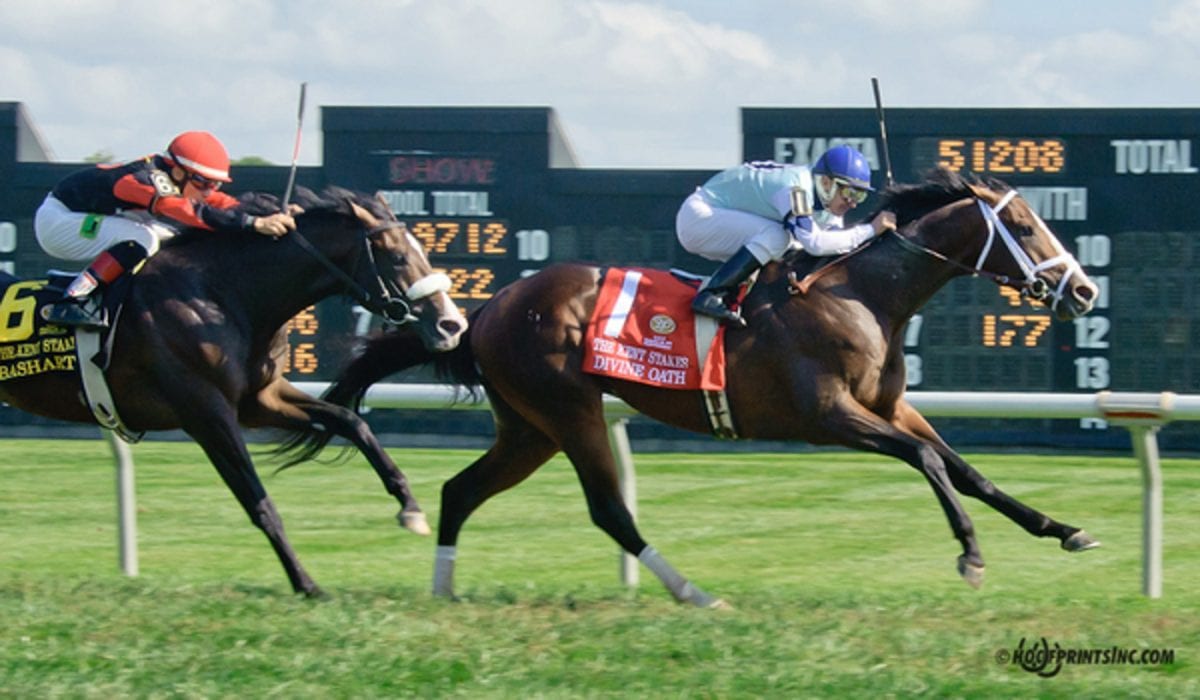 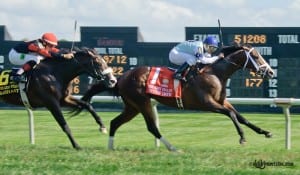 Divine Oath, with Jose Caraballo up, takes the Kent Stakes at Delaware Park. Photo by HoofprintsInc.com.

It’s been 30 years since Jose Caraballo moved to the U.S. from his native Puerto Rico and rode his first winner in this country at Thistledown.

In the ensuing three decades the rider has experienced some ups and downs in his career, but through those years two facts have become quite evident: Jose Caraballo isn’t afraid to work hard, and he knows how to win.

Only once since 2000 has Caraballo failed to finish in the top ten in the jockey standings at Delaware Park. Last season he finished fourth by wins (sixth by earnings), and this year the veteran ranks third behind Alex Cintron and Daniel Centeno who are locked in a tight battle for the top spot in the standings. Caraballo has 35 winners thus far at the meeting and is winning at a gaudy 24 per cent clip.

Last weekend Caraballo captured the Grade 3 $150,000 Kent Stakes for trainer Todd Pletcher aboard Divine Oath, and now, at an age — 48 — when many riders have either retired or are struggling to stay afloat in the highly competitive world of top-flight jockeys, Caraballo is riding, and winning, aboard top quality horses for some of the most successful trainers in the business.

There are any number of reasons a trainer will use a jockey, and having had good luck with a rider in the past is one. When Pletcher raced a division of his stable at Delaware Park several years back, he rode Caraballo regularly. It was that previous partnership that led Pletcher to name Caraballo on Divine Oath for last Saturday’s race.

“We had a lot of success when he had horses here,” the rider pointed out after dinner Thursday night. “We won like 25 or 30 races for him (Pletcher) and he didn’t forget that, which I appreciate. It’s no secret getting a chance to ride a Pletcher horse is what any rider in America wants.”

And Caraballo certainly didn’t look like an older jockey cautiously working his way around the course on Divine Oath in the Kent. He saved ground, moved up along the rail into the stretch, then slipped through along the rail to burst into the lead inside the final furlong. It was a classic case of “cool under fire” race riding.

“Position is everything in most of those turf races,” the rider pointed out. “And inside is the preferred place to be. Sometimes you don’t get through, but it’s still the place to be.”

In 2005 Caraballo got into a dispute in the jock’s room with two riders, one of whom was Ramon Dominguez, and during the course of the argument Caraballo brandished a knife. The incident prompted a 60-day suspension for the rider and now, seven years later, Caraballo still feels badly about his actions.

But there were factors involved leading up to the incident the general public knew little about, most especially the stress that is involved for a rider attempting to keep his weight under control. All riders have to watch their weight, but for some the battle to keep that weight down is a tough one that involves daily stints in the “hot box,” a steam room of sorts where riders spend hours squeezing out pounds in hot-house conditions. It’s not a pleasant experience and often leaves jockeys irritable and short tempered. While Caraballo accepts responsibility for his actions that day when he “just snapped and lost it,” he admits the rigors of “pulling weight” probably contributed to his losing his temper.

“Ramon and I have become good friends and he knows that wasn’t me,” Caraballo said. “It was a bad mistake but I’ve moved on. I’ve also worked on ways to handle my weight that aren’t so tough on my body. It’s a tough thing for a lot of riders; hopefully, someday the scale of weights will be adjusted where jockeys can ride safely without pushing their bodies to conform with the weight restrictions.”

Caraballo ventured to Gulfstream Park for the first time this past winter and won nine races while competing with one of the toughest riding colonies in the country. Right now his plans are to return this winter.

“I’ve got a lot of good people to ride for at Laurel but you know those mornings when it’s 10 above are tough on a guy after 30 years in the saddle,” the rider joked. “Riding at Gulfstream is a lot easier on me physically, and riding for top quality stables can give a rider a chance to get on a really good horse, a horse that can make a career. We (jockeys) all have the same dream, to find the ‘big horse,’ but the chance to get on a horse like that improves when you’re at a place like Gulfstream.”

The rider met trainer Aimee Hall at Suffolk Downs 24 years ago and they’ve been together ever since. He has three children, Jocelyn 24, Josh 22, and Jaimee, 18.

Oddly enough Jose Caraballo became attracted to racing and riding after watching Jose Caraballo ride in his native Puerto Rico. No it’s not a typo or trick; when Caraballo was growing up his favorite rider was named, that’s right, Jose Caraballo.

“He was one of my father’s cousins and was the top rider in Puerto Rico for a number of years,” the rider recalled. “He’s the reason I went into racing — he was my hero growing up.”

Now the riding star of the 21st century named Jose Caraballo closes in on his 2,700 career victories. Meanwhile his biggest fan remains his father. And, yes, his name is… Jose Caraballo.