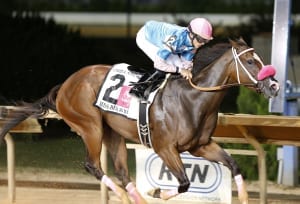 But this time he did all he could not to jinx himself – and the strategy paid off handsomely.

The Pennsylvania-bred bay filly carried jockey Jevian Toledo to an early lead and never looked back, demolishing nine rivals and earning her second career graded stakes victory for a 37-year-old conditioner who’s beginning to solidify credentials of his own.

“I didn’t think she’d win so easy,” Schoenthal said. “It’s just not at all what I expected.”

Circumstances haven’t always been so agreeable.

A little more than six years ago, Schoenthal watched as one of his horses took an early led in a maiden claiming race at Charles Town and widened its advantage around the far turn.

His family was with him at the track that night in April 2008, as his parents had come into town following the birth of his and his wife Sarah’s first child.

As Great Peace, the horse he’d saddled moments earlier, came around the second turn to increase his lead to open lengths, Schoenthal leaned over to his father and uttered: “He can’t lose from here.”

But as Great Peace hit the top of the stretch, the horse bore out and threw jockey Xavier Perez to finish a disqualified last in a field of seven. Schoenthal ate his words and promised himself never to do it again.

Fast forward six years. Sarah is expecting the couple’s third child any day. The trainer and his wife closed this week on a new home in Crownsville, Md., after renting in nearby Crofton, about 10 minutes away.

Things are good for Schoenthal’s racing stable, with roughly 15 horses headed by the standout sophomore filly.

Yet moments after Miss Behaviour’s landslide victory in the Charles Town, Schoenthal acknowledged he nearly succumbed to urges to voice a similar confidence in that horse’s unfolding triumph.

After all, Miss Behaviour had rocketed from the starting gate and built a solid lead down the backstretch, opening things up around the second turn and pulling away for an overwhelming victory in 1 minute, 24.69 seconds for the 7-furlong distance.

“Around the turn she’s widening the margin and I was like, ‘Don’t say it. Don’t say it,’” Schoenthal recalled in the winner’s circle. “I couldn’t believe she won so easily.”

The seven-furlong Charles Town Oaks was the richest race on a program that featured $1 million in purses.

Six-year-old millionaire Pants On Fire picked up the sixth stakes victory of his career in the $100,000 Wild & Wonderful, an open seven-furlong sprint for three-year-olds and upward.

Geeky Gorgeous, a 5-year-old New Jersey-bred mare, delivered as the odds-on favorite in the $100,000 Pink Ribbon, also at seven furlongs and open to females three-years-old and upward.

Schoenthal also said the race was special in another sense, as the young Toledo made the most of an improbable mount in a graded stakes race.

Miss Behaviour, now with $790,000 in earnings, had been ridden of late mostly by riders Sheldon Russell and Javier Castellano, including a victory in the Miss Preakness under Russell in May and a dazzling second-place finish in the Grade 1 Test under Castellano last month at Saratoga.

But when Russell departed Maryland for Chicago earlier this year and was sidelined by injury, the Mid-Atlantic-based Miss Behaviour was without a regular exercise rider.

Castellano would retain the mount aboard the horse for her races in New York. But the high-profile jockey wasn’t there in the mornings to exercise a horse that had developed a reputation as a tough customer come daylight.

“We had a hard time getting works from her earlier this year,” Schoenthal said. “A lot of riders tried. I told Jevian that ‘you’re not going to ride the horse, but can you work her for me?’ He does an excellent job working horses. 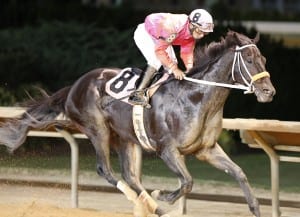 “Frankly he earned the mount,” Schoenthal continued. “He works hard. He’s a nice guy, an ascending rider. He’s the kind of guy that you’d want to help. I was happy to give him the mount today. Try to help his career a little bit.”

A Chicago native, Schoenthal grew up wanting to be a jockey and worked at a horse farms at a young age, according to a 2004 article in The (Baltimore) Sun. He spent four years in the U.S. Air Force and has worked for high-profile industry participants such as trainer Todd Pletcher and owner Michael Gill.

After branching out on his own nearly 12 years, Schoenthal said Saturday he likes where he finds his racing stable at the moment and has certainly enjoyed the ride with Miss Behaviour.

“She’s a machine,” he said. “She’s the easiest horse I’ve ever had to train. At least in my mind, she trains herself.”