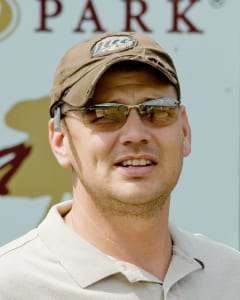 That’s a line from the Clint Eastwood movie Heartbreak Ridge; those are also skills trainers and their owners have to possess these days as the tides of change sweep through the racing industry.

With dwindling handles and reduced funding from outside sources, racing faces an uncertain future in a number of states. Horsemen in many areas are being forced to make some hard choices about their stables, and sometimes those decisions include moving to new states and new circuits.

Two cases in point are John Rigattieri and Jamie Ness.

Rigattieri has been training for 38 years and has been a perennial power at Suffolk Downs for the past 10 years.  Rigattieri runners won over 100 races seven times in eight years from 2004 to 2011, with the bulk of those wins coming at the East Boston, MA, oval.

But Rigattieri has been forced to make adjustments and location changes to his stable to accommodate the winds of change in the business. With the future of racing in New England on uncertain ground, Rigattieri moved a division of his stable to the Mid-Atlantic region in 2010, bringing horses to both Delaware Park and Laurel.

For the past three plus seasons, the veteran has raced the bulk of his runners in Maryland, Delaware and Massachusetts. While he has cut back the number of horses in his stable this year, he still knows how to win and sports a 37 per cent win percentage at Delaware while winning at a 31 per cent clip at Suffolk.

Which doesn’t mean real life doesn’t intrude, and a midweek conversation had to be cut short.  “I’m working on the house right now,” Rigattieri said.

Ness is well known in the industry as one of the main trainers for Midwest Thoroughbreds Inc., the leading owner in the country in races won the last four seasons. He has fashioned a gaudy record — winning at a 29 percent clip since 2007 — while also attracting some scrutiny from racing regulators.  In 2013, for example, officials at Tampa Bay Downs fined him $2,000 and required his horses be under 24-hour pre-race surveillance after one of his runners tested over the allowed threshold for total carbon dioxide (TCO2), according to the Paulick Report.

But even Ness, with a powerful owner like Midwest behind him, is affected by changes in the business. In 2010 he brought a string to Delaware Park and won eight races that season; then he increased his stable at the Stanton oval the next three seasons and won 51, 57 and 50 races respectively. He currently ranks third in the standings at Delaware Park with 21 wins. He also began racing on a regular basis at Laurel in 2011 and has raced in Delaware and Maryland the past three years. Last year Ness purchased a home near Laurel and a number of his better runners will be racing at the upcoming Laurel meeting this fall.

That, he said, is because of changing conditions in the sport.

“It’s always been a good area to race,” Ness observed of the mid-Atlantic region, “and now, with the change in the gaming picture Maryland racing is making a big time comeback. Laurel’s got a very good turf course, the purses are getting better and better, and it just seems like it’s one of the few states where racing is on the upswing.

“It’s tough for a lot of trainers these days,” the horseman reflected.  “The recession has had a big effect on the business. A lot of owners have either cut back on the number of horses they own or have gotten out of the business altogether. Add to that the problem of having to consider leaving an area that you’ve called home, along with having to let some of your people go due to the financial crunch, and you can see it’s a rough period for a lot of outfits.”

Among other things, Ness diversified his client base, taking on some other clients in addition to Midwest.

It’s a tricky time for trainers, trying to cobble together the owners, and horses, to make a living, and a life.

Rigattieri has owners with ties in both New England and the mid-Atlantic area.  While racing divisions 400 miles apart makes for a hectic schedule, it’s all part of what has to be done to stay afloat in today’s ever changing world of Thoroughbred racing.

“You do what you have to do,” he said simply.