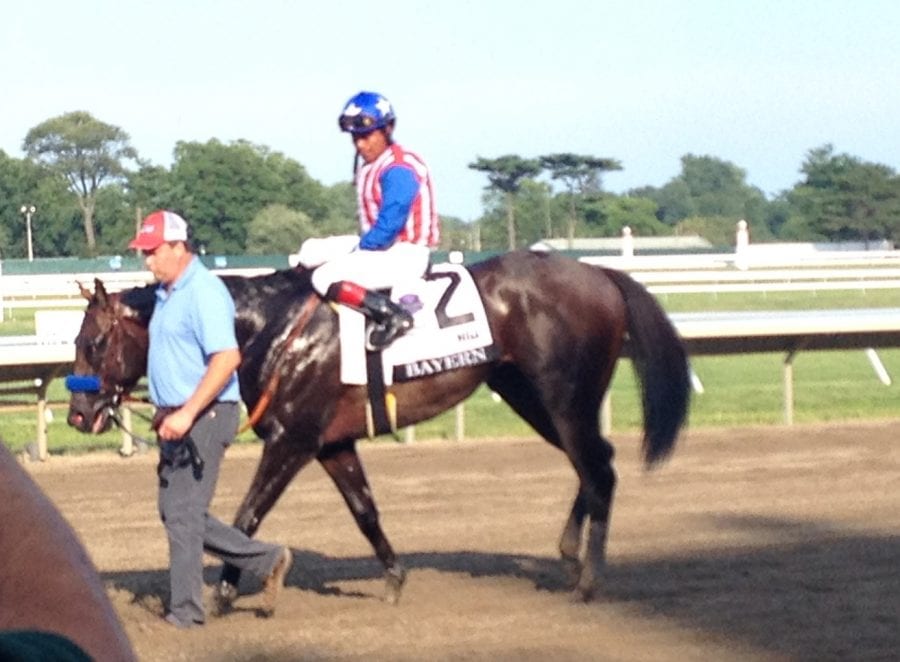 Some musings on racing’s oddities and, well, stupidities… 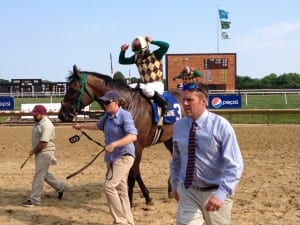 Were these races, say, a month apart — as was the case through 1995, at which point they began to creep towards each other — we might have seen two Grade 1 events with, say, 11 or 12 horse fields filled with the best turfers in the East and Midwest, plus a couple of Euros.

Instead, we saw two short fields that could have been much more compelling.

It’s possible that Churchhill Downs, Inc., which owns Arlington, and NYRA, which operates Saratoga, had some thought in their scheduling beyond trying to screw each other — though both have histories of that — but whatever the thought process, racing fans — and the sport of racing itself — lose.

There are fewer than 10 Grade 1 grass races beyond a mile run outside of southern California.  That two of them occur on consecutive days is… well, ridiculous. 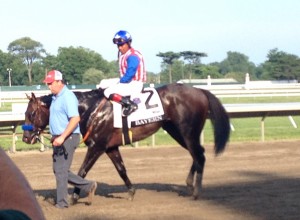 Bayern. Better on the racetrack… Photo by The Racing Biz.

That there are umpteen Twitter accounts that purport to be the voices of horses is a silly little racing oddity.

But, hey, if it gives us — and by us, well, I’m not really sure who “us” is, but you get the picture — pleasure to pretend that it’s, say, California Chrome tweeting rather than, you know, a person with (for one thing) opposable thumbs, then more power to us (whoever it is).

It’s cute, and it’s silly, and flowers and balloons, etc.

And then you come to Bayern’s account, which hastens to assure us that the “Account [is] run by people that work with BB,” that presumably being Bayern’s trainer Bob Baffert.  Apparently, this is so we don’t imagine the horse himself is tweeting.

In this telling, Bayern is somewhere between a crotchety old man and a smack-talking wide receiver.  “Are the jockeys riding in [New York] all idiots?” the not-horse wonders in one Tweet.

In another, he laments that Shared Belief is not racing in the Travers “so I can ruin his perfect record.”

One of the pleasures of racing, many have said over the years, is that the horses don’t speak, so, unlike with human athletes, fans don’t have to confront their all too fallible natures.

Another perfect record down the drain.

OH, AND ONE OTHER THING…

If the goal is uniformity in medication rules — a goal we have endorsed repeatedly — this is one horse racing-esque way of attaining it.

On the one hand we have the Racing Medication and Testing Consortium’s (RMTC) national uniform medication program, including a two-tier drug classification system, accredited labs, multiple medication violations point system, and lasix administration limited to state-designated vets.  That’s the program that Maryland and other states have adopted.

And on the other, we have the Jockey Club, which has announced that it will seek federal legislation to ensure uniformity in medication rules.

If you see an overlap there, you’re not alone.

Advocates of the RMTC approach point out that more than 20 states with over 80 percent of national betting handle are in the process of adopting the program.

The Jockey Club retorts that only a handful of states have adopted all phases of the program.

In fact, both are.  Many states are in the process of adopting the RMTC program, but few have completed the process; these things take time.

Of course, if both sides see uniformity as a key goal, then one would imagine they would work together to achieve it, either through federal legislation or through the RMTC approach.

That they are not suggests that this isn’t really a fight about uniformity at all.  One suspects that power — who gets to make which decisions — is part of it.

And one knows that raceday medication — specifically, furosemide (Lasix) — is another.

Horsemen’s groups have repeatedly favored the administration of raceday Lasix as, they claim, an economical and humane treatment for horses.

Meanwhile, said Jockey Club chairman Ogden Mills Phipps in a release, “We need to eliminate the use of all drugs on race day.”

Federal legislation is a likely non-starter in 2014, and the fact of the matter is that Congress probably won’t want to wade into what it will (rightly) perceive as an intra-industry food fight.

In the meantime?  Getting all the states on board with the RMTC initiative would be a major step forward.