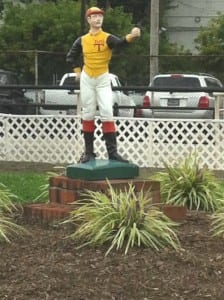 Entries are now up for Friday, August 22, the first day of the Maryland State Fair race meet at Timonium.  Find them here.

The card, which will mark the first live Thoroughbred racing in Maryland since June 7, features nine races with an average of nearly 7.8 horses entered per race.  The card features two first-level allowance events (with a $31,000 purse) and two maiden special weight races ($30,000 purse), one of which is a four furlong sprint for two-year-old fillies.

Last year’s Timonium meet, extended from the recently-traditional seven days to 10, was something of a disappointment overall.  Filling races during the additional three days was a huge challenge.  Starters per race dropped from a bit more than seven to about 6.5, and average daily handle by nearly 15 percent.

Average daily attendance dropped by about a quarter, to 1,783, fueled by sparse crowds checking out the live product during the three midweek days.  That drop matters, because Timonium, unlike most modern tracks, generates much of its handle from on-track players.  On-track comprised more than a quarter of total handle last year, and over 31 percent of total in 2012.

Hugh McMahon led all trainers last year, with nine winners, while rider J.D. Acosta rode 16 horses home to lead the colony.  McMahon will saddle one on Friday, while Acosta has five rides.

Two horses — Mine N Gems and Meant Every Tear — won twice each.