The Racing Biz has been tracking claiming activity in the mid-Atlantic region and reporting on it weekly for the last several months, in our Claimbox report.  We continue that, along with our Midlantic Claiming 7 — the trainers who have been busiest over the prior 30 days, ending in this case on August 5, 2014.


It was a relatively slow week in mid-Atlantic claiming activity.  Meanwhile, the Midlantic Claiming 7 list of the trainers claiming the most horses in the prior 30 days remained largely similar.

Patricia Farro once again led all trainers in the number of horses claimed, their total value, and their average value.  Over the last 30 days, she’s claimed 14 horses with a combined value of $207,000 (average: $14,786).  Scott Lake was second, with 12 claims, and Hugh McMahon’s nine claims posted the second highest average value, with $14,555.

Jorge Navarro, who’s lost nine horses via the claimbox in the last 30 days, led all trainers in having horses claimed away from him.  That was one more than Mike Pino saw claimed away.

Farro and Lake also led all trainers in net gain of horses.  Farro’s 14 claims have been offset by losing six at the claimbox, giving her a net gain of eight horses.  That was one more than Lake’s net gain of seven.

On the flip side, Ronald Dandy had the greatest net loss of horses via the claimbox.  He has not claimed a horse in the last 30 days but has lost six, giving him a net loss of six.  That was one more than the net loss of five registered by Claudio Gonzalez.

It was a relatively sluggish week of claiming activity, the slowest in over a month in terms of the number of horses claimed and the slowest in three months in the dollar value of those claims.

Overall, 50 horses changed hands via the claimbox in the last seven days, down from 57 a week ago.  The dollar value of those claims, just $426,000, was the least in a week since April.  With an average value of $8,520, it was the first time in three months that the region’s claims averaged less than $10,000.

Monmouth Park saw 20 horses claimed during the period — nearly double the amount at any other track — with a total value of $197,000.  Those were both tops in the region.  The average value of 11 claims at Parx Racing, $9,864, led the region’s tracks.  Charles Town was the only other track to reach double figures in claims, with 10.  Penn National saw six claims, and Delaware had three. 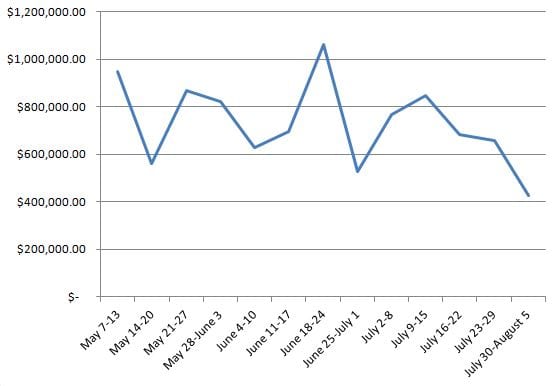