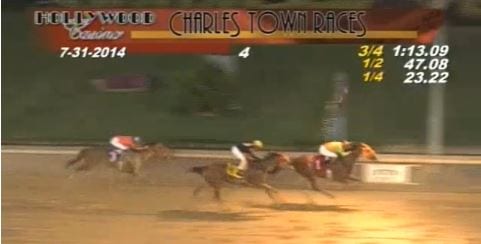 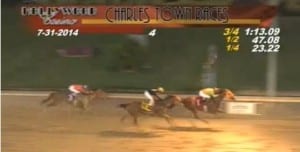 In this screencap, Oscar Flores and Imperial Force hold on to give the rider 1,000 career victories.

But, under an energetic ride from jockey Oscar Flores, Imperial Force had just enough to hold off Channel Changer by 3/4 of a length last night at Charles Town Races — a win that gave Flores 1,000 for his career.

Flores has now won 1,000 times from 7,571 career starts.  He’s also finished second or third more than 1,800 times and has career purse earnings of more than $17 million in a riding career now in its thirteenth year.

Flores had closed to within one of the milestone on Wednesday night when he guided Potomac Crossing to score in a nickel claimer.

Last night, in another nickel event, Imperial Force, trained by Donovan Haughton for his Chuckie Inc., moved quickly to take command in the seven-furlong race.  He led by 3 1/2 lengths after a half-mile and still maintained a 1 1/2 length lead with just an eighth to go.

Channel Changer, bidding outside the winner, made things close but Flores and Imperial Force had enough to hold sway.

Imperial Force has won with four of 18 career starts; two of those wins came with Flores in the irons.