The Racing Biz has been tracking claiming activity in the mid-Atlantic region and reporting on it weekly for the last several months, in our Claimbox report.  We continue that, along with our Midlantic Claiming 7 — the trainers who have been busiest over the prior 30 days, ending in this case on July 22, 2014


Mid-Atlantic claiming activity dipped during the last week, and, while the top of the Midlantic Claiming 7 list remained similar, the bottom changed considerably.

Patricia Farro and Scott Lake remained atop the leaderboard — of the trainers who have claimed the most horses in the region in the last month — but this week they were joined by Hugh McMahon.  All three have claimed nine horses, though the value of Farro’s claims ($150,000) once again gives her the nod as the top of the Claiming 7.  Farro also led the top 7 in the average value of claims; hers were worth an average of $16,667, versus a regionwide average of $11,230.

At the bottom of the list, however, Michael Pino, Jorge Navarro, and Kimberly Graci all dropped out.  They were replaced by Michael Moore, Keith LeBarron, and Tim Kreiser.

McMahon led all trainers in net gain of horses over the last 30 days.  He’s claimed nine, versus losing just one via the claimbox, for a net gain of eight horses.

Jorge Navarro once again led all trainers in having horses claimed away; he’s lost six in the last 30 days, one more than Kreiser and Lake.  Meanwhile, Wayne Potts, Kelly Breen, and David Jacobson led all trainers in net loss of horses.  All three had lost four via the claimbox without registering a claim.

Both the number of claims and their value dropped by around 20 percent during the week ending July 22 versus the prior week.

Monmouth Park led the region’s tracks in the number of claims (18) and their dollar value ($217,000).  The 12 claims made at Parx Racing averaged $12,792, tops in the region.  Delaware Park (13 claims) and Penn National (11) also reached double digits, while seven horses were claimed at Charles Town. 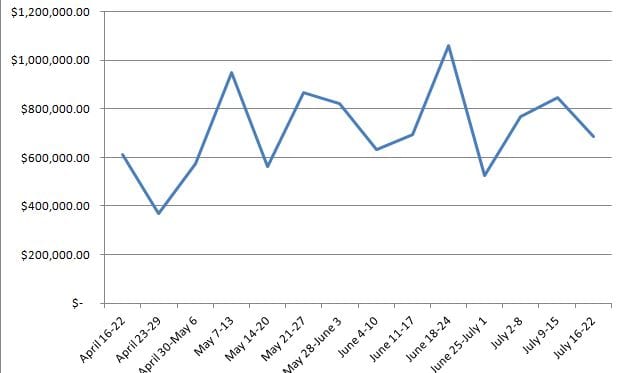