The Racing Biz has been tracking claiming activity in the mid-Atlantic region and reporting on it weekly for the last several months, in our Claimbox report.  We continue that, along with our Midlantic Claiming 7 — the trainers who have been busiest over the prior 30 days, ending in this case on July 15, 2014


Claiming activity was strong for the second consecutive week, with more than 75 horses changing hands.

And Patricia Farro has company atop the Midlantic Claiming 7 list of trainers who have claimed the most horses in the last 30 days.  Farro and Scott Lake have claimed 12 horses each, though the value of Farro’s claims ($211,000) gave her the nod for the top spot; Lake’s claims were worth $183,500.  They were also one-two in average value, with Farro’s $17,583 the region’s highest.

Lake led all trainers by net gain of horses.  He’s lost five via the claimbox giving him a net gain of seven.

Meanwhile, Jorge Navarro led all trainers in having horses claimed away; he’s lost nine in the last 30 days, two more than Farro.  Kelly Breen had the highest net loss of horses during the past 30 days; he had six claimed away without claiming a single horse.

Claiming activity remained strong, with 78 horses claimed in the mid-Atlantic during the week ending July 15.

That marked the second consecutive week, and third time in four weeks, that more than 75 horses changed hands.  It also represented a slight rise over the 76 claimed a week ago.  The total value of horses claimed also rose, to $846,500, a 10 percent jump over a week ago.  That meant a seven percent increase in the average claim price, to $10,853.

Monmouth Park led all tracks by the number, value, and average of claims.  The track saw 23 horses change hands via the claimbox, five more than second-place Penn National.  The value of those claims was a whopping $333,000, with an average price of $14,478.  Parx Racing saw 17 horses claimed, third highest in the region, though the value ($207,000) and average ($12,176) both were second highest.  There were 13 horses claimed at Delaware and seven at Charles Town. 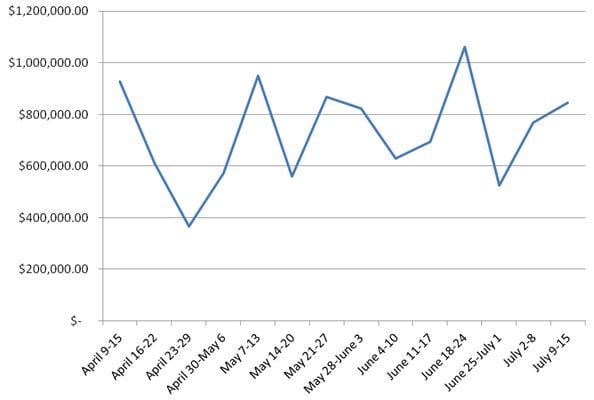