For Spooky Mulder, 34 wins – and one forever home 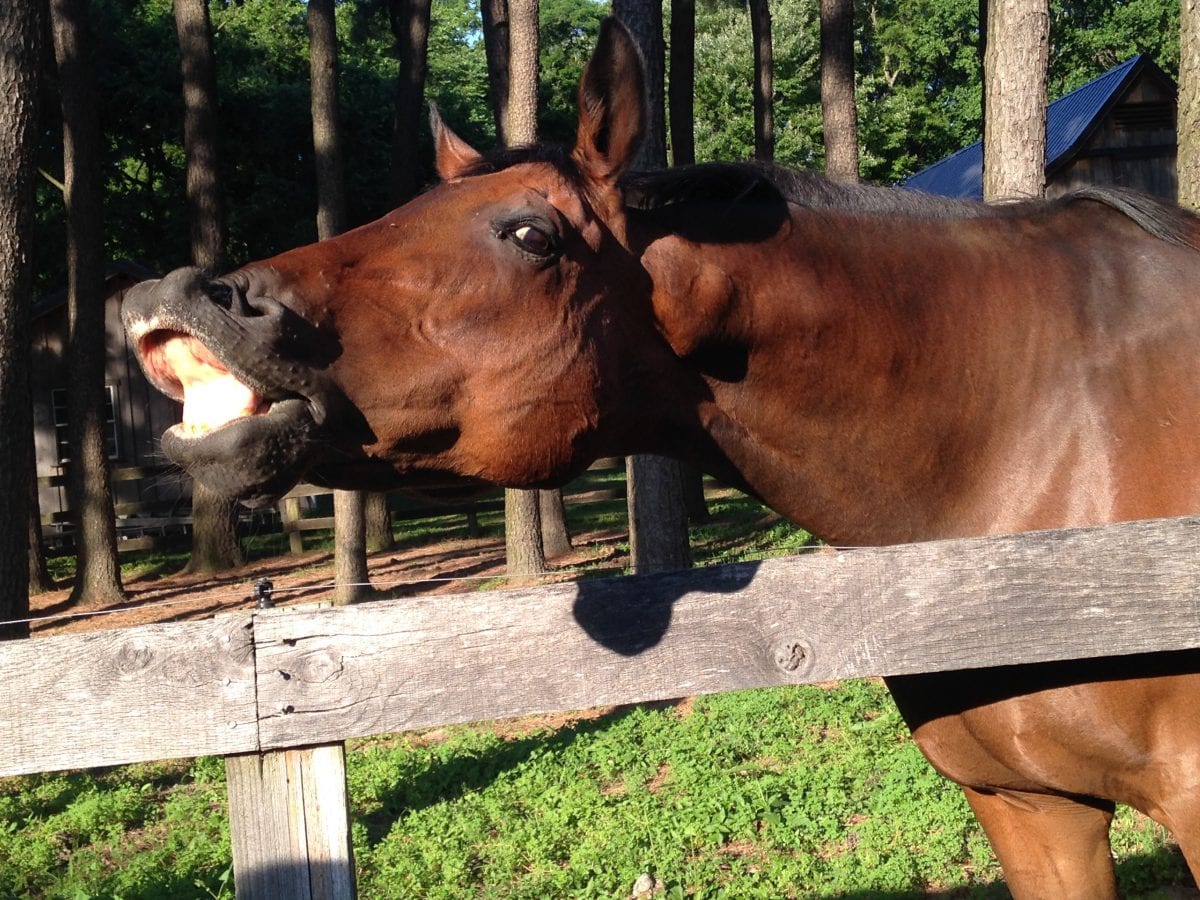 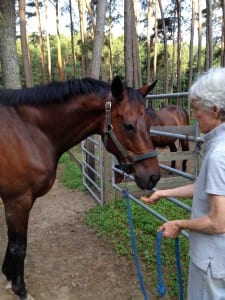 Sally Rohrbach stands by a fence behind her sprawling house in Harwood, Maryland, a short ride from Annapolis.  Glimpses of the South River are visible down the hill from the front yard.

She whistles, looking across several paddocks, over the heads of the three miniature horses that live closest to the barn, a handful of cats lolling in the shade or following her as she walks.

At first, there’s no response, befitting, perhaps, a 16-year-old gelding who won nearly $1 million as a racehorse, doing it, as they say, the hard way, through 85 starts and 34 wins, one in stakes company.  Many of those wins came on mid-Atlantic tracks: Philadelphia Park (back when that was still its name), Delaware Park, the Meadowlands, Monmouth, Laurel, Charles Town. Though he also ventured further afield—Canterbury, Keeneland, Aqueduct, Turfway, Ellis, Keeneland, Belmont, Saratoga, Churchill, Fair Grounds, Hoosier—it seems right that he came home to the Mid-Atlantic. He worked hard and willingly in his eight-year racing career; maybe he’s earned the right to stop taking orders.

But after a second whistle, he ambles forward, his paddock buddy in tow. Five years into retirement, Spooky Mulder may no longer be racing fit, but he still looks grand, still struts like a winner, still carries himself imperiously. He takes his time, until he decides not to, breaking into a canter as if to say, “Yeah, I still got it.”

He ran his last race at Delaware Park in July 2009, for trainer Scott Lake; Lake had claimed Spooky multiple times, and when he recognized that it was time for the then-11-year-old to get off the track, he called his mother-in-law, Felicity Stisted. She took him, but in short order rang up her friend Sally and said, “You have to have this horse.”

Her small farm already full of rescued and retired horses, Rohrbach was dubious. And then she met him.

“Flea was right,” she said, referring to Stisted. “I had to have him.”

He’s now, predictably, the star of the place. He was picky about his paddock mates, rejecting several before accepting—reluctantly?—Older But Smarter, a 25-year-old Maryland-bred who ran third in the 1991 Laurel Futurity (gr. III) and won several stakes on the Mid-Atlantic circuit, earning $300,000 in a five-year career. Smarter cedes authority to Spooky, but not, perhaps, without a dollop of condescension, as if to say, “Sure, if it’s so important to you to be the boss…”

And it clearly is, though every shred of dignity is abandoned when Spooky Mulder hears the rustle of a peppermint. At first he noses emphatically, commanding the treat, but if that doesn’t work, he resorts to buffoonery, pleadingly showing his tattoo, knowing that such antics are irresistible.

He has acres of paddock to call his own and a loving caretaker who keeps on eye on his aches and pains, and a weirdly shaped foot that’s hard to keep shod, though it didn’t keep him from running like a champ, eking out wins even when he looked definitely beaten. Ten of his wins came by less than a length; he was second by the same margin six times. One of his trainers, Pat Reynolds, told the Daily News after a 2006 victory, “If I was stuck out in the desert or riding a horse into battle I’d want Spooky Mulder snorting under me, that’s for sure.” 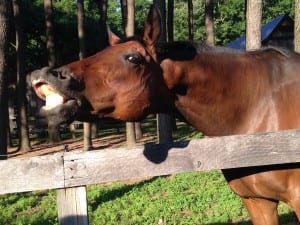 Spooky Mulder sure is partial to peppermints. Photo by Teresa Genaro.

One gets the sense that those competitive impulses could be stirred again in the bay gelding without too much urging, and it’s for sure that he’s never going to let Older But Smarter win a race through the paddock. But the most that Rohrbach asks of Spooky these days is to come when she calls, and it’s a sign of his affection for her that he does…at least most of the time.

Wrote Jerry Bossert, “Spooky Mulder will not be remembered as a Classic winner or a Breeders’ Cup winner but to the fans of New York, there is no one gamer.” Those fans stretch down the Eastern seaboard, fans who watched Spooky on the track and cashed tickets on him, but his biggest fan may be one who never saw him race but who now gets to watch him every day, as gallant and charismatic in retirement as he was on the track, even when he’s begging for a peppermint.

Previous stories on Spooky’s retirement at Brooklyn Backstretch, from October 2010, July 2012 and December 2013 (with race video).