You’re in a space not much bigger than a phone booth, surrounded by steel and standing on a pontoon shelf about a foot wide.

In your right hand you lightly grasp the bridle of a Thoroughbred: 1100 pounds of bottled-up speed and power waiting to explode. Perched atop the horse is a jockey, 100-plus pounds of sinewy muscle, who is counting on you to keep the horse calm and to help save them should their mount suddenly lose control.

On either side, others like you work with their horses. There is shuffling and banging.  “No, no, no!” shouts one of them.  “Not ready, no boss!”

You straighten your horse’s head and point him toward the closed gates in front. There’s a sense of suspended animation for a split second. Then the gates spring open, and your horse and the rest of the field rocket away. You jump down, look around to see if all of your compatriots are healthy, and head off to the starting point for the next race.

Just another race in the life of an assistant starter.

While the assistant starter has a single assignment each race, the starter faces a different set of challenges. He has to watch the field load, shout instructions to the crew on how to deal with problem horses, and then, once the field is loaded he must, in just a few seconds, quickly scan as many 12 horses and decide they are ready to be dispatched.

It’s a split-second decision.  Yet after he squeezes the button to pop the gate, it takes perhaps a half-second for the current to flash to the circuits in the magnet loaded gates to open the stall doors. In that half second a horse can suddenly rear up, flip over, drop its head, or do any number of things that will leave him compromised when the doors do open. A veteran starter once called it “the half-second from hell.”

Bobby Syndor has been a part of many harrowing moments in the 42 years he’s been working the gate, and this season the veteran gate man received a well-deserved promotion when he was named the starter at Delaware Park.

Syndor, who started in 1972 working for Frank Ritz at the “old” Delaware Park, brings a wealth of knowledge and experience to his post this season.  But the change in position has brought with it its own learning curve.

“It’s funny because in all the years I worked as an assistant starter I really never got a full appreciation of what we did,” Syndor explained.  “Being up on the (starter’s) stand, it’s amazing how much more you see, how you can get the rhythm and teamwork the crew brings to the job. I’m learning things every day watching these guys, and that surprised me.”

While each assistant starter is focused solely on his own horse, for Syndor, the trick is to scan the entire field and look for little signs that could mean big trouble.

“When the horse is led in I watch the feet first,” he said.  “If a horse isn’t standing right, if their feet are spread or they don’t look balanced, there’s a problem. The horse feels this and they’re going to shift their weight or move around to get settled, and an off balance horse is going to be a problem.” 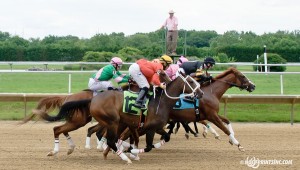 And they’re off! Photo © www.HoofprintsInc.com.

Once their feet are arranged, Syndor shifts his focus.

“My last look is at the heads,” he said.  “I want the heads up and pointed straight down the racetrack when I spring the latch.”

There is danger for the assistant starters around every corner — and not just from the horses.

Take Jim Stein, who served with Syndor on the gate crew at Monmouth Park in the years around 1980.

A rugged larger than life character who liked to say he hailed from “Bugtussle,” West Virginia, Stein was riding on the starting gate one rainy afternoon at Monmouth as the gate was being moved from one starting point to another. As he went to move from his perch atop one of the stalls, his foot slipped and he fell between the stall doors. The rear wheels of the 50,000 lb plus starting gate ran over Stein, crushing him and pushing him deeply into the soggy track surface.

It took several men to pull Stein out of the mud, and it was said that it sounded like a pop from a huge champagne cork when they finally managed to break the suction and free the downed assistant starter.  Remarkably, though he suffered long term residual effects of the injuries he suffered that day, Stein eventually returned to work and continued to work on the gate for a number of years.

That’s what assistant starters do.

Syndor lives in Middletown with his wife Debby and is a grandfather of 11.