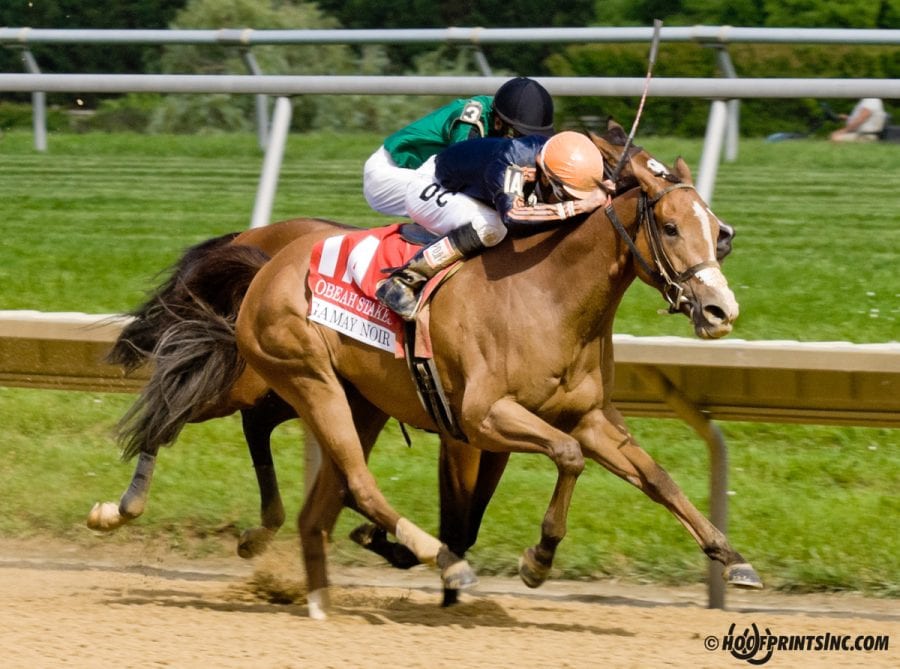 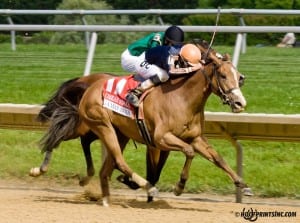 Daniel Centeno has won the riding title at Tampa Bay Downs five times.  But riding is a 12-month-a-year vocation, and the rider has been searching for several years for another track with a spring-summer meet to complement his efforts at Tampa.

If his recent work at Delaware Park is any indication, it looks like Centeno has found his home away from home.  After finishing third in the standings here the last two seasons Centeno got off to a fast start at the current stand and is on a roll right now. Through the first 13 racing dates Centeno has won 19 races to lead the local rider’s standings; Alex Cintron is second, with 17.

Centeno also won the biggest stake of the current stand on Saturday when he guided Gamay Noir to victory in the Grade III $150,000 Obeah Stakes, the final local prep for the $750,000 Grade I Delaware Handicap on July 12.

But his early season success has been no surprise to Centeno.

“I can’t say I’m surprised we’re doing well because we’ve been riding for the right people, and it’s all about the stock,” said the jockey, who needs 14 wins to reach 2,000 for his career.  “Good horses make riders look good.”

The track surfaces at Tampa Bay Downs and Delaware Park are different from a soil make-up standpoint.  But the two ovals are similar in that both are somewhat speed favoring and demand that jockeys make astute decsions early in the race to secure good position.  Centeno excels as he rarely lets his mounts lag too far off the pace and often moves sooner rather than later in races.

He often moves aggressively toward the lead into the turn in sprint races — call it “ the Centeno 3/8 pole power move.”  Sometimes that early challenge costs the rider a race, but more times than not, his move to the front makes his mount the one to catch in the stretch and nobody finishes stronger down the lane than Centeno.

“Tampa and Delaware Park’s main tracks are similar [in that] they both favor horses on the lead or close to the lead,” the rider explained.  “You can’t let horses get away from you early if you can help it. You have to balance it between saving something for the stretch while staying in contention early.

“Of course a lot has to do with what you’ve got under you,” he added.  “You’ve got to have the horse to get those things done.”

So far, so good for Centeno.  He’s had the horses — and he’s gotten things done.

Notes from the First State

Trainer David Jacobson is winning at better than a 24 per cent clip overall this season, but that figure pales in comparison to his record at Delaware Park, where the conditioner has three wins from six starters.

Jacobson put up $100,000 to claim Royal Currier from Joseph Mazza last December and Wednesday the 6-year old Red Bullet gelding returned $30,000 on that investment when he captured the $50,000 Hockessin Stakes.

The win was the 13th from 40 career starts for Royal Currier and the winner’s share ran his career earnings over $800,000…

Another Jacobson runner, Royal Monarcho, set a track record on May 24 at the reinstituted distance of a mile on the main track in his first local outing.  It was also his first race outfitted with large extension and square-shaped blinkers He showed that performance was no fluke when he came back Monday to capture an optional allowance route by more than eight lengths. His time of 1:39.78 was less than three-fifths of a second off the track record for a mile and 70 yards of 1:39.20 set 11 years ago by Distinct Vision.  Another Jacobson runner, Balance of Power, ran second behind Royal Monarcho…

The Hockessin starters also included a bit of a rarity, a Korean-bred Thoroughbred. Major King, who earned over $500,000 winning six races in his native land, flashed a bit of early speed but was through early in the Hockessin to finish last and has now finished last in all three U.S. starts…

Kenyon Furlong’s My Sister Caro had quite an adventure Thursday. The first time starter and half-sister to seven-time winner My Sister Margaret unseated jockey Brian Pedroza behind the gate prior to the start of the 4 1/2 furlong maiden test for two-year-old fillies and ran around for a bit before being collared.  Then she was hung five wide to the turn before being steered to the rail by Pedroza.  But she acted like an old pro in the stretch to slip up the rail and emerge from a four horse photo with a well earned neck win over a late closing Accelebrate.

Accelebrate, making her debut from the Graham Motion barn, was green in the stretch but finished like a good horse and should improve with more distance.

In the colts and geldings division of the 2-year-old sprints, Guderian simply ran off and hid from a field that, from a breeding standpoint, looked as though it might have some quality.  Making his second start, Guderian covered the 4 1/2 furlongs in :53.35 for trainer Tim Tullock, more than a second faster than the filly division, and looked like he had something left in the tank late under Centeno.  It’ll be interesting to see if Tullock moves Guderian to the turf soon. His sire, Stroll, was a Grade I stakes winner on the turf and won 7 of 15 grass outings.