The Racing Biz has been tracking claiming activity in the mid-Atlantic region and reporting on it weekly for the last several months, in our Claimbox report.  We continue that, along with our Midlantic Claiming 7 — the trainers who have been busiest over the prior 30 days, ending in this case on June 17, 2014.


Claiming activity in the mid-Atlantic was fairly stable during the weekend ending June 12, and the Midlantic Claiming 7 list of the trainers who claimed the most horses over the prior 30 days also remained stable.  In fact, the list was comprised of the same seven trainers this week as last, although their order shuffled somewhat.

Patricia Farro remained in the top spot by the number of claims, the value of those claims, and their average value.  She has claimed 14 horses — four more than Jamie Ness in second place.  The total dollar value of her claims — $216, 500 — was nearly double that of any other trainer.  And the average value of those claims was, at more than $15,400, well higher than any other trainer’s on the list.  Ness (10 claims, total value of $113,000, average of $11,300) was second in all three categories.

No trainers entered or left the top seven list this week.

Trainer David Jacobson led all trainers in losing horses via the claimbox; he had 11 claimed away from him, one more than did Farro.  Jamie Ness and Philip Aristone each lost eight.  Jacobson saw the highest net loss over the prior 30 days, with his 11 lost offset by just five claims (net loss of six horses). On the positive side of the ledger, Juan Vazquez and Timothy Kreiser each experienced net gains of six horses.

Claiming activity was essentially flat this week, while the value of horses claimed rose. 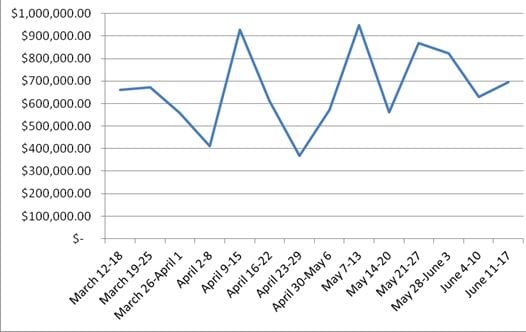