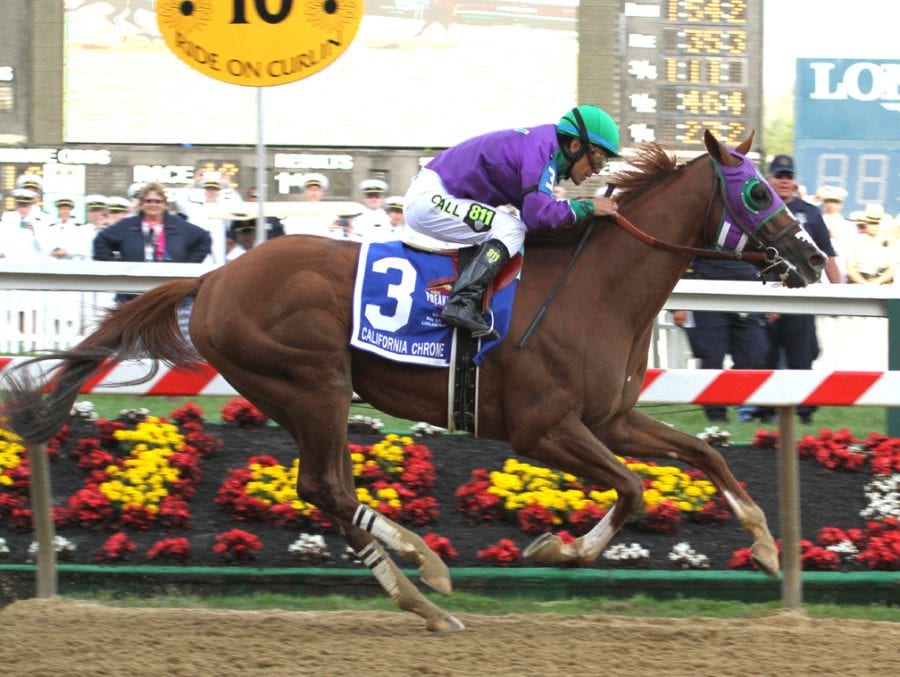 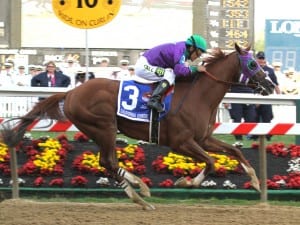 Would California Chrome be more likely to win the Triple Crown with more time between races. Maybe, said our trainers — and maybe not. Photo by Laurie Asseo.

On the one hand are those who agree with Chuckas that such a change would have a couple of benefits.  For one thing, in an era in which horses run less frequently, it would lead to fuller and more accomplished fields in both the Triple Crown races and in the supporting undercard events.  Moreover, it would enable racing  to maintain the public spotlight for a longer time, stretching out its star turn from five weeks to two months.

On the other side are those who point to the tradition of the Triple Crown and its status as a measuring stick of true greatness.

Yet, speak with horsemen and a broader and more nuanced perspective on the proposal begins to emerge.

We spoke with five Maryland-based trainers who have started horses in the Triple Crown, and their opinions ranged from complete endorsement of the Chuckas proposal to outright rejection of it — with stops in between.

Trainer Ferris Allen, who ran Miracle Wood in the 1986 Preakness, issued a full-throated endorsement of the Chuckas proposal.

On the flip side are Linda Gaudet, who with her husband Eddie trained 2011 Preakness runner Concealed Identity, and Bill Boniface, who trained Deputed Testamony — the last Maryland-bred Preakness winner, in 1983 — as well as Parfaitement, who ran in that year’s Kentucky Derby and Preakness, and Oliver’s Twist, who was a close-up second in the 1995 Preakness.

“I’m old-fashioned,” Boniface said.  “I don’t think it should change.”

Falling elsewhere on the spectrum are Hamilton Smith, whose Done Talking ran in the 2012 Kentucky Derby, and Michael Trombetta, who conditioned 2006 Kentucky Derby favorite and Preakness runner-up Sweetnorthernsaint.

Smith suggests a middle-ground approach: stretching the gap from Derby to Preakness to three weeks, while leaving the three-week period between the Preakness and the Belmont intact.  “I think three weeks would make everything a whole lot better,” he said.

And Trombetta, while cautioning that he wasn’t necessarily against the proposal, suggested that it would “be a hard sell.” 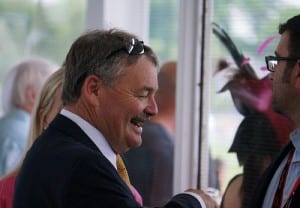 Trainer Ferris Allen calls the proposal to change the timing of the races “long overdue.” Photo by Vas.

Allen, for one, believes that the change would be good for the horses and would bring the Triple Crown in line with changes in the business that have led it, he says, to evolve “in a horse-friendlier way.”

“Our business has given lots of lip service to putting the horse first and doing what’s best for the horse,” he said.  “Most of the horsemen have considered the health of their horses more than the racetracks that are putting on the events have, so most  horsemen are not going to run in all three races back-to-back.”

Others suggest that changes in training stem from factors other than the well-being of the horse.

“You don’t have but a few guys training horses the right way,” Smith said.

To Trombetta, the diminishing number of starts may stem from what he calls “a whole generation of horsemen who train their horses very lightly.”

Boniface thinks that the change has less to do with the breed or even training regimens — and more to do with simple math.

“I think it’s the trainers who are not as durable,” he said, laughing.  “They are all so worried about their win percentage, and they just wait until they’re in the perfect, perfect, perfect spot, and that’s why horses make fewer starts.”

Stretching out the time, then, might make trainers more inclined to run their horses back in each of the events.  But it’s not as simple as all that, Trombetta pointed out.

“Some horses it will be better for,” he noted.  “Some it won’t.  Who’s to say: you might have to train him a little different way, and something might happen because of that.”

And Linda Gaudet pointed out that other factors are likely to come in play, including horses’ performance in the Kentucky Derby.  “Those horses that don’t perform well in the Derby — even given 30 days, they’re not going to come back for the Preakness,” she said.  “They’re done for months at a time.”

What’ more, she suggested, the perception of Pimlico as a speed-favoring racetrack, though rooted more in tradition than in current reality, may influence trainers’ decisions.  “They think you have to have speed [and] you can’t come from off the pace in the Preakness,” she explained.  “Maybe some of those horses that came from way far back and closed, they think maybe we’ll wait and take our shot in the Belmont.”

As to the argument about tradition, it’s perhaps no surprise that this group had differing perspectives. 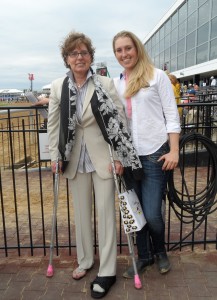 Smith, who favors three weeks from race to race, believes that horses need the additional week such a schedule would afford — but no more than that.

“If you go a month,” he said, “that would take away from the tradition.  You can’t extend it too much from what it is now.”

For Trombetta, navigating these waters poses challenges.  “Is the burden of running in all three races tremendous?  Absolutely,” he pointed out.  “But some people would argue that’s what makes them great.”

But to Allen, worrying about tradition is asking the wrong question.  “If the goal is to have the best three year-olds in all three races,” he claimed, “the right thing to do is spread them farther apart.”

Some have argued — perhaps foolishly, given the fluidity of the scheduling of the three races over the years — that a revised schedule would necessitate putting asterisks next to future winners, that the Triple Crown would be cheapened.

But Boniface pointed out that critics constantly carp at the quality of the new generation of horses.  “They say it every year: This is a bad group of three year-olds,” he said.

And Allen thinks that stretching out the sequence might actually make winning the elusive Crown even more difficult.  “It may make the Triple Crown tougher to win because you’d have all the top horses in all three races,” he observed.

That the group would have different perspectives should come as no surprise, given their different Triple Crown experiences.

Yet, to some extent those differences reflect the different eras in which they were running more than anything else.  Both Smith’s Done Talking (2012) and Trombetta’s Sweetnorthernsaint (2006), for example, had made seven career starts before running in a Triple Crown event; Gaudet’s Concealed Identity had made eight.

Both men felt that the demands of getting to the big races — both horses had secured their spots in Kentucky with wins in the Illinois Derby — left them with tired horses after their Triple Crown races.  And each horse made just two post-Triple Crown starts during the remainder  of their three year-old seasons.  Gaudet’s horse made his next start the week after the Belmont, in the Grade 3 Pegasus.

On the other hand, Allen’s Miracle Wood’s Preakness start (1986) — he finished fifth — was the 20th of his career.  And Deputed Testamony’s 1983 Preakness triumph for Boniface was that horse’s 12th career start.

Each made at least a half-dozen other starts during following the Preakness.  Deputed Testamony ran sixth in the Belmont in his next outing; Miracle Wood ran seventh in the Grade 2 Jersey Derby just nine days after the Preakness.

What Chuckas is attempting to do is no small matter.  Just three Derby runners, including winner California Chrome, faced the starter in Baltimore.  While that’s an unusually low number — in most recent years, five or six did so — and perhaps driven in part by California Chrome’s perceived superiority, there’s no question that a Preakness with, say, the top three or four Derby finishers presents a more attractive race than does one with the winner and a couple of also-rans.  (To say nothing of some of the recent Belmont fields; at least three recent Belmont winners never won again.) 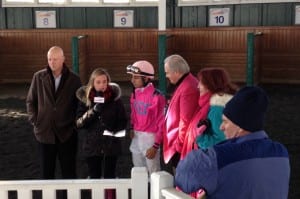 It’s been 46 years since the last change in the Triple Crown schedule, and while that’s hardly a lifetime, it’s long enough that many believe it to be sacred writ that the series take place over five weeks.

And there are risks in changing it.  Perhaps Chuckas is wrong, and rather than extending the public’s interest in racing, the longer schedule would cause it to dissipate, as Smith suggested.

And if Allen is right, and the Crown becomes even more elusive, that might undermine the other benefits Chuckas envisions.  There’s no question that racing gets a bump each time a horse heads to New York with two jewels of the Crown in his pocket; were that to happen less frequently, that could be a net negative for the industry.

“This particular thing is our Super Bowl,” Trombetta observed.  “To change it is tricky.”