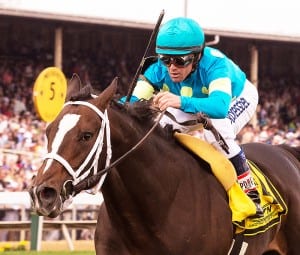 It’s our third Turf Ten of 2014 — Nick’s picks for the top ten three year old horses with at least one North American start on the turf in 2014.

In previous years, the roster of the leading three year-old turf runners and the list of probables for the Virginia Derby have been one and the same. However, with the summer meet at Colonial Downs, along with its Virginia Derby, hanging by a thread, and with the introduction of the $1.25 million Belmont Derby in New York this July, the arena for the top turf three year old performers changes, providing more options for a division whose universe was once anchored in central Virginia.

Since the last turf ten, Global View won the $250,000 American Turf (G2) at Churchill Downs, Wallyanna captured the $100,000 James Murphy at Pimlico and the filly Istanford won the $150,000 Arlington Classic (G3).  Coming up quickly are the $500,000 Penn Mile this Saturday and the aforementioned Belmont Derby over Independence Day weekend.