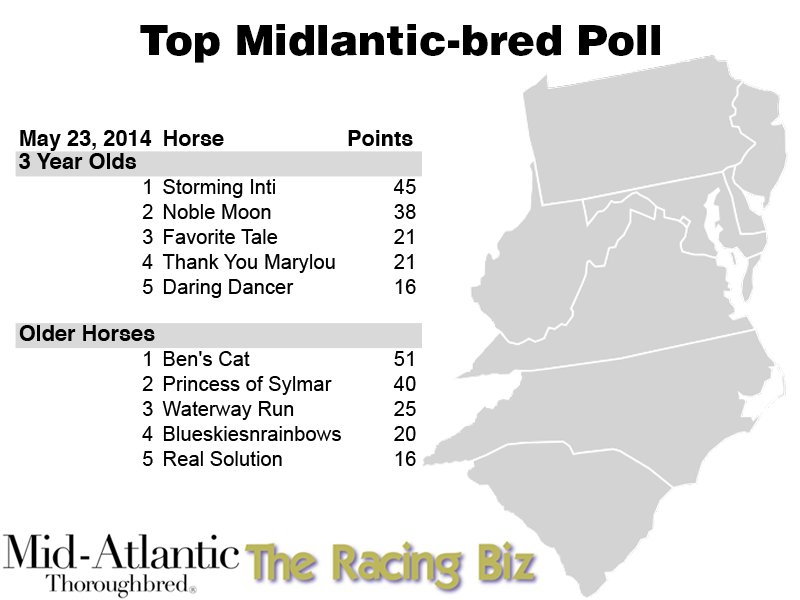 With his second win of the season, Maryland-bred old-timer Ben’s Cat ascended to the top of the older horse division in the latest Mid-Atlantic Thoroughbred/The Racing Biz Top Midlantic-Bred Poll, announced today.  He took over the lead from Princess of Sylmar, who has made just one start so far this season.

Among the sophomore set, Pennsylvania-bred Storming Inti remained atop the list, ahead of Noble Moon.

Ben’s Cat posted a comfortable win in the Jim McKay Turf Sprint last Friday at Pimlico, in a race that was taken off the turf.  It was the 26th win of his marvelous career and pushed him within one win of $2 million in career earnings.

He is an eight year-old gelded son of Parker’s Storm Cat out of the stakes-placed Thirty Eight Paces mare Twofox.  Ben’s Cat was bred by King Leatherbury, who also trains him and, as The Jim Stable, owns him.  Leatherbury also trained by Thirty Eight Paces and Twofox.  Ben’s Cat’s two wins from two tries this year have both come at odds-on, but the water will likely get deeper as the season goes on; his next scheduled start is in the Pennsylvania Governors Cup at Penn National, where he was third last year after a disastrous trip.

Princess of Sylmar, whose only start in 2014 was a win in  the Cat Cay at Aqueduct, slipped to second on the list of older horses.  She is expected to make her next start in the Grade 1 Ogden Phipps on Belmont day.

The only newcomer to the older horse list, in fifth place, was Pennsylvania-bred Real Solution.  The son of Kitten’s Joy-Reachfortheheavens, by Pulpit ran second in the Grade 1 Man o’ War on May 11, his second start of the season; he previously had run fourth in the Grade 2 Mervin H. Muniz, Jr. Handicap.  Bred and owned by Ken and Sarah Ramsey, he most notably won last year’s Grade 1 Arlington Million via disqualification.

Among three year-olds, the list looked largely similar to the prior edition, with Storming Inti, most recently second in the Grade 2 American Turf, and Grade 2 Jerome winner Noble Moon holding the top two spots.  The list’s only big mover among the sophomores was Pennsylvania-bred Favorite Tale.  The son of Tale of the Cat, out of the graded stakes-placed Grindstone mare Tricky Elaine, moved into third position with a win in the Gold Fever Stakes at Belmont.  That gave the Parx-based runner, bred by Paul Conway and owned by PJG Stable, four wins in five starts in 2014.

The twin lists contained five Pennsylvania-breds, three Virginia-breds, and two Maryland-breds.  Six of the top 10 were males, while four were females.  Three horses — Storming Inti, Daring Dancer, and Princess of Sylmar — received at least one vote for each position first through fifth.

This marked the fifth semi-monthly edition of the poll.