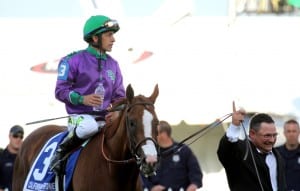 “The moon and the stars and the universe had to be lined out just right for this to happen,” Steve Coburn, California Chrome’s co-owner, said in the days before last weekend’s Preakness Stakes.

Which, of course, is true.  One is tempted to add “especially for the offspring of an $8,000 Not for Love mare named Love the Chase and a $2,000 stud named Lucky Pulpit,” but, honestly, that would be gilding the lily.  The moon, the stars, and the universe must be aligned for any breeding — rich, or otherwise — to produce the Kentucky Derby winner.  After all, there are 25,000 Thoroughbred foals each year, and only one will win the Derby.

And to produce a dual-classic winner, as California Chrome now is?  Well, those are rarer still.

From here, we should segue into a discussion of Chrome’s breeding in which, if we squint in just the right fashion, we’ll divine the genetic genius that begat the best sophomore in the land.

“We bred this mare [Love the Chase] to Lucky Pulpit because she didn’t take to Reddatore, and they sent Reddatore out of the country,” Coburn explained.  “They sent him back down to Brazil, and they didn’t bring him back. So she nicked a B+ with Lucky Pulpit, so we bred her to Lucky Pulpit.”

He added, “If you go back generations and bloodlines, Lucky Pulpit’s got some great bloodlines and so does Love the Chase.”

Ahh, yes, great bloodlines.  That’s what we were looking for.

“I intentionally set out to breed the [dam of the] Derby winner,” Dr. Tom Bowman, breeder of Love the Chase, joked.  “And I called them and told them that if they bred her to Lucky Pulpit, it was a done deal.”

Bowman and partner Milton Higgins bought the apparently barren Sir Ivor mare Chase the Dream and were able to get four consecutive foals from her.  One of those was Chase It Down, by Polish Numbers, who, after a one-win career, was bred to Not for Love, producing Love the Chase.  And, in turn, after Love the Chase’s one-win career, she was bred to Lucky Pulpit, and the result — well, the first result — of that has now won two legs of the Triple Crown.

“I refuse to get caught up in this whole bizarre thing about how smart we are with their pedigrees,” he added.  “It’s all so overhyped.”

Certainly, Bowman is asked, you realized that…

“I call it retrospective genius,” he retorted.  “You look at the pedigree and you pick out certain parts” to prove that success was virtually inevitable.

But that’s not really how it works.

“Honestly, what we do is try and narrow down the chances of failure,” he said, “by ruling out obvious incompatibilities — style of racing and conformation and bloodlines.  But it’s more to chance and more to circumstance.”

Yes, he allows, they were aware when they bred Love the Chase that they were doubling up on Buckpasser in the pedigree, through the great Numbered Account.  But, no, no credit for that, either.

“Not for Love was the most available stallion,” he said.  “If Not for Love hadn’t been [in Maryland], would we have bred to him in Kentucky?  No, we would have sent her to Two Punch.”

In other words, the “most available stallion” produced a mare who, when bred to her owners’ second-choice stud, gave birth to the winner of both the Kentucky Derby and the Preakness.  Just the way everyone drew it up.

“We got the right genes, the right mixture, and come up with a runner,” Art Sherman, California Chrome’s trainer, suggested.  “You don’t know why — things happen, you know what I mean? You just gotta go for it. He’s one of them freaky good horses that come around once in a while.”

He is that, and with his rags-to-riches story he’s become something of a people’s horse.

And, Coburn is hoping, not the last of his line. 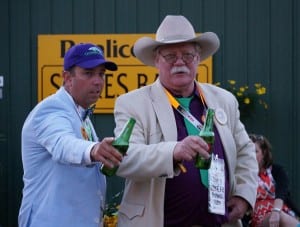 “He’s got two full sisters on the ground right now,” the owner said.  “One’s a yearling and one’s a suckling, and they’re just as good looking as Chrome is.

“They’re all three chestnuts, which is a cool color,” he added, doffing his Stetson hat to reveal a shock of mostly white, formerly red, hair.  “I used to be a chestnut at one time, and now I’m more chrome.”

In just more than two weeks, California Chrome will — if all goes according to plan — enter the Belmont Stakes starting gate, with history beckoning from a mile-and-a-half away.  Bowman will be rooting for him.

“It’s a great story, but it’s all about a couple of guys in California,” he said.  “It won’t make us feel any different about how smart we are.”

The same is true for Coburn.