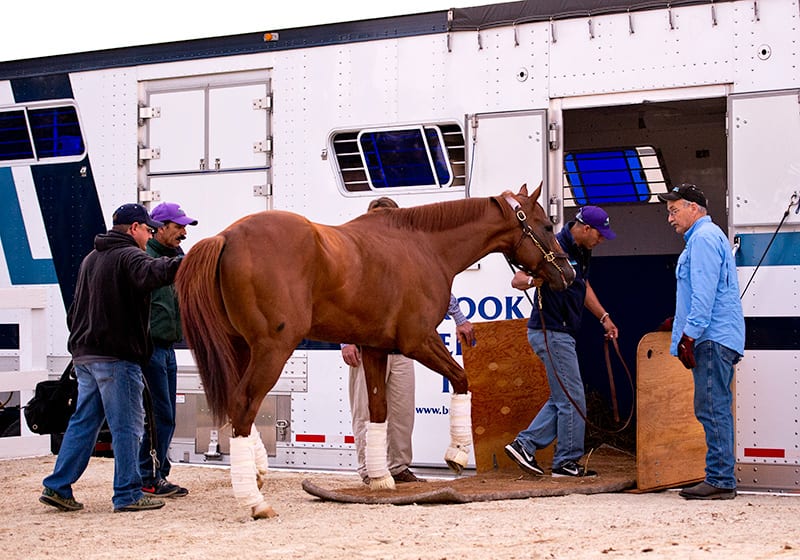 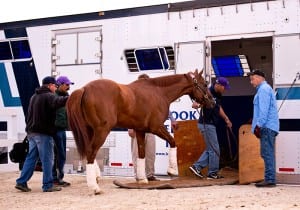 “He looks great,” assistant trainer Alan Sherman said 45 minutes before the California Chrome boarded the Brook Ledge van. “I just went in there checking on him and he was biting me and pushing me around. He licked the bottom of his feed tub clean, so he’s ready to go.”

California Chrome followed up his May 3 Kentucky Derby (G1) victory with a 1 ½ length score in the Preakness Stakes (G1) Saturday afternoon.

“It is just an amazing experience,” added Sherman. “Every time I watch the Preakness replay I darn near cry. It has been a great experience. None of these horses have run a mile and a half so it is an unknown for everybody. This horse has a high cruising speed and I think he’ll be fine but the track at Belmont is completely different than it is here at Pimlico or Churchill. I know one thing, he will try hard.”

California Chrome was led out of the Preakness stakes barn by exercise rider Willie Delgado. After posing for pictures, he boarded without incident at 6:04 a.m.

“I think he enjoyed the couple days of relaxation,” Sherman said. “I probably don’t realize how big of a zoo it is going to be up there in New York. I have never gone through anything like this.”

Preakness runner-up Ride On Curlin accompanied California Chrome on the trip leaving Social Inclusion as the only remaining Preakness runner left on the grounds. He is expected to depart for New York Sunday.