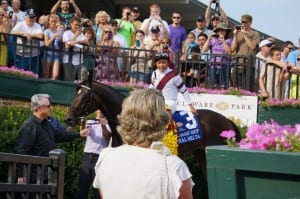 The Delaware meet is highlighted, as always, by the July 12 Grade 1 Delaware Handicap, won last year by Royal Delta. Photo by Vas.

When Delaware Park opens its gates for live racing this Saturday, it will mark 20 years since the Horse Racing Redevelopment Act formed the marriage between gaming and horse racing that brought live Thoroughbred racing back to the state. To say the union has been an interesting one would be an understatement.

Delaware Park is no longer Delaware Park, it’s the Casino at Delaware Park, and from the very beginning it was obvious that gaming was responsible for bringing Thoroughbred racing back to the state and it would be gaming that would, for the most part, provide the finances to maintain live racing in the state.

In the early years, as fans flocked to the track to play the “one armed bandits,” the money rolled in, purses for racing rose at a rapid rate and life was good. But as neighboring states like Pennsylvania and Maryland legalized gambling, gaming profits declined and the racing picture changed.

In recent years the track where such greats as Barbaro and Hard Spun began their careers saw stables that had been racing at Delaware Park leave or markedly reduce their numbers. Field sizes dwindled and the overall quality of racing at the track declined.

The mutuel handle has also dropped, especially on-track and in recent years on-track handles in the neighborhood of $50,000 have become commonplace. While the track has been aggressively working to keep their casino fans, adding poker, table games and parlay card football sports betting, racing has continued to struggle.

So now, as Delaware begins its 81-day meeting that runs through October 22, what does the future hold for racing at this track that has been running Thoroughbreds for over 70 years?

Trainer Mike Gorham, a long time fan favorite at Delaware and a top flight horseman, has been training for some 29 years. Last season he was elected president of the Delaware Thoroughbred Horseman’s Association.

With his election and the addition to the board of trainers like Jamie Ness and Anthony Pecoraro, the DTHA leadership now includes more full-time year round horsemen, and Gorham was candid in his assessment of the racing picture and what the fans can expect.

“There’s no question we’re (Delaware Park) in a tough spot when it comes to attracting horses. Maryland’s recent resurgence due to gaming money in that state has hurt us, and we lost a number of outfits several years ago when Pennsylvania legalized gambling. It’s the nature of the business these days, unfortunately; gaming is expanding everywhere.”

Gorham feels the appointment of Jed Doro to the racing secretary’s position was a positive move and is encouraged by his dealings with Doro, who served as assistant to Pat Pope here for several seasons prior to his promotion.

“We’ve had some good discussions and I think Jed will bring some new things to the table this season,” Gorham said, “He has a good following from Maryland and I think that will be important this summer after the close of Pimlico when Maryland based outfits will be looking to other tracks to run during the summer months.”

Gorham agrees that field size, more specifically small fields, turn the serious bettor off.  But he hopes when turf racing begins later this month the overall size of the fields at Delaware will increase and the betting product will be more attractive, “I understand how the bettor feels — I’m a bettor myself.  But as I said, as the meet goes on I think players will find more opportunities to get value for their betting dollar.”

Gorham also feels racing needs to do everything it can to attract younger people and feels it’s never too early to get a youngster to the track. Along those lines the DTHA is sponsoring three Family Days at Delaware Park May 31, July 19 and August 16. There will be pony rides, games and amusements and chances for the family to enjoy a day at the races. “We need to do all we can to get new blood to the track, to treat them well when they come, and do what we can to make them want to come back again.”

From management’s side, Jed Doro was also realistic in his appraisal of what type of racing product the fan can expect this season.

“I won’t kid you, we’re in a pitched battle for horses as is every track in this area,” Delaware’s new racing secretary admitted.  “Unlike the old days when we could count on ship-ins for as much as 20 per cent of our entrants on a given program, now we’re almost entirely counting on the horses we have on the grounds. Right now we have around 750 stabled here with some more coming in, but for a while it’s going to be tough and the some of the fields won’t be as big as we would like them to be.”

Doro said the fate of Colonial Downs will also play a part in just how many horses Delaware will be able to attract on a given day.  “If Colonial doesn’t open, and right now it looks doubtful that they will, then when Pimlico closes in early June we should get a number of horses that would normally race at Colonial,” he pointed out.

“That would certainly help our field sizes and the overall quality of the product. We begin turf racing on May 28, and I know grass racing is very popular with the bettors. We’ve got some new outfits like William Van Meter, who was an assistant for D. Wayne Lukas before going out on his own, and Aldano Gonzalez, who took over a string for Bruno Schickedanz after working for Joan Scott. Several of our leaders from previous years like Jamie Ness and Juan Vazquez and Tim Ritchey are also back. We’ve made some changes so that conditions for races are easier to understand so hopefully trainers will be able to point for races and have them fill.  As I said, we hope once we go to four days a week and turf racing starts we’ll be able to give the fans attractive programs they will want to wager on.”