Ageless shoots up the rail to win The Very One Stakes 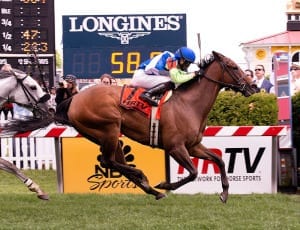 “I wasn’t sure the rail would open,” said rider Luis Garcia in the aftermath of Saturday’s The Very One Stakes at Pimlico.  “I was behind the 6 (Quality Lass). Finally she left the rail a little bit and my filly slipped through. I loved it. We went for it the last eighth of mile.”

His mount, Lael Stables’ Ageless, had to wait behind horses until room opened along the fence in the stretch, then dashed through an opening to win the $100,000 The Very One Stakes Saturday at Pimlico.

The Very One Stakes attracted 10 fillies and mares and was contested at five furlongs over the ‘good’ turf. The winner, under Luis Garcia, was the 2-1 favorite.

The Arnaud Delacour-trained daughter of Successful Appeal covered the distance in 58.91 to win by three-quarters of a length. Longshot Perfect Measure was second and Quality Lass finished third.

“She saved ground and came with a big kick at the end,” said Delacour.

Ageless, who won the Giant’s Causeway Stakes at Keeneland in his previous start, paid $6.60.