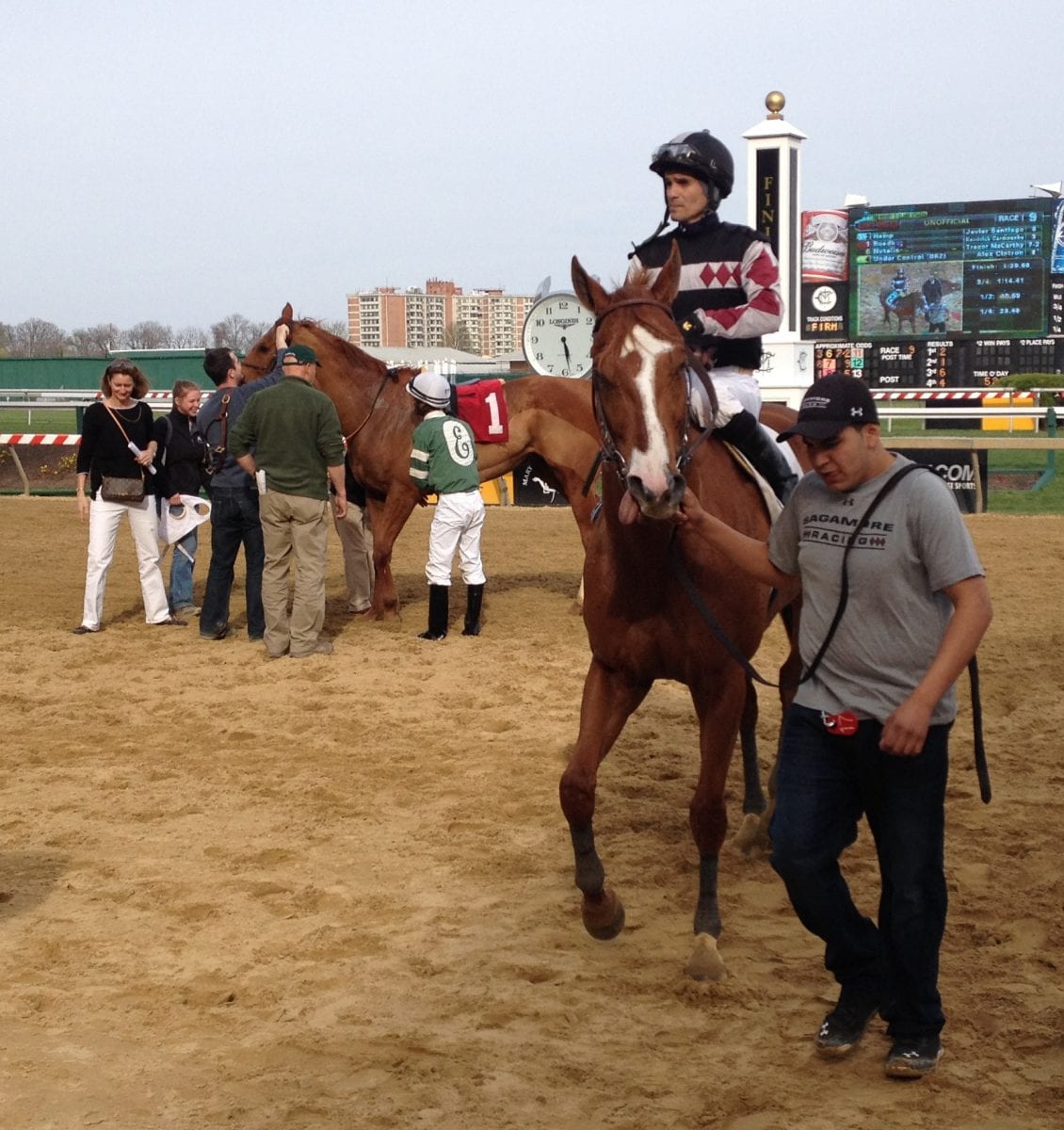 The rains rolling through the mid-Atlantic region Friday are playing havoc with the best-laid plans of racing secretaries, shifting races from turf to dirt and leading handicappers to seek horses whose “mother was a mudder,” as Seinfeld said.

They were of less concern, however, for Tom Mullikin and the other Sagamore Farm connections of their homebred Hamp, slated to run in Saturday’s Grade 2 Dixie at Pimlico on the lawn.  Hamp, fittingly, is made of sterner stuff.

The four year-old Sky Mesa gelding will make his graded stakes debut following a win in the Henry S. Clark Stakes on the Pimlico turf on April 19.

“They had it listed as ‘firm’ on the day of the Clark,” Mullikin said. “But that’s kind of a moving scale. I know there was a lot of give in the ground then.”

And given Hamp’s competition on Saturday, softer ground might actually work in Sagamore’s favor. 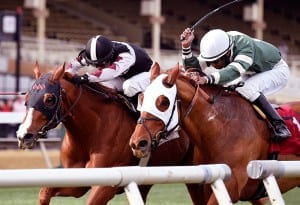 Hamp, on the outside, pips Roadhog to win the Henry S. Clark Stakes at Pimlico. Photo by Jim McCue, Maryland Jockey Club.

“He needs to run one of his best efforts to be there,” said Mullikin pragmatically. “But a lot of these horses are coming up from Keeneland or Gulfstream, where they’ve been on consistently firm ground.”

Hamp may be a gelding, but it’s safe to say that a win here would mean more to Sagamore than just the fattening of the horse’s bank account.  Though he acknowledged that other horses in the race have run better figures than Hamp, Mullikin pointed to a quality not found in past performances that the horse possesses in abundance.

“A lot of heart,” he said. “He’s a competitive horse, and he’s never run a race where he didn’t try.”

One need look only to the Clark to see that intangible on display.  Racing comfortably at the back of the pack, Hamp went six-wide into the stretch and dueled with Pennsylvania-bred Roadhog before prevailing by a head.

“That race was exhilarating,” said Mullikin. “It’s a lot of fun when they’re homebreds. Even if they don’t capture the prize, they try hard. And Hamp is already special to us; he doesn’t owe us anything.”

The four-year-old chestnut is named for Sagamore owner Kevin Plank’s friend Bill Hampton, who died suddenly in 2011 while working for Plank’s Under Armour.  At the time, Plank called Hampton “one of the most beloved people on our brand.”

He carries the legacy of his namesake, along with that of his dam Vienna Affair.

Winless in four starts in Great Britain, Vienna Affair was purchased by Sagamore for $380,000 at the Keeneland November sale in 2009.

“Her family is really stout,” said Mullikin. “She’s by Red Ransom out of a Woodman mare; her third dam is Terlingua. It’s a great family, and she was one of the more expensive purchases for us.”

Hamp, a stakes winner of more than $150,000, was Vienna Affair’s first foal.  Her second, a three year-old Empire Maker filly named Daring Dancer, is undefeated in three starts including a win in the Grade 3 Appalachian a Keeneland.  That triumph came just two days prior to Hamp’s win the Clark.

Daring Dancer had been slated to run in Friday’s Hilltop Stakes at Pimlico, but Sagamore chose instead to scratch as a result of the weather.

Vienna Affair also produced for Sagamore a 2-year-old Malibu Moon filly, a yearling Empire Maker filly, and a 2014 Kitten’s Joy filly, which, given the success of her first two progeny, carry the hopes of years of successful racing in the Sagamore colors.

They also carry a bittersweetness, as Vienna Affair was euthanized early this spring after suffering a colon torsion.

“She foaled a really nice Kitten’s Joy filly in early February,” recounted Mullikin. “A couple of days later, she suffered a colon torsion and had surgery. She was putting up a good battle, but it got to the point that in order to treat her humanely, we had to make the tough decision to euthanize her.”

“She was our best mare, and situations like this are always going to be a heartbreaker,” he went on. “And then she gave us this Grade 3-winning filly, which just adds emotion.”

Mullikin emphasized the mare’s fight to recover, perhaps the same fight that Hamp and Daring Dancer display on the racecourse. Her offspring have earned a little more than $250,000 on the track, and much, much more than that in the hearts of the people who took care of her and her foals at their home on the farm in Glyndon, Maryland, a short distance from Pimlico.

“We couldn’t believe she died,” said Mullikin, his voice full of emotion, “and then Daring Dancer pulls off a graded stakes win.

“It was kind of like a round of golf: you bogey 17 holes, and then the gods give you that birdie on the 18th to keep you coming back for more.”