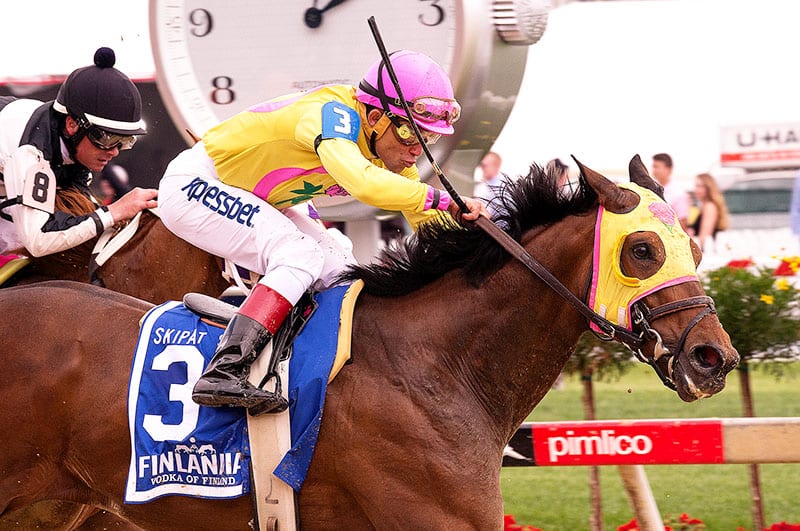 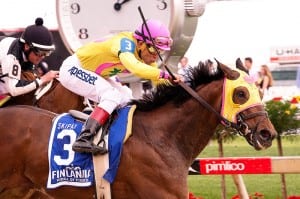 Joel Rosario picked up the mount on Lion D N A this morning. A few hours later, he drove her to victory in the $100,000 Skipat Stakes, a six-furlong test for fillies and mares.

Michael Dubb, Bethlehem Stables and Gary Aisquith own the 5-year old daughter of Lion Heart, who is trained by Rudy Rodriguez at Aqueduct. Lion DNA and Rosario raced in third much of the way, tracking a head-to-head duel between Flattering Bea and post-time favorite Winning Image. She caught them nearing the finish and completed the distance in 1:11.09 over the sloppy going. Flattering Bea finished second, three-quarters of a length behind the winner, while Winning Image was third.

“The shorter field really helped. My horse relishes the slop,” said Gary Asquith, owner of the winner.  “It’s a wet track today. The race set up perfectly for us, because there was speed up front. That helped us out and gave us a shot in the last half furlong.”

Lion DNA paid $11.20. The Skipat score was her third stakes victory for Rodriquez in her last five starts, having annexed both the Interborough and Correction Handicaps this winter at her home base.

Rosario, who piloted Lion D N A, hopes that this effort was a precursor to bigger things tomorrow, when he rides Ride on Curlin in the Preakness.

“I tried to send her a little bit,” the journeyman jock explained.  “I just let her sail and let her make the one run.”