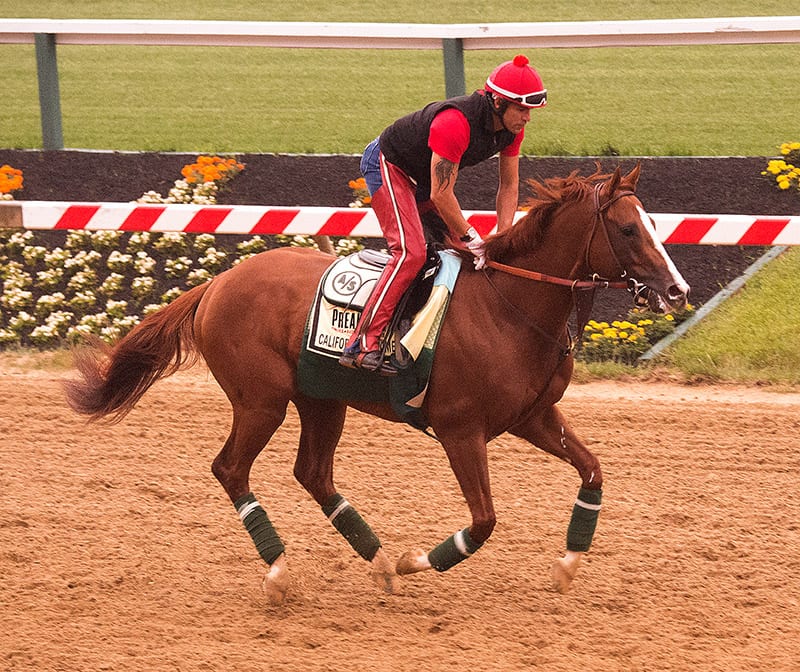 Sherman spent nine days between the Derby and the Preakness in California supervising his stable based at Los Alamitos, while his son, Alan, oversaw the daily training of California Chrome.

Art Sherman, 77, inspected the horse after flying to Baltimore Tuesday and watched him gallop under exercise rider Willie Delgado Wednesday shortly before 7 a.m. on a gray, damp, chilly morning.

“I thought it was a good gallop,” Sherman said. “He looked around quite a bit the first time around like he usually does. He’s a very inquisitive horse. Then he took a hold of the bit and was pulling pretty good the next time around. That’s his style and the way he gallops every day.”

California Chrome won the Derby impressively over a track surface that Sherman and his son said he tolerated. Sherman reported that the son of Lucky Pulpit appeared comfortable at Pimlico.

“He looked like he handled it really well.  It’s got a nice cushion on it, this track,” Sherman said. “It reminds me of the days I rode back here in the East. I always liked that kind of dirt. It’s different than the synthetic tracks. He’s run on four different tracks already so I don’t think you have to take the race track with him when he performs.”

Sherman’s one concern has been the 14-day turnaround between the Derby and the Preakness. So far, he is satisfied that California Chrome is ready for another demanding test.

“It always bothers me coming back in two weeks, like I think it does most trainers,” Sherman said. “It takes a horse a good 10 days to bounce out of a race good, but he’s holding his weight, which is a big factor. He’s eating good; he finished every oat last night. He seems to be thriving in this type of training, so I’m sure not changing anything. Let’s go for it.”

California Chrome was measured this week and Sherman estimated that Steven Coburn and Perry Martin’s homebred colt had gained 35 pounds since running in the Derby.

Sherman’s smile widened when asked if California Chrome was the horse to beat in the 139th Preakness.

“Well, I wouldn’t want to be in anybody else’s shoes right now, I’ll tell you that,” he said.

Later in  his conversation with the media outside the Preakness Stakes Barn, Sherman returned to the difficulty of coming back so quickly in the Middle Jewel of the Triple Crown against seven fresh contenders this year and in the Belmont Stakes another three weeks down the road.

“The challenge is there,” Sherman said. “I’m not one to run back in two weeks. I know it’s a tradition, but it’s hard on the horses. I can see where they have a lot of fresh shooters; they miss the Derby and then they come for you at the Preakness. It’s going to be even worse when I get to the mile-and-a-half race at the Belmont; they’re going to have a lot of horses in the wings waiting for me there.

“I’ve got to keep my horse happy and fresh and hope he’s in top shape. I don’t have to do much with him. He’s one of those horses that almost trains himself. He does what he has to do and you can see in the afternoon what he does. I don’t have to prove anything. He’s on a five-race winning streak. There is always pressure, but sometimes I look back at the races and he even blows my mind the way he moves away from the field – some good horses. I just keep my fingers crossed that he has a good trip.”

Although the Derby field included a number of horses that had shown speed in their careers, the race was run in a slow time. California Chrome could encounter a quicker pace scenario in the Preakness.

“The Preakness field is different to me because of the speed-laden horses that are in there,” Sherman said. “I’ve watched Bayern run at Santa Anita and he’s got a lot of gas. I’ve seen there are a couple of new shooters in here. Wesley Ward’s horse (Pablo Del Monte) has speed. Social Inclusion has speed. I’m just going off paper.

In the Derby, California Chrome beat 18 other 3-year-olds at 1 1/4 miles. The Preakness is one-sixteenth of a mile shorter with a field of 10.

“It’s always easier when you’ve got less horses. It’s less traffic,” Sherman said. “But with his style, if he comes away from the gate in good shape – there are three speed horses in here and he likes a target to run at – I really think that with good racing luck he should be in a position where he’ll be in the clear.”

As for the prospect of running his horse on a wet track – there is rain in the forecast for Friday –Sherman said he is not concerned.

“I’m not going there until I see the racetrack, but knowing this horse, I don’t really think the racetrack is going to have a lot to do with it,” Sherman said. “He seems to handle just about everything that we’ve tried. I’m from the old school. If you’ve got a horse that can run, he runs on anything: grass, dirt.  A runner is a runner. You can’t make excuses about racetracks.”

California Chrome is scheduled to gallop Thursday at 6:45 a.m. Sherman, who has plans to school his Derby winner in the gate and the paddock, will be available to the media between 7:30 and 8 a.m.