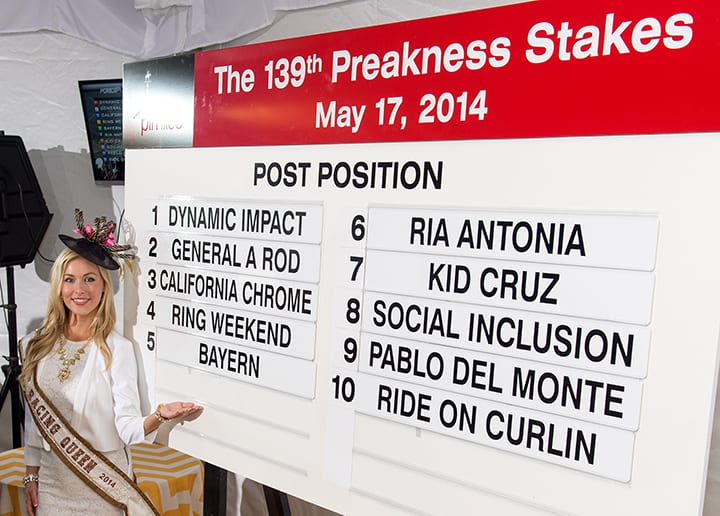 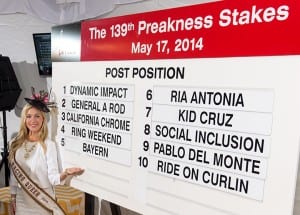 A festive and mildly boozy crowd gathered in the International Pavilion in the Pimlico infield Wednesday night for the post position draw for the 139th Preakness Stakes, to be run Saturday evening at 6:20 p.m.  It will be the 12th of 13 races on Saturday’s Pimlico card.

Pimlico linemaker Keith Feustle predicted that the bettors would hammer the Derby winner at the windows and installed him as the 3-5 morning line favorite.

Ride on Curlin’s trainer, “Bronco” Billy Gowan, has complained about the traffic trouble his horse often seems to encounter.  Following the Kentucky Derby, in which his horse finished seventh after being last of 19 early, Gowan suggested he’d rather run races with chickens aboard than jockeys.

His horse drew the outside post, the 10-hole.  “If I’da been in the 10-hole in the Derby, I would have been tickled to death,” Gowan said.  He added that he thought there would be enough speed inside of his horse that his new rider, Joel Rosario, would be able to find a good spot from which to run.

Second choice Social Inclusion — 5-1 in the morning line with just one stakes start, a third in the Grade 1 Wood Memorial, under his belt — found himself in the eight hole.

“With Ria Antonia and Kid Cruz inside with less speed and with two speed horses outside, that’ll help us,” said owner Ron Sanchez.  “We’ll be in good position in the early stages.”

Ria Antonia, the lone filly in the field and the first to contest the Preakness since Rachel Alexandra won it 2009, is the longest shot on the board at 30-1.  She’s in the six-hole.

Dynamic Impact, riding a two-race win streak, drew the dreaded one-hole, but his connections professed no concern, pointing out that their horse had won from that spot in the Grade 3 Illinois Derby.  “It’s obviously not ideal, but we’re not going to be too upset about it,” said assistant trainer Norman Casse.