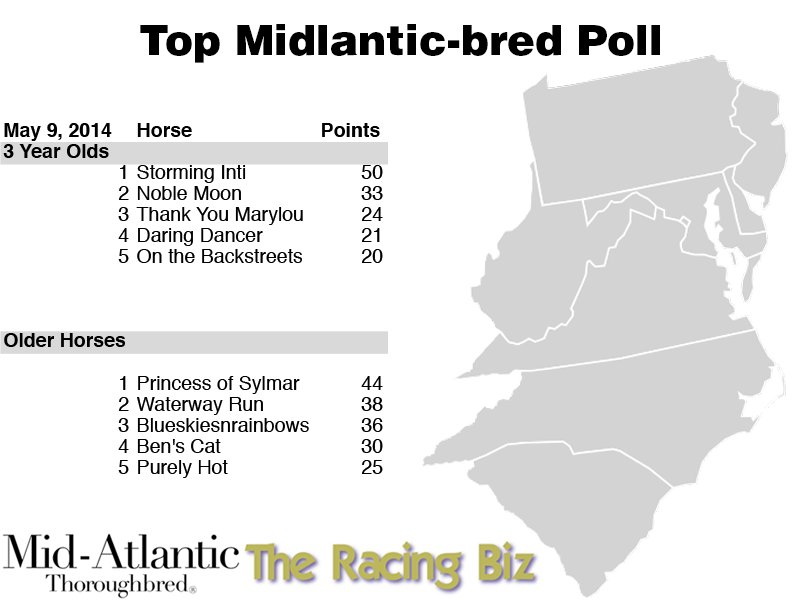 There is a new leader of the sophomore set in the mid-Atlantic.  Pennsylvania-bred Storming Inti moved to the head of the class in the latest Mid-Atlantic Thoroughbred/The Racing Biz Top Midlantic-Bred Poll, announced today.  He displaced Virginia-bred Noble Moon, who slipped to second.

Storming Inti was bred by Brushwood Stable.  He’s a son of Stormy Atlantic out of the unraced Pulpit mare Tarfaya.  He opened voters’ eyes this past weekend by running a game second in the Grade 2 American Turf at Churchill Downs.  In that race, he took over the lead after a half-mile, opened a clear advantage, but was nipped at the wire by Global View.  It was the second time this year that Storming Inti, who is owned by Santa Rosa Racing Stables, had placed in a graded event.  His overall record is 8-4-1-2, and he has earnings of $315,455.

Storming Inti’s efforts impressed voters enough to displace Noble Moon atop the list.  Noble Moon, winner of the Grade 2 Jerome, has not raced since finishing sixth in the Grade 1 Wood Memorial.

The other big mover among the three year-old set was On the Backstreets, a Pennsylvania-bred Street Boss filly.  Her May 2 win in the Ultrafleet Stakes at Santa Anita, her second stake win of 2014, moved her into fifth position, knocking the now-retired Gracer from the top five.

Among older horses, Princess of Sylmar, who was idle, held a narrow lead over the week’s biggest mover, Waterway Run.  Princess of Sylmar is slated to make her next start — her second of 2014, after an easy win in the Cat Cay at Aqueduct — in the Grade 1 Ogden Phipps on Belmont Stakes day.  Bred by Ed Stanco and running for his King of Prussia Stable, she is a daughter of Majestic Warrior out of the stakes-placed Catienus mare Storm Dixie.  She has a 12-9-1-0 ledger and earnings of $1,667,220.

Waterway Run caught voters’ attention with a win in the Grade 3 Beaugay at Belmont Park last weekend.  A Pennsylvania-bred filly, the four year-old is by Arch out of the winless Dixieland Band mare Princess Consort.  She was bred by Dorothy Matz and is owned by Martin Schwartz.  Her win in the Beaugay was her first in graded company — she placed in the Grade 3 Hillsborough earlier in the year —  and her first in North America, where she is now based after having begun her career in England.  She has an overall record of 11-4-2-0 and earnings of $182,789.

The other newcomer to the list of older horses was Maryland-bred Purely Hot, who won the Grade 3 Whimsical on the synthetic at Woodbine April 26.  The six year-old mare is by Pure Prize out of the winning Kissin Kris mare Wood Not, and she was bred by Dr. & Mrs. A. Leonard Pineau.  She’s owned by Unlimited Equine LLC and has a win and a third from two starts this year.  She has a career record of 29-12-3-4 and earnings of $409,525.

Six of the top 10 horses were fillies or mares.  Overall, four Pennsylvania-breds, three Maryland-breds, and three Virginia-breds populated the poll.  Among three year-olds, voters focused on just a handful; only 11 horses received even a single vote for a top five slot.  Conversely, 17 older horses received at least one vote.

This marked the fourth semi-monthly edition of the poll.