As Monmouth Park opens, change is a way of preservation 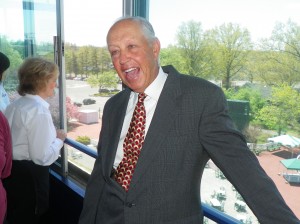 When Monmouth Park opens its 69th season Saturday afternoon, there will be a host of changes, both on the racing end and also away from the track.

It’s all in an effort to help save one of the East’s most picturesque racetracks in an industry that has certainly seen better times in the Garden State.

“We’re going to preserve Monmouth Park for our grandchildren to enjoy,” said lawyer Dennis Drazin, who advises Darby Development and the New Jersey Thoroughbred Horsemen’s Association, which operate the track.  “We want to turn Monmouth Park into a destination-type resort. We’re excited about the future of Monmouth Park, and we have a lot of new things on the horizon. You should see a lot of work going on as the season progresses. It’s a team effort here with the horsemen, owners and trainers, and I’m expecting a big season.”

First, there are the changes on the track. Monmouth Park is offering trainers and owners bonuses for simply entering their horses in non-state bred races.

For those horses running out of the money, that will make a big difference.

“It’s giving owners and trainers more incentive to enter horses,” said Bob Kulina, the president of Darby Development LLC, which now operates Monmouth Park. “So you’ll have more horses, bigger race fields and in turn, lead to bigger handles. It will also lead to better racing. Our belief is that this will provide incentive for people to want to race here.”

Over the course of the 2013 meet, the race fields averaged 7.8 horses per race. Kulina predicts that the new bonus system will increase the average fields to almost nine per race.

“We could only do so much to try to encourage owners and trainers to want to race here,” said Kulina. “I expect a full complement of about 1,500 horses in our stalls come July.”

While perennial Monmouth Park favorite jockey “Jersey Joe” Bravo, so known for his endless summers spent at Monmouth, will take his talents to New York this summer, Kulina feels that there are other jockeys who will pique the bettors’ interests.

“For Joe’s sake, I hope he’s successful there,” Kulina said. “It’s no secret that we see some New York horses here and I can see Joe coming down here to ride. New York has the strongest and deepest jockey colony in the business. I hope Joe becomes a top 10 rider in New York. But I don’t think it will be a case of who is here and who isn’t here.”

“From the customers’ point of view, there was so much on their plate,” Kulina said. “Even in the summer, people don’t take off on Thursdays. But with 12 races each day, that’s 36 races each weekend and that works well for us. Attendance was up last year and I expect it to be up again this year. We just have to let the races start playing out and see what happens.”

Kulina is also excited that the William Hill Haskell Invitational, the crown jewel race of the meet July 27, will be televised nationally on NBC.

“That’s a big deal,” Kulina said. “Being on national TV is a big deal. We’re very excited about that.”

Meanwhile, off the track, Monmouth is seeking to make better use of its large parcel of land.

Drazin, for one, is ecstatic about some of the plans in store. Monmouth Park just reached an agreement three weeks ago with AEG Entertainment, the nation’s top event promoter, to build a $10 million amphitheater that will seat 7,500 customers, with a roof covering approximately half of that projected audience.

“We plan on doing about 20-to-30 shows per year,” Drazin said. “We’re also going to build restaurants near the concert venue, one to feature upscale fine dining with room for 400 customers, inside and outside.”

There are also plans to build a boardwalk-style entertainment area, with games of chance and rides, that will be near the general entrance to the park.

Drazin said that Monmouth Park has already reached an agreement with Morris Bailey of Resorts International to build a hotel within the grounds of the park, but that is more than likely on the drawing board for the 2016 season.

Of course, a lot of the plans are contingent upon the New Jersey state legislature allowing casino-style gaming like slot machines and roulette wheels outside of the current Atlantic City infrastructure. Those plans will also include legalized sports betting, of which Monmouth and partner William Hill hope to be a major part.

“I’m confident that it will expand past Atlantic City,” Drazin said. “And when it does, Monmouth Park will be a part of it. When that happens, then the purses should grow and that will benefit us in the long run. We have to wait and see what develops. Our state legislature has been good to racing in the past.” 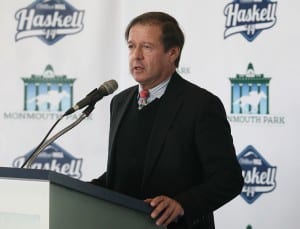 Dennis Drazin,adviser to the New Jersey Thoroughbred Horsemens Association and Darby Development, the operator of Monmouth Park, speaks at the Opening Day Press Conference and Luncheon at Monmouth Park Racetrack in Oceanport, New Jersey on Tuesday May 6, 2014. Photo By Bill Denver/EQUI-PHOTO.

If and when the state legislature agrees with Drazin, then, “Monmouth Park will be well positioned, not just this year, but for years to come,” he added.
Drazin said that he was comfortable with the leadership of Kulina, who has been involved with Thoroughbred racing at Monmouth Park for the last 42 years.

“He’s dedicated himself to Monmouth Park for as long as anyone can remember,” Drazin said. “We all owe a debt of gratitude to Bob Kulina and his staff. They’re going to make us a success.”

“When we changed ownership three years ago, 95 percent of my staff stayed with me,” Kulina said. “We keep sprinkling in some younger people, but basically, we’ve all stayed the same.”

So while Monmouth Park’s leadership remains the same, there are other aspects, both on the track and off, that have changed.

The 57-day meet begins Saturday, with post time at 12:50 p.m. every Friday, Saturday and Sunday through the summer.