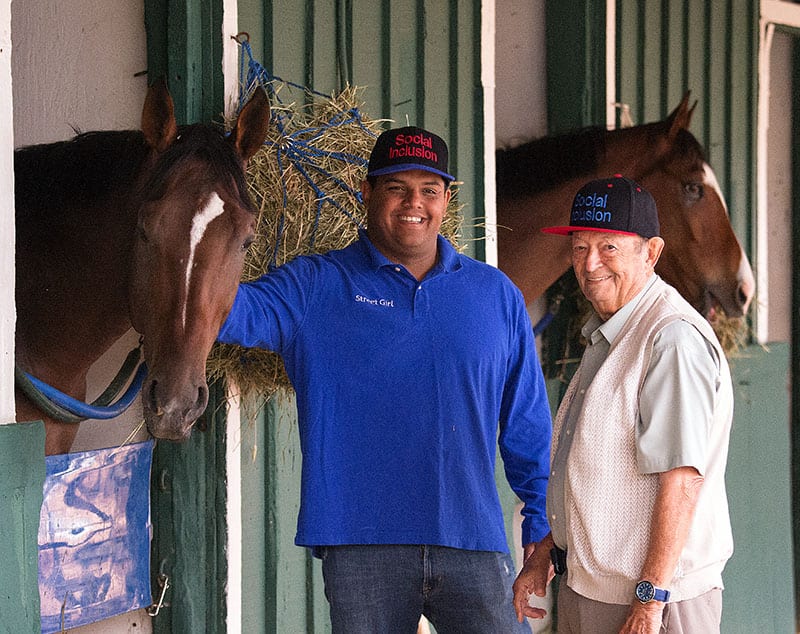 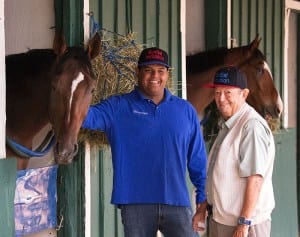 The 77-year-old Art Sherman, who became the oldest trainer to saddle a Kentucky Derby winner last Saturday with California Chrome, is just a kid to Manny Azpurua. The 85-year-old South Florida-based trainer was on hand at Pimlico Race Course Thursday morning for the arrival of his stable star, Social Inclusion, who is scheduled for a run in the 139th Preakness Stakes on May 17.

Azpurua, not Sherman, will have the opportunity to become the oldest trainer to send out the winner of the Middle Jewel of the Triple Crown and eclipse the record of legendary “Sunny Jim” Fitzsimmons, who was 82 years and 10 months old when he scored with Bold Ruler for a 1957 Preakness victory.

“We’ll see if we can make it,” the soft-spoken Azpurua said. “I expect him to run a good race.”

Social Inclusion, who finished third in the Wood Memorial (G1) at Aqueduct in his most recent start, arrived at Pimlico at 5:48 a.m. Thursday following an 18-hour, 44-minute van ride from Gulfstream Park in Hallandale Beach, Fla. He was accompanied by assistant trainer Roberto Riasco, who has worked for Azpurua for 39 years. Hey Leroy, who will run in the $400,000 Dixie Stakes (G2) on the Preakness undercard, also made the trip.

The 3-year-old son of Pioneerof the Nile walked the shedrow of the Preakness Stakes Barn with good energy before being bedded down in his stall. Owned by Rontos Racing Stable Corp., Social Inclusion was showing no ill effects from a foot bruise that kept him out of the Sir Bear Stakes at Gulfstream last Saturday.

Social Inclusion is the first Preakness candidate during Azpurua’s long and successful career that includes more than 3,500 winners in his native Venezuela and nearly 950 winners in the U.S.

“It’s my first time. You know how you feel when you do anything the first time. It’s exciting,” he said. “He may be the best horse I’ve trained. I’ve had a lot of nice horses in my country and here.”

Social Inclusion debuted for Azpurua at Gulfstream on Feb. 22 while running six furlongs in 1:09 1/5 and scoring by 7 ½ lengths. The late-developing Kentucky-bred colt came back on March 12 to break the Gulfstream track record for 1 1/16 miles, defeating favored Honor Code by 10 lengths in 1:40 4/5.  Making the jump from entry-level allowance to Grade 1 company, Social Inclusion raced wide on the first turn before setting the pace and coming up short in deep stretch to finish third behind Wicked Strong and Samraat.

“In the Wood Memorial, I believe he learned a lot,” Azpurua said. “I’m so pleased the way he ran. I think he’s going to run a good race. He’s been doing everything I’ve asked him. He’s got his mind on running.”

Azpurua is planning to send Social Inclusion to the racetrack at 8:30 a.m. Friday to get acquainted with the Pimlico surface during a once-around jog and once-around gallop.

Luis Contreras, who has been aboard Social Inclusion in all three of his career starts, has the return mount for the Preakness.