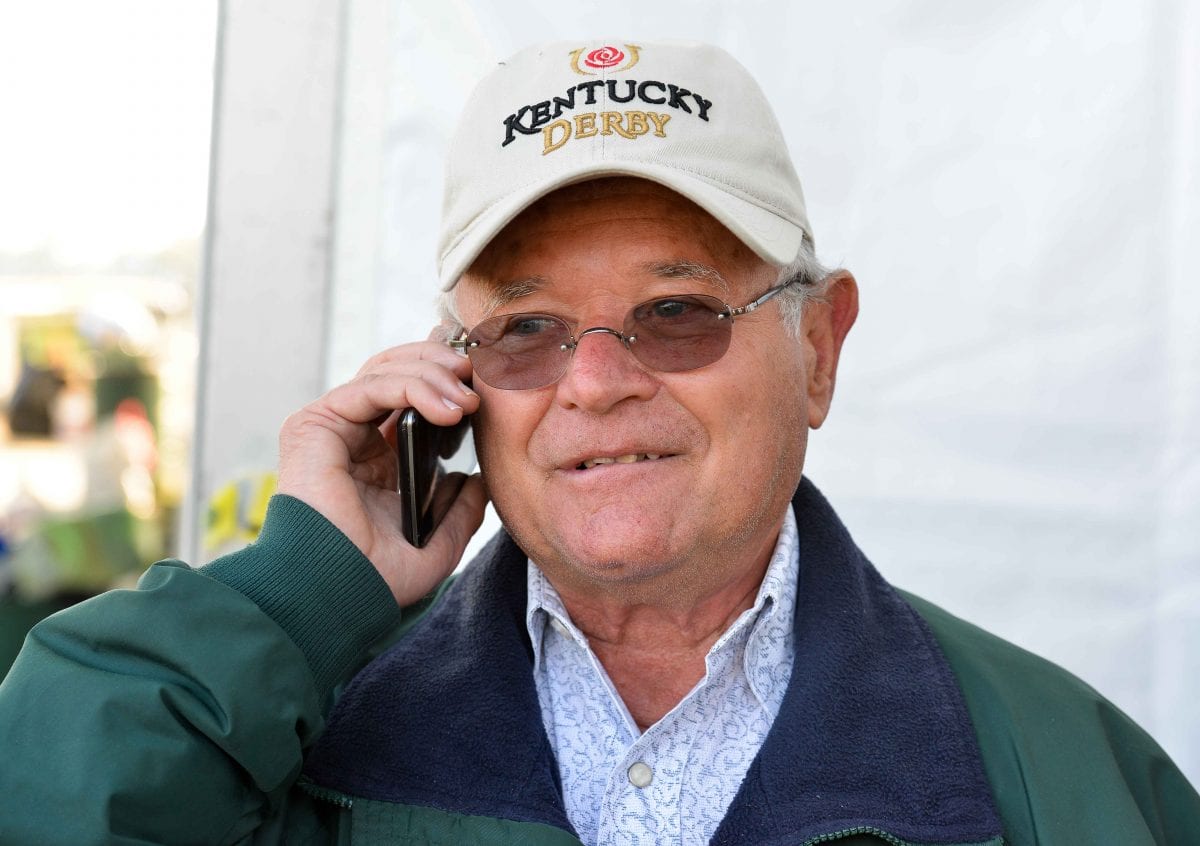 California Chrome stood in the gap leading to the track for about five minutes and did not move a muscle as photographers recorded the scene and horses went to and from the track. After the exercise, California Chrome walked quietly back to Barn 20.

“His temperament is excellent,” said Alan Sherman, assistant to his father Art Sherman, who is back at Los Alamitos and will reunite with the Derby winner in Baltimore next week. “He got a little fired up on the walkover (before the Derby) but he settled down once he got in the paddock.”

“I think he just tolerated the track,” Sherman said. “This track is deeper and sandier than at Los Alamitos and the dirt is different. It is a lot darker at home. But, they don’t pay any more to break track records.”

California Chrome is expected to ship to Maryland at the earliest on Monday if the charter flight is available. For Delgado, it is a trip back home; for Alan Sherman, it’s a first.

“Never been there,” Sherman said. “I think my dad rode at Bowie. I am 45, and that was long before I was around.”

Sanchez, 28, gets on a lot of horses for Ward and is very familiar with Pablo Del Monte, though the Preakness will mark his first time on the colt in a race.

“He’s worked him throughout his whole life,” Ward said. “He’s a rider who has won the Breeders’ Cup, the Juvenile Fillies, with Awesome Feather. He won all the races on Awesome Feather (who was 10-for-11 in her career) and he’s won for me in many different countries. In Europe, he’s won races in France for me at Longchamp and Chantilly. He rode Madman Diaries when he was the Sovereign Award winner as the champion 2-year-old colt in Canada. He’s won lots of stakes races for me, but he’s the kind of guy who flies under the radar a little bit.”

Sanchez was named on Pablo Del Monte for the Kentucky Derby, but Ward scratched and pointed to the Preakness rather than have his homebred start from post 20.

“He’s a strong rider but that hinders him a little bit because he’s muscular and he’s a little heavy,” Ward said. “But I’ve had a lot of luck with him; he works very hard and is a very nice young guy.”

Pablo Del Monte is training at Keeneland and is scheduled to arrive at Pimlico on Wednesday.

Daniel Dougherty’s Ride On Curlin walked to the track from Barn 47 at Churchill Downs to the six-furlong gap, where exercise rider Bryan Beccia hopped aboard and then followed with an easy gallop of 1 1/8 miles.

If the charter flight is arranged to take Derby winner California Chrome and Ride On Curlin to Baltimore on Monday, Gowan said he will have the colt gallop a mile Tuesday and work an easy half-mile at Pimlico on Wednesday.

“The seasoning definitely helps and I think it is a big advantage,” Gowan said of his battle-tested colt. “Now if we can get a little more early pace this time; it may not hurt him (California Chrome), but it will help us.”

Dougherty, who will have two 2-year-olds joining the Gowan barn soon, is slated to arrive in Baltimore Tuesday for his initial visit to Pimlico. Beccia, however, has been to Pimlico before as the exercise rider for 2001 Kentucky Derby winner Monarchos.

Monarchos ran the second-fastest Derby in history, but failed to reproduce that form in the Preakness, finishing sixth behind Point Given, a colt he had beaten by 11 ½ lengths in the Derby.

“Monarchos came out of the Derby just as good as Ride On Curlin,” Beccia said. “Monarchos shipped good and trained well. He was a happy horse and you can look at pictures of him galloping in the stretch with his ears pricked.

“Unfortunately, the real Point Given showed up (at the Preakness). Hopefully, after the Preakness and Belmont, the real Ride On Curlin will have shown up.”

Trainer Linda Rice has notified the Maryland Jockey Club’s racing office that she intends to ship Kid Cruz from Belmont Park to Pimlico on Monday. Kid Cruz is scheduled to have his final Preakness work this weekend at Belmont Park.

Five-time Preakness winning trainer Bob Baffert conditions Bayern and he is following a pattern he has used for his past five Preakness starters by having them train at Churchill Downs for a week and a half after the Kentucky Derby and ship to Baltimore the Wednesday before the race.

Baffert’s five Preakness victories are good for a tie for third all-time behind only Robert Walden (seven) and D. Wayne Lukas, who got his sixth last year with Oxbow. Baffert is tied with Thomas Healey.

Lookin at Lucky in 2010 is Baffert’s most recent Preakness winner.

Trained by Mark Casse, who has not had a Preakness starter, Dynamic Impact is scheduled to work Saturday at Churchill Downs with jockey Miguel Mena slated to be in the saddle.

After finishing sixth in Friday’s Kentucky Oaks (G1), Ria Antonia was moved from Baffert’s barn to Tom Amoss, who trains a string of horses for Ron Paolucci of Loooch Racing.

“That’s the first time I have had one moved into my barn that close to a Grade 1 race,” said Amoss, who has Ria Antonia scheduled for a Monday work.

However, Ria Antonia was not a total unknown to Amoss.

“I did not see her last fall when she was in the Breeders’ Cup, but I got to watch her train for two weeks before the Oaks when she came out in the 8:30 time slot (reserved for Oaks and Derby horses),” Amoss said. “She was very impressive and that is what I want to see now.”

Tampa Bay Derby winner Ring Weekend is slated to have a breeze on Saturday that will be pivotal in trainer Graham Motion’s decision whether or not to enter him in the Preakness.