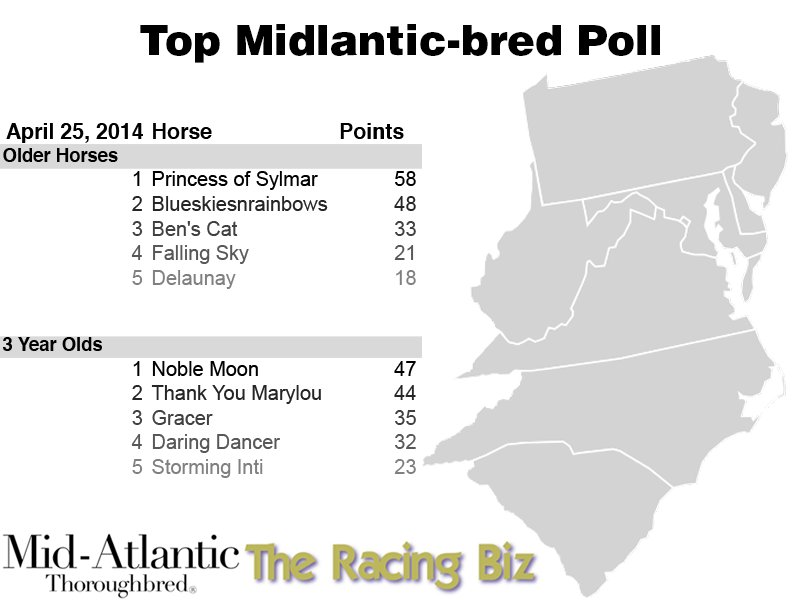 The four year-old Princess of Sylmar, bred by Ed Stanco and running for his King of Prussia Stable, is a daughter of Majestic Warrior out of the stakes-placed Catienus mare Storm Dixie.  After a productive 2013, in which she won six of eight starts, four in Grade 1 company, she kicked off her 2014 season with an easy win in the Cat Cay Stakes at Aqueduct.  Her schedule seems likely to take her next to the Grade 1 Ogden Phipps on Belmont Stakes day.

Princess of Sylmar took over the top spot from Virginia-bred Blueskiesnrainbows, who had held it for the first two editions of the poll.  Neither horse has raced since the last poll.

A handful of horses received votes for the first time without cracking the top 5.  These include Down Town Allen, the seven year-old mare who posted the 20th victory of her career last Saturday, in the Original Gold for West Virginia-breds, at Charles Town; Maryland-bred Hamp, who won Saturday’s Henry S. Clark at Pimlico; and Pennsylvania-bred Roadhog, a near-miss second to Hamp.

Among the sophomores, Grade 2 Jerome winner Noble Moon continued to cling to a narrow lead, though his nearest pursuer changed.

Noble Moon, a Virginia-bred son of Malibu Moon out of the winning Kingmambo mare Mambo Bell, finished sixth in the Grade 1 Wood Memorial in his most recent start.  Bred by the Estate of Edward P. Evans, he is trained by Leah Gyarmati for Treadway Racing Stable.

For the second straight week, he held just a three point lead over the second-place horse — but it was a different horse this time.  Last time, now-retired Gracer held second; she has now fallen to third, replaced by Virginia-bred Thank You Marylou, most recently third in the Grade 1 Ashland.

The big mover among the junior set was Maryland-bred Daring Dancer.  The Sagamore Farm homebred, trained by Graham Motion, won last Saturday’s Grade 3 Appalachian in her seasonal debut, running her record to a perfect three-for-three.

Other newcomers receiving consideration without cracking the top 5 included Pennsylvania-bred Supermonic, recently third in the Grade 3 Lexington; Elevated, another PA-bred, who ran second in the Robert Hilton Memorial at Charles Town; and a pair of Virginia-breds, Miss Besilu and Midnight Dream.

This marked the third semi-monthly edition of the poll.