Robert “Bobby” Abbo presented a face to the world — direct and demanding — that could not mask a warmth and generosity that drew people to him and touched countless lives over the years.

Abbo, who died yesterday at age 70 following a year-plus battle with leukemia and a recent heart attack, had achieved racing success most recently as the owner of nine year-old millionaire Immortal Eyes.

Friends recalled his charitable works, his eclectic circles of friends, and his love of — and remarkable success in — horse racing.

Abbo, who was born in Washington and became an All-Met football player at Georgetown Prep, inherited from his father Frank the Roma, an Italian restaurant founded in the 1920s, as well as an oyster bar and Poor Robert’s, the bar that Frank built for and named after him.

“He was gruff, intimidating, but soft in the center,” said racing writer John Scheinman, who met Abbo more than 20 years ago, becoming a regular at Poor Robert’s until it closed in 1997.  He recalled an evening when, having learned that one of his customers had been laid off that day, Abbo bought the person and his friends champagne all night.  “That’s the kind of guy he was,” Scheinman added.

Vinnie “Baretta” Emerson, a longtime employee of Abbo’s at both the Roma and Poor Robert’s, concurred.  “I will always remember the way he worked his ass off in the restaurant,” Emerson said, “and how he treated all his customers.”

The bar and restaurant became for residents of the neighborhood a kind of town square, a home away from home, “a great, great, great place,” Scheinman called it.

For customers, the attraction was part atmospheric — a dark place for sports fans and gamblers — and part technological, as it was among the city’s first watering holes to have a satellite dish.  But mostly it was familial.

“It kind of spanned generations,” said Emerson.  “Poor Robert’s was always like Bobby’s friends, but a lot of them had gone to the Roma with their parents.  When it closed, some of these regular customers were just wandering around looking for a place to go.  People couldn’t deal with life without Poor Robert’s and the Roma.”

Vas — just Vas — a photographer who frequented Poor Robert’s, often went there to watch football games on which he may, or may not, have wagered.  “Bobby would hang around and ask people who had wagers, ‘Who do you have?'” he said.  “I think he had bet but wasn’t betting anymore, but it was like a contact high.”

Racing writers Andrew Beyer and William Nack were among the bar’s regulars and remained friends with Abbo in later years.

Mark Lapidus, who owns the stakes winner Service for Ten, grew to know Abbo through racing and recalled a dinner at the house Abbo shared with his wife Marcia.  The other guests included Beyer and Nack.  “I felt like I was with celebrities,” Lapidus recounted.  “I’m star-struck.”

Abbo enjoyed mid-2000s success as a horse owner with Better Than Bonds, a Sweetsouthernsaint colt who won a couple of stakes and more than $500,000.  But Lapidus helped make the connection that would bring Abbo his greatest racing triumphs.

“I was with him when he first saw [Immortal Eyes] in Florida,” Lapidus recalled.  “The horse just didn’t seem happy down there.”

Lapidus recommended he send the horse north, to Damon Dilodovico at Bowie.  He did that in early 2010.

“I remember when he first brought the horse to Bowie,” said Lapidus.  “He was in shock — it was like a third world nation to him.  You could see it in  his eyes.”

Bowie may not have been much to look at, but Immortal Eyes loved it there.  Three races later, Immortal Eyes won his first stakes race.

But it wasn’t until last year, as an eight year-old, that Immortal Eyes truly hit his stride, enjoying his most productive season with six wins, five in stakes company, and earnings of more than $427,000.  He put the exclamation point on his season with a nearly seven-length win in the rainy De Francis Dash last September.

“This is it,” trainer Damon Dilodovico told him after the race.  “This is the top.”

Abbo, already fighting the cancer, repeatedly choked up in the minutes following the race, and he wasn’t the only one.

“I was bawling like a baby,” said Christine Dilodovico, Damon’s wife and Immortal Eyes’s groom and best buddy.  “It wasn’t all the rain.”

“Something like this,” Abbo joked later, “it’s better than a transfusion, believe me.” 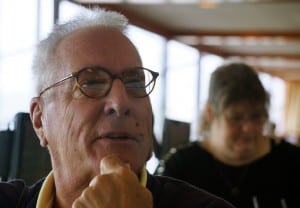 His main charitable work, however, came through his Poor Robert’s Charities.  That organization provided needed vehicles as well as financial support to many area non-profits, including St. Ann’s Center for Children, Youth and Families, which last April awarded him its Mary McGrory Advocacy Award.

“He did a lot of good for people,” observed Mike Geralis, a horse trainer who worked with Dilodovico before striking out on his own earlier this year.  One of the horses in his small barn is an unraced three year-old of Abbo’s, Hush Hush Henny.

“He’s somebody who stayed close to his Catholicism with his charitable work,” Vas, the photographer, said.  “He just had a feeling for people.”

It was a feeling that many people reciprocated.

In late March, Vas and two friends of his who were also friends of Abbo’s — filmmaker Jeff Krulik and Tony Kotler — drove out to Charles Town for Immortal Eyes’s seasonal debut, Vas filming the excursion.  Immortal Eyes won by a measured half-length that day, and they packaged the videos up and sent them to Abbo, who by then was in the hospital for what turned out to be the final time.

“Mr. Abbo had sent me this really nice email saying this had touched him,” Christine Dilodovico said.  “This was very special.”

Up until the last week, Abbo stayed in near-daily contact with Dilodovico and Geralis, keeping up-to-date on his horses.  “He had a tremendous passion for the sport,” said Scheinman, the writer.  “He loved it.”

And perhaps that helped his frame of mind.  “He was still pretty positive the last few weeks,” said Vinnie Emerson.  “But he was realistic about what he was facing.”

He’d lived, by most accounts, a large life, one that afforded a certain perspective.  “He used to give me lectures for my own good,” Emerson said.  “He’d say, ‘Just take it easy out there at the track.  You don’t have to bet a lot.'”

“He didn’t leave anything on the table” when he passed, added Scheinman.

He is survived by wife Marcia.  No word yet on funeral arrangements.